Going into this season the Lions had every right to be written off after being gutted by expansion in recent years as well as losing convincingly to Carlton in its quarter-final last year before the season was ultimately terminated due to the COVID-19 pandemic.

However, during the off-season, Craig Starcevich’s side were able to reset and what we saw this season was a return to the basics that saw them reach the grand final in the first two seasons of the league.

They lost only two regular season games – against the Adelaide Crows at home in Round 4, while they also missed the chance to claim a second minor premiership in five games when they lost to Melbourne in the final round.

A win against Collingwood in the preliminary final, which followed a week off, saw them qualify for the big dance for the third time, and Lions fans were hoping it would be third time lucky.

Standing in their way of the ultimate prize were the Adelaide Crows, who had won two of the first three flags and entered the decider as the reigning premiers from 2019 (after last year’s grand final was not held due to the season’s early termination as mentioned above).

But the Crows would be without their skipper, Chelsea Randall, after she was ruled out of the decider after she suffered a head knock in her side’s preliminary final win over Melbourne.

New concussion protocols stipulate that a player who suffers a concussion injury must not play for up to twelve days starting from the day in which it occurred.

In Randall’s absence, Angela Foley was given the honour of leading the Crows out onto their second grand final at the Adelaide Oval in three years, and third overall.

It was also to be the second grand final between the two sides after they also contested the inaugural decider in 2017, which the Crows won by six points at Metricon Stadium.

Pre-match predictions of a close contest held true when, at quarter-time, the two teams were locked at 6-all. Courtney Hodder landed the first goal of the game for the Lions, but Stevie-Lee Thompson replied for the Crows’ first.

The Crows continually sent the ball forward in the second quarter, but for nine inside-50s could only muster a goal to Danielle Ponter, before the Lions hit back with goals to Hodder and Jess Wuetschner to put them up by five points at halftime.

A brutal third quarter saw both match-day captains – Emma Zielke (Lions) and Angela Foley (Crows) – suffer significant injuries that would see them sit out the rest of the match.

Zielke, who promised to her coach that she would retire if the Lions won, went down with a hamstring injury while Foley suffered the dreaded ACL injury which will almost certainly see her miss the entire 2022 season as she undergoes a twelve-month recovery period.

In what is typically known as “the premiership quarter”, the Lions kicked three goals to nil in that quarter – through Wuetschner, Lauren Arnell and Isabel Dawes – to all but have the cup sewn up by the final change of ends for the season.

Eloise Jones pegged back a goal for the Crows in the final quarter, and did all they could to reel in the margin but the Lions’ defence were able to repel the hosts’ forward forays, making up for a goalless final quarter.

And so, after years of near misses, as well as losing players to other clubs and a freak lightning injury suffered by Jess Wuetschner in 2019, the Brisbane Lions became queens of the AFLW jungle for the first time.

It was also major reward for coach Craig Starcevich, who was named the AFLW Coach of the Year earlier in the week for his efforts in keeping the Lions up there among the flag contenders and ultimately guiding them to the decider.

His first premiership as a coach comes 31 years after he featured in the Collingwood men’s side that broke its 32-year premiership drought against Essendon in 1990.

That Magpies side was coached by Leigh Matthews, who would later coach the Lions men’s team to a hat-trick of flags at the turn of this century.

There is also plenty of correlation to come out of the Lions’ men’s and women’s first AFL flags.

The men’s side had lost to Carlton at the MCG in the previous year’s finals series (2000) and over twelve months later they would win their first flag by beating the reigning premier (on that occasion, Essendon) on their home turf.

Similarly, the Lions women’s team lost its semi-final to the Blues in Melbourne last year, and now their first flag has come after beating the reigning premiers (on this occasion, the Adelaide Crows) at the Adelaide Oval, where the Crows had never previously lost. 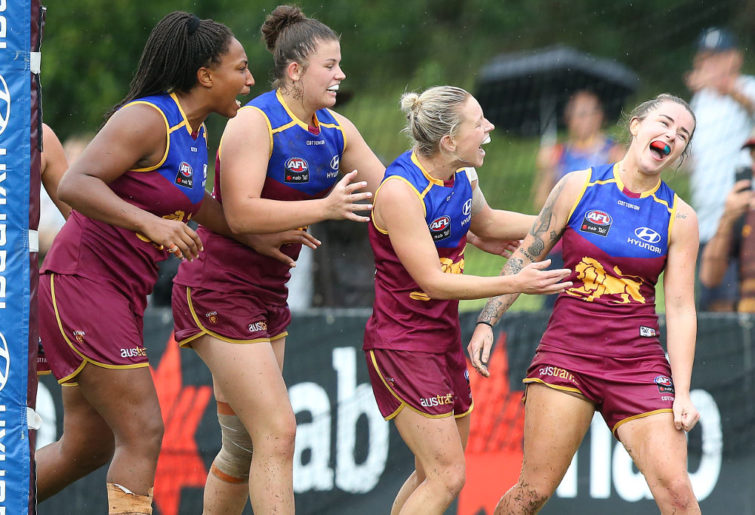 Optimistic Lions fans must surely be daring to dream of further flags in the next two seasons, which would emulate the efforts of their men’s team who went on to become the greatest premiership-winning team of the modern era.

It was also a fitting farewell for Zielke and Lauren Arnell, who became the first player in AFLW history to feature in the inaugural game (Carlton versus Collingwood in 2017) and win a premiership medallion.

As for the Crows, it was a disappointing end to a season which saw them hit back with a vengeance after missing the finals in 2020, but when the season was terminated they remained as the defending premiers for another twelve months.

While the absence of Chelsea Randall was telling, two-time grand final best-on-ground Erin Phillips endured a quiet match, while they will also be kicking themselves for not making their field dominance count on the scoreboard (they had 20 more inside-50s than the Lions).

There is speculation that Phillips, 35, will soon call time on her AFLW career with the knee injuries she has suffered during her professional basketball career taking its toll on her body and restricting her from training from the halfway point of the season.

One also wonders what ultimately could’ve been had Randall not been concussed in the preliminary final, which led to her missing the decider, or Foley not suffered a third-quarter knee injury which will almost certainly see her sidelined for season 2022.

But as they say, “you can’t win them all”, but that’s not to say that Matthew Clarke’s side will be back for another shot at the premiership in twelve months’ time.

To finish off, congratulations to the Brisbane Lions, premiers in the AFL Women’s competition for the first time, and may this be the first of many for the women from the sunshine capital.

And commiserations to the Adelaide Crows, who have also done well to advance to a third decider and I’m sure their shot at a third flag will come soon.

That wraps up the fifth AFLW season, where we have seen the holy grail awarded for the first time since 2019 and a third different team climb the premiership dais, the Lions joining the Crows (2017, 2019) and Western Bulldogs (2018) who have gone all the way since the league’s inception in 2017.