So I was excited to turn the telly on to find some serious rain and teams gambling between full wet or intermediate tyres on Sunday night. Right! I thought, we have some real racing on our hands!

Real racing we did see at the Emilia Romagna Grand Prix in Italy. The rain didn’t last too long and those in the minority who gambled on full wet tires quickly went back in the field when the weather eased.

At the front, some fantastic driving saw Max Verstappen take the lead early on and the spray meant he quickly got out of the DRS zone of Lewis Hamilton to put a handy gap on the championship leader.

Then, within a lap of each other, they both pitted for tyres.

Max was in first on Lap 28 for a swap from worn-out inters to a fresh set of slicks. Hamilton stayed out and put the hammer down, knowing it would be his last lap on the old inters before pitting on Lap 29.

It was a slow stop for Lewis, as there was an issue with the front right tyre that cost him an extra four seconds, which ensured Max maintained the lead. But with Lewis doing fastest laps to close the gab before they both found themselves in traffic to lap slower cars that had yet to pit.

This allowed Lewis to close the gap.

On lap 31, the rarest of events occurred, as Hamilton made a massive mistake. In trying to overtake a back-marker, flying up the inside on cold slick tyres, he came off the dry line and dove down the inside on the wet side of the track.

He couldn’t pull it up and it forced him to drive straight, avoiding the corner altogether (and the back marker thankfully), head straight for the sand, and luckily pull up before the barriers. 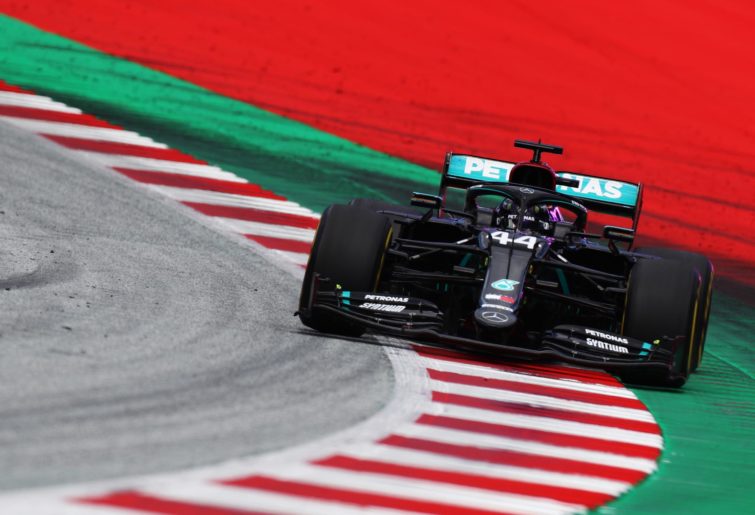 With a damaged front wing, he did the smart thing and got his car in reverse, after what seemed an age.

By the time it was all over, he was a full lap down and behind Daniel Ricciardo on track.

This is where things get a little confusing, as the coverage wasn’t clear. It was chaos working out at this stage where everyone actually sat in the race standings and who was on the lead lap when further carnage occurred.

George Russell attempted to overtake Valtteri Bottas down the high speed straight, where he put a tyre under acceleration on the grass, causing his car to spin to the left, straight into the side of Bottas.

The wreckage forced officials to red flag the race and order all cars back to pit lane while they cleaned up the mess. Thankfully, both drivers were unhurt, but there was some choice footage of George Russell giving it to Bottas as he believed he had caused the crash.

Replays show that is not the case and Russel had balked at Bottas maintaining the dry line.

The race resumed with a rolling start out of pit lane behind the safety car. Then we heard, with five minutes before the race re-started, that all of the lapped cars would be allowed out on track to unlap themselves before the restart of the race.

So once that was completed, Hamilton – who was a full lap down and sitting behind Ricciardo in sixth position – found himself in ninth position on the lead lap, with Lance Stroll and Kimi Raikkonen between him and Ricciardo.

But now they had the fastest car in the race prior to the crash back on the lead lap and hunting them all down.

The inevitable happened and Lewis slid his way through the field to take back second on the podium at the end of the race. With two laps to go and a dry track, with Max out in front and not needing to push it further, Lewis also took back fastest lap and an extra point.

Lewis managed to take a full 21 points from the race, keeping him in the lead of the championship.

I feel bad for the other seven drivers. Lando Norris had a fantastic drive and managed third on the podium, but was relegated from second, losing three points.

Charles Leclerc was off the podium and down to fourth where he lost a further three points – and so on all the way down to Stroll, who ended up in eighth.

All these drivers were legitimately on the lead lap and were arbitrarily relegated down the standings by one point because F1 rules allowed all lapped cars to get a free ride back onto the lead lap.

Had those cars remained one lap down at the restart, there’s no way Lewis could have gone all the way through the field twice before the race ended.

Remember, it was Lewis’ own driving error that had him a lap down.

F1 gifted Lewis Hamilton 16 points in the driver’s championship and took that many off other drivers through no fault of their own. What a farce this is, and something needs to be done to fix it.

I would hate to see this many points decide the championship but more than that it robbed Charles Leclerc of a podium and Lando Norris a second place.