Round 6 ratings and projections

Here are the Following Football ELO ratings for each of the 18 AFL clubs, and the predictions they present for the upcoming games in Round 6 of the 2021 season.

First to the ratings. At Following Football we use a version of the ELO system first created for gauging chess grandmasters. When two opponents are matched up there’s an expectation as to who will win – and, in footy, by how much.

The actual outcome is compared to this expectation, and the rating of each player (or team) is adjusted accordingly and identically in opposite directions.

For our sport it’s possible that a team can win but their rating can decrease – as an example, Geelong’s 30-point victory over the Kangaroos was substantially less substantial than expected, so to speak. So despite winning the game, their rating diminished by 2.6 points, while North’s increased by the exact same amount.

That’s a key to any ELO rating system – there’s a conservation of rating points among the teams, which for the AFL always totals 900.

Here are the current ratings, along with the changes from last week:

Let’s look at this week’s games.

GWS Giants (2-3, 49.6) versus Western Bulldogs (5-0, 73.8), Manuka Oval
Oddsmakers happen to agree with our 20-point Bulldog advantage. The Bulldogs are also 5-0 against the professional points spreads this season, so until someone stops them, I’m taking them plus the points (currently 19.5 officially; 20.3 from our ratings).

Geelong Cats (3-2, 52.9) versus West Coast (3-2, 59.5), GHMBA Stadium
This is the biggest divergence from the oddsmakers. They have Geelong by 10.5, while we have the Cats as 1.5 point dogs (pun intended). Watching the teams play, I can’t see Geelong as the better team in any way, shape or form. This is giving the ground far too much credit. I’m trusting our numbers and taking the Eagles to win outright.

Gold Coast Suns (1-4, 38.6) versus Sydney Swans (4-1, 55.9), Metricon Stadium
Sydney are playing well despite the hiccup against their crosstown rival and Lance Franklin’s newest injury. Gold Coast are hoping for a ruckman to fall from the sky (and not hurt himself in doing so). A margin of 9.5 points seems far too narrow between these two teams right now. Even our ELO-FF margin of 13.3 points Sydney’s way seems too narrow. It feels like it should be twice that. We’ll take Sydney plus the points.

Carlton Blues (2-3, 49.4) versus Brisbane Lions (2-3, 62.8), Marvel Stadium
The Blues’ wins are over the two most erratic clubs in the competition: GWS and Fremantle. Brisbane’s 2-3 hides a win taken from them by the officials (against Geelong) and losses to two of the hottest clubs in the competition, the Dogs and the Swans. They proved they can win on the road at GHMBA even if – yeah. Anyway, the odds say Brisbane by 7.5 (and rising). The ELO-FF says Brisbane by 9.5. We’re taking Brisbane to win by more than that.

Fremantle Dockers (3-2, 46.7) versus North Melbourne Kangaroos (0-5, 10.7), Optus Stadium
How a professional team publicly claims encouragement from a 30-point loss to a team that admitted they weren’t playing well is beyond me. It sounds like a recipe for disaster when travelling across the country to play a team that actually has a reason to be encouraged from last week’s performance. Our numbers agree with the oddsmakers: Dockers by 42. My mind says Fremantle won’t stop at 42. Take the points.

Melbourne Demons (5-0, 62.3) versus Richmond Tigers (3-2, 70.7), MCG
The game of the round. It’s not often you see an undefeated team as a two-goal underdog on its home deck, which is why I locked in the Demons as a 14-point dog on Monday. This morning it was down to 7.5 – our ratings have this game at 9.2 points in Richmond’s favour. The Tigers may well win this, but the combination of a Melbourne victory plus a one-goal game either way feels like more than 50 per cent to me. I’d still take this at 7.5 points for the Demons even if I suspect Richmond might win it. Melbourne must have been pointing to this game for a week or two, and there’s nothing immediately beyond it to be scared of – win here and Melbourne might well go into round 11 still unbeaten.

Hawthorn Hawks (1-4, 38.1) versus Adelaide Crows (3-2, 38.4), UTAS Stadium
I’m still shocked Adelaide aren’t the favourite in this game. Even in our ratings, given the familiarity of the ground for the Hawks, they get a bump for home-ground advantage that gives them a slight edge in the ELO-FF. I’m far more impressed with Adelaide’s body of work than with Hawthorn’s, highlighted by a one-point win in R1 over Essendon. I don’t need the 4.5 points; I’m taking the Crows to win outright.

Collingwood Magpies (1-4, 45.0) versus Essendon Bombers (1-4, 42.2), MCG
This is one of those games where the records really don’t matter, but it’s nice that they’re both in about the same position entering this game recalling glory and pride, heroism and national unity. Neither team is in a great position right now, but the oddsmakers and our ratings agree that the Magpies are about a five-point favourite in this game. I don’t see how Essendon wins this with Jordan Ridley out, so I’ll take Collingwood to win its 133rd game against the Bombers (compared with 104 losses and four draws).

Port Adelaide Power (4-1, 66.0) versus St Kilda Saints (2-3, 38.1), Adelaide Oval
The professionals say this is a 26.5-point spread. The ELO-Following Football ratings say it’s more like 40 points in Port’s favour. I think the Power will take this by as much as they want once they break through the defensive stand the Saints will put up to start the game. If that break comes before three-quarter-time, the win may be by 60 or 80 points.

According to our tally the oddsmakers are 30-15 this season in picking winners. Our ELO-FF ratings are 32-13 and have been closer to the actual result than the oddsmakers on 29 of the 45 possible occasions so far. In their defence, the oddsmakers’ job is not to be psychic but rather to adjust to the whims of the betters, who may be completely wrong in their thoughts on a game.

I’ve also been correct on 32 of the 45 games, although not the exact same 32 as the ratings were. We’ve disagreed four times and we’ve each been correct twice.

Further, I’ve placed a hypothetical $2 bet on each game on the day after the previous round ended for a total of $90 through five rounds (plus $18 more in Round 6). So far I’m up $9.16 on the season on these published predictions. That is not a promise of future success – no-one can guarantee future success, and if they do, something illegal or overconfident is going down. But like others who share their forecasts with a track record of success, I’ve done this for a while and have some idea of what patterns are in play.

Here’s hoping my forecasts are mostly right again this week, but you ought to remember that I don’t bet any real money on them myself. Never bet money you can’t afford to lose – treat it like any other entertainment expense. Spend the money you wager with no expectation of a return; if that amount spent gives you joy, great! Any return you get is a bonus, not a promise or a necessity. And if it doesn’t increase your enjoyment watching the footy, stop your wagering on the games altogether! Happy days to you all. 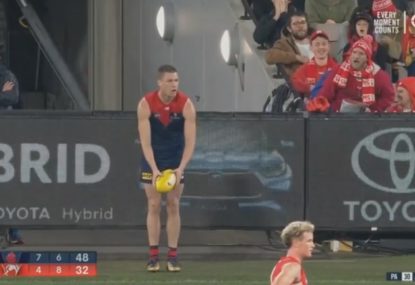 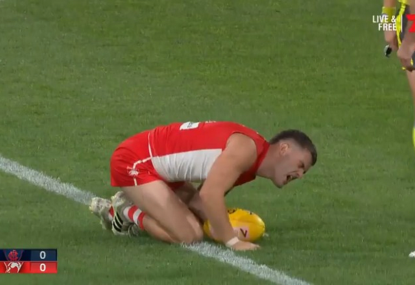