Last week was much, much more like it, so the footy gods have made sure this weekend is super tough to make up for it.

There are always a handful of gimmes – I count two this week – but most of Round 6’s other seven matches could foreseeably go one way or the other.

Both Dem Panopoulos and I were doing cartwheels down the corridor after scoring eight each – Fremantle costing me and the Swans costing Dem – while Liam Salter and the Crowd weren’t far behind on seven.

In all honesty those scores might remain as they are next week.

I always look forward to the spice that gets served up when the Giants and Bulldogs play. It’s a real old-fashioned rivalry and you genuinely get the vibe that both sets of players hate each other. Why Greater Western Sydney almost always play their genuine arch-rivals in Canberra is something I’ll never understand though.

Props to the Giants for two gutsy wins against the odds to revive their season and (temporarily) relieve pressure on Leon Cameron, but the Bulldogs look like a runaway train right now and should get up by around four goals.

This time last year we were stuck with no football, and the only thing worse than no football was watching Geelong play North Melbourne last week. Jeremy Cameron may be finally debuting, but no key forward can fix how lackadaisical the Cats have looked elsewhere on the park. The fact Patrick Dangerfield’s return didn’t make an enormous impact is worrying.

West Coast hate playing at Kardinia Park, but if they can’t get the job done over Geelong in the form they’re in, write them off for the flag.

If someone told you last year that an injury to Tom Hickey would jeopardise a team’s top-four hopes and that the team in question would be the Swans, you would’ve raised an eyebrow, but here we are. Sydney face a huge challenge to keep their spirits and form up over the next few weeks, but Hickey’s absence won’t be felt too much against a Gold Coast side with no fit ruckmen, so I’ll back them to move to 5-1.

Carlton are more of a chance against Brisbane than they’re getting credit for, especially when you consider the home side has won the last seven matches in this fixture. That said, Chris Fagan looks to have the Lions back in good gear, and they should be able to claim the four points.

Match of the round is clearly the undefeated Demons up against Richmond. As impressive as Melbourne have been and as much as I still believe they’re genuine contenders, they’ve had a good run with the fixture so far, and a shocking recent record against the Tigers means I can’t back them with any confidence. If they pull off the upset though, look out.

Fremantle should have no trouble extending North Melbourne’s miserable run in Western Australia, while the last Sunday game should see Port Adelaide pile more pain on an increasingly disappointing St Kilda side.

Hawthorn disappointed me in a big way a few weeks ago against the Dockers, but they were actually very competitive for three quarters last week and have maintained their imperious record in Launceston through thick and thin. I’ll back them to get up against Adelaide, who haven’t travelled to York Park since 2010 and are due to start easing off about now.

It’s hard to get too excited about the Anzac Day main event, but Collingwood, for all the doom and gloom, have been a bit better than their 1-4 record suggests, whereas Essendon have been very hot and cold and haven’t enjoyed much success in this fixture of late.

Port Adelaide get the nod as the Shoe-In of the Week, although I’m wary of the Saints pulling another surprise.

Round 5 was the good between the tipping difficulty of Round 4 and Round 6.

It’s like going to Maccas and getting your favourite burger with lettuce leaves as the buns, it’s hard to see the positives of the middle part when you know what’s around it.

Anyway, usually it’s easiest to pick out the most simple games to bank away a couple of tips.

North Melbourne don’t like playing in Western Australia, and Fremantle have a good record against them, so that should be enough.

Here’s a fun fact: since 2013 only three clashes between Carlton and Brisbane have been at Marvel Stadium, with the other seven being held at the Gabba. Knowing how Carlton play at Marvel though, they may as well be hosting this game in Poland. Brisbane easily.

This may surprise, but the final game I’ll lock away as an easy tip is Geelong to beat West Coast. Maybe the dynamic with Jeremy Cameron will be testing early on, but the Cats simply need to show something convincing, and the Eagles have won once in Geelong in the 21st century, which sounds cool.

I’m not sure if the perceived rivalry is still relevant given only one of the past five clashes between the Bulldogs and in-form Giants has been decided by less than eight goals, but this should be enough fun for a Friday night. Bulldogs to stay undefeated for now.

Sydney weren’t good last week and have struggled at both Metricon and against the Suns in recent times, but Gold Coast is surely too depleted to cause another upset.

The weird staple in the fixture of an Anzac Day eve clash should be good fun, with both teams playing excellent footy.

Melbourne are a legitimate team, as I have been saying since the start of the year, but this should be their first blip for 2021, particularly if the forecast continues to worsen and favour Richmond.

Adelaide haven’t played in Tasmania in 11 years, and truthfully, this might be a draw, but a tip needs to be made, so their form carries them over the line.

St Kilda aren’t a very good team, and if last year was an aberration in every sense, we can rub off their only wins at the Adelaide Oval. Port aren’t that good either, but they’ll win.

Finally, it’s the Anzac Day match where both teams are wearing predominately black and have won one game each.

The jumper clash doesn’t matter for the players, having seen the kicking skills on display so far this season, but the coin landed on heads, which means Collingwood are my tip. 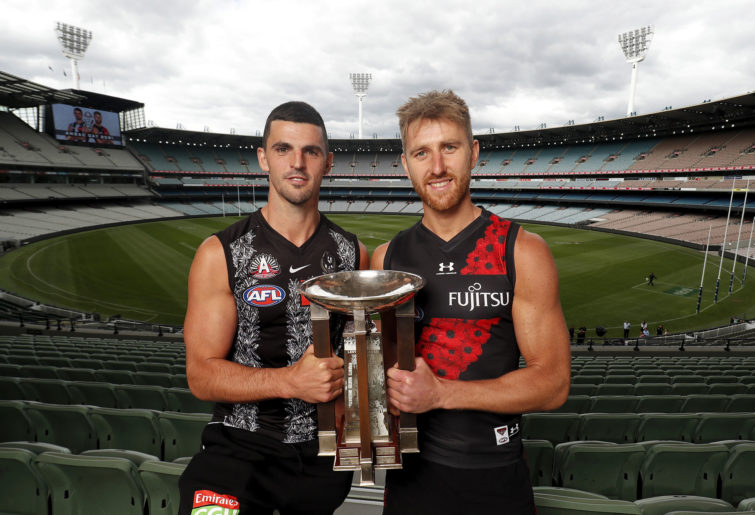 A very decent seven for me last week, with Sydney’s narrow loss and a lack of faith in my own team letting me down – I’ll never doubt you again, Freo, until I inevitably do. There’s a good suite of games this week, with the marquee clash obviously being the Anzac Day encounter between the Magpies and Bombers.

Before we get to that though, the week’s most appealing game is Melbourne versus Richmond. This match typically isn’t too exciting – history showcases a string of comfortable Tigers triumphs – but the Demons are gunning for a sixth consecutive win.

With both coming off comfortable victories, neither being able to claim any significant home ground advantage and both being similarly offensively potent, this becomes a hard pick. The Dees probable inclusions of Sam Wiedemann and Stephen May help, but Richmond looked ominous last week. It’ll be close, but I’ll back the Dees.

Back to Anzac Day proper, and it’s hard to have a lot of confidence in either team right now. With a combined two wins between them, both clubs look a fair way off the pace and have injury concerns, but given it’s Anzac Day, the quality of this game might surprise. I’m going to tip the Magpies but not confidently.

Speaking of a genuinely exciting fixture, the Giants and Bulldogs play in Canberra tomorrow night. GWS snuck a win last week, but the Doggies have been superb and I can’t see the Giants being able to stick with them. I smell a smidgen of upset potential, but I’m not brave enough to tip it.

The Eagles travel to Geelong to play what’ll be Jeremy Cameron’s Cats. That’s bound to be a great battle to watch, with Jack Darling and Josh Kennedy in fine form themselves. Injuries might play a big part in this clash – Kennedy joins Patrick Dangerfield in being under a cloud – but in what should be a good game I’ll back the Cats at home.

Hawthorn are in their home away from home in Launceston, a location where they have a superb 49-14 record, against the Crows. Neither would be particularly happy with their efforts last week, though Adelaide would be especially peeved with their upset loss against Freo.

Adelaide’s the better team this year, and a win here would make just their second win at this ground. but that Tassie fixturing makes me nervous. I like to take a risk or two a week in this column though, so Adelaide it is.

The four easiest results to tip this week are Fremantle comfortably defeating North at home, Port doing the same to a weakened and dispirited Saints outfit, Brisbane beating the Blues and the Swans – sans Buddy Franklin, who’s out for a month – registering a win over the Gold Coast in Queensland. If any of these four results don’t eventuate, you’ll know it’s been a weird weekend.