Can Carlton claim a must-win against the Lions?

Carlton will take on Brisbane in a must-win game at Marvel Stadium on Saturday afternoon.

The Blues enter this clash coming off a disappointing 28-point loss to Port Adelaide, while the Lions re-found some form last week, taking care of Essendon in a 57-point victory.

As mentioned in an article I wrote earlier this week, I suggested that David Teague swing the axe and make some tough calls ahead of the Brisbane game. That he has, as Carlton will welcome back David Cunningham and Liam Stocker into the side for their first games of 2021.

The duo starred for Carlton’s VFL side last weekend. Stocker collected 38 disposals, while Cunningham recorded 28 disposals and a goal in his return from concussion.

Out of the Carlton side go Matthew Kennedy and Tom Williamson, both omitted.

In a disappointing show against Port Adelaide last week, these were the standout players for Carlton: Sam Walsh, with 29 disposals, 12 kicks, 17 handballs and a goal, Zac Williams, with 22 disposals, 13 kicks and nine handballs, and Sam Docherty, with 25 disposals, 18 kicks and eight marks.

However, there were some underperforming players who must stand up this weekend if Carlton are to have a chance.

Specifically, Harry McKay only had five disposals for the night and kicked 1.2. In his return game, Mitch McGovern amassed 13 disposals but only 1.1, and Patrick Cripps’ 27-disposal game also included a missed set shot in the first quarter from 15 metres out directly in front.

Carlton must be aware of these players’ form, and think ahead to stopping these players having a profound impact or it could get very ugly on Saturday afternoon.

“We’ve probably got a bit away from it: I saw on the weekend and I think our fans got frustrated and our players got frustrated because we weren’t executing to the level we have done in the past,” coach David Teague said.

“We just have to get back to doing the basics really well and playing a brand of footy that we know is us.”

Brisbane have had the wood over Carlton over the last five years, winning four of the last five clashes. Carlton’s last victory over the Lions came in a stunning upset in 2019 in Round 12.

The Blues trailed at one stage 40-3, before a Patrick Cripps-inspired Blues revival caused quite possibly the biggest upset of 2019. Cripps was on fire that day, gathering 38 disposals, 18 kicks, 20 handballs and four goals.

He will need to be in similar form on Saturday if Carlton are to rescue their 2021 season. It is an opportunity the Blues are lucky to have playing the Lions at home, and they simply must take this opportunity.

Hopefully by Teague making some tough calls and bringing in some youngsters who can produce quality and moving out some players that clearly were not performing up to standard, it will pay dividends.

“We haven’t been good enough in the key moments but that’s part of our growth,” he said.

“We’ve addressed it, but until we go out there and do it, people are going to continue to question us.

“It’s up to us to keep working, the coaches and players are working very closely. I think we’re very clear on what we need to improve on and how we’re going to do it.”

Carlton will have their passionate supporters behind them at Marvel Stadium. They will hope Carlton can make the most of their home-ground advantage and bounce back from the disappointing effort against Port Adelaide. 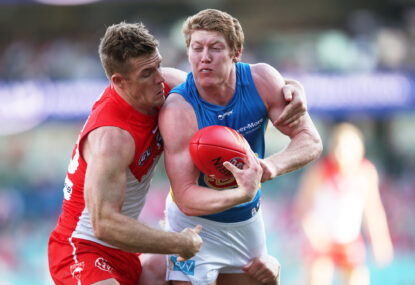