When the Association of Australian Football Clubs released its late-January, 55-page progress report in regards to the implementation of a national second division in Australian football, the intent was clear.

Chairman Nick Galatas has remained consistent in his view that the proposed 12-team league, designed to sit snuggly below the A-League competition, would benefit fans, players, media and the broader game of football as a whole.

The update encouraged an acceleration of the process, suggesting a late 2022 or early 2023 start was well within the realms of possibility.

The AAFC believe the league is well overdue, financially sustainable and destined to provide Australian football with the pathway benefits so oft cited as absent by critics of the domestic game.

Sadly, fans of two of New South Wales’ most influential and powerful National Premier League clubs, both no doubt keen to become inaugural members of the first ever national second division, became involved an ugly and violent brawl after their teams fought out a tough 0-0 draw in the southern suburbs of Sydney on Sunday afternoon.

Rockdale Ilinden FC and Sydney United 58 FC played out the scoreless draw in a reportedly heated atmosphere; a match that presented the opportunity for United to join Rockdale at the top of the NPL 1 ladder after nine rounds.

There were tensions on the pitch between players, numerous altercations which the referee struggled to simmer and in the end, the fans in attendance became far too emotionally invested in the battle and took matters into their own hands outside the stadium.

The post-match became headline news when flares, tables and other obviously readily available objects were used as weapons and hurled between the two sets of supporters. The footage is ugly, prehistoric and embarrassing for all involved.

The reported image of a machete is most concerning, particularly if the presence of such a weapon is confirmed by police.

Severe lacerations led to at least two fans requiring admittance to hospital, the constabulary made a brisk arrest and are expected to make more in the coming hours.

While the buffoons involved may have received their rather pathetic thrills for the afternoon, the fracas was nothing more than a throwback to the dark days when football fans around the globe appeared more intent on making the contest about themselves rather than the teams on the pitch.

It took stern measures, expulsion from leagues and a general condemnation of the violent conduct undertaken by some supporter groups to alter expectations around football support.

Around the world most countries have embraced the change and the global game is far the better for it, despite the odd indiscretion where certain groups have put their Neanderthal ways on display.

Providing a safe environment for all football fans lies at the core of the efforts made to eliminate violence, threatening behaviour and language, as well as intimidation at football matches.

With such hope and positivity pervading the Australian domestic scene and successful NPL clubs jockeying for position in the increasingly real national second division, the fans of Rockdale and United have done themselves no favours when it comes to their potential inclusion. 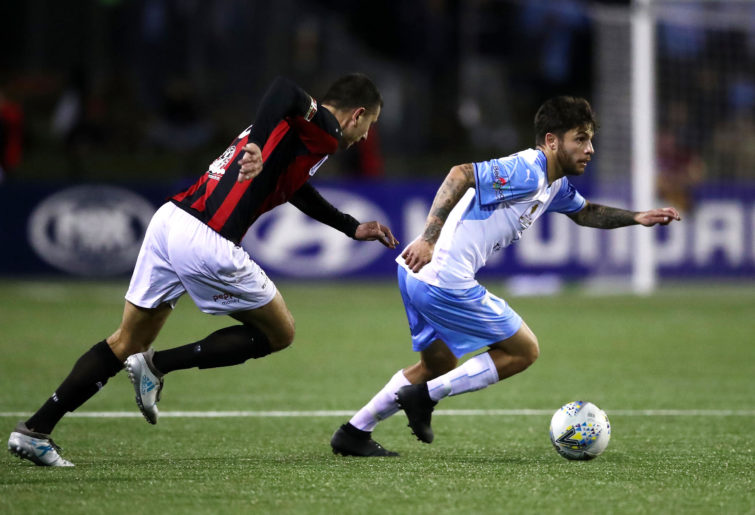 No second tier competition can risk the participation of teams whose fans show a disregard for the clear expectations around positive and acceptable support for their clubs. In order for such a competition to succeed, the financial support of sponsors will be vital; support that is dependant on the quality and respectability of the product on display.

Events such as those seen on Sunday afternoon erode that respectability and provide fodder for long standing “soccer critics” to sink the slipper once again and inferentially imply that the game has not really changed at all; suggesting the game is still supported and attended by thugs and bullies more interested in a fight than the result.

For those critics, images of the wild confrontation between two of the NSW NPL heavyweights is the lowest of low hanging fruit, yet perception forms a significant part of reality and for that, both clubs should be struck off the list when it comes to those being short listed as potential members of Australia’s first national second division.

Some will suggest that such an action would be harsh. However, at a time when the game stands at the frontier of a new era where the realities of promotion/relegation and a fully functioning competition designed to link seamlessly with the A-League are so close, both clubs should have a line struck through them thanks to the image problem they have created.

A new second tier needs to stand for something real and reputable. What Rockdale Ilinden and Sydney United fans produced on Sunday is exactly what it should not stand for.

There are plenty of other NPL clubs worthy of admission to the new league and I’d suggest we should be supporting their bids instead.