He found 17 of them dating back to the best team of my lifetime, the 2000 Essendon Bombers, although originally he’d missed the one that’s easy to miss: Geelong 2011, which had a bye early on in a 17-team season and thus were only 5-0 in Round 6.

In fact, those Cats won 13 in a row before losing to Essendon by just four points, en route to a 19-3 season in which they pounded Collingwood by 38 in the grand final for their third title in five years.

So, I took his excellent historical piece as a friendly clarion towards me in my particular area of footy expertise and research. Let’s take a deeper examination of what happens when a team goes 6-0 in top-level footy:

The AFL evolved out of the original VFL, changing its name for the 1990 season; its records are considered continuous dating back to the original eight in 1897.

That’s not the case because some teams are simply better than others, so teams are more likely to spread out towards the top and bottom of the ladder than if by random chance.

The actual number is 30, not counting the 1971 Collingwood team that went 6-0-1 before losing to St Kilda in Round 8. As we said, some teams are simply better than others.

The Western Bulldogs and the Melbourne Demons are the 31st and 32nd teams since 1970 to start the season winning six on the trot.

Beveridge did a great job chronicling the fates of the 17 most recent of these teams, and he mentioned that four of them had made the leap from “fast start” to “confetti in late September”: that Essendon 2000 team, the 2008 Hawthorn club, and Geelong’s 2009 and 2011 clubs.

But the club had pulled this stunt before, in 1979, when they also started 6-0, lost to another unbeaten in the Kangaroos in R7, then went on to an 18-2 record before losing a “dead rubber” after clinching the top seed to finish 19-3.

They defeated arch-rival Collingwood by five, 82-77, to be the sixth of our 6-0 teams to complete the journey with a trophy presentation at the MCG.

Then there’s the reason I went back specifically to 1970: the Magpies team from that season.

The Bulldogs are having a great season. (Photo by Daniel Pockett/Getty Images)

In 1970, Collingwood started the season 8-0. They lost three mid-year games by single digits (alright, the Tigers won by 12), but led the ladder wire to wire, defeating Carlton twice – the second time by the outlandish score of 101 to 24.

They beat them again in a competitive semi-final by ten and faced them again in front of what is still the largest official crowd in league history: 121,696 people packed into the MCG.

They kept the Blues without a goal in the first quarter and led by 44 points at halftime. But in the second half, Carlton outscored the Pies 13 goals to four and 82 points to 28 to stage the greatest comeback in finals history and one of the top ten in any league game ever, winning the 1970 title by ten, 111-101.

For more detail, far better narratives are available than this one – and it’s worth your time to find one if you’re unfamiliar.

So that’s 14 of the 30. One of the others was Essendon in 2013, which dropped to seventh at 14-8 and then was dropped from finals as partial punishment for its medical scandal, about which far too many details are also available elsewhere if you’re unfamiliar.

The final seven all reached the finals, but didn’t make any noise there.

We’ve talked about the destination, but let’s consider the journey, which is where our Demons and Doggies are right now. Since 1970, there are now 32 out of 773 seasons that have started 6-0.

What about the 30 previous candidates?

This includes 1970 Collingwood (lost in rounds nine, 11, and 13 but recovered to finish 19-3, only to face Carlton in that infamous GF); 1978 North Melbourne (started 8-0, finished 16-6); 2001 Hawthorn (lost to defending champion Essendon in R9; started a freefall that included their sixth loss, embarrassingly, to 0-17 Fremantle by 16 points; finished 13-9 and managed two wins before losing in the prelim final); 2005 West Coast (lost to 1-7 Collingwood, then reached 15-1, then lost four of six, including a R22 game to Adelaide for the minor premiership; beat Sydney by four in the QF and then lost to them by four in one of the greatest GF’s of all time); and 2008 Geelong (more on them later, but they lost to 4-4 Collingwood by 86 for their only loss of the home-and-away season).

Christian Petracca and the Demons are having a great year. (Photo by Dylan Burns/AFL Photos via Getty Images)

Three of the last nine teams still unbeaten at 9-0 lost in game number ten: 2008 Hawthorn (beaten by the 7-1-1 Bulldogs, finished 17-5 but won three straight to take the title); 2015 Fremantle (made it to 16-2 before losing three of the last four and then two of three finals to fall short of the title game); and 2016 North Melbourne (after starting 10-1, lost nine of the last 11 – eight to finalists and one to 9th place Port – to squeak into finals in eighth place and then lose in the elimination final).

Brisbane waxed them by 80 in the qualifier, and while they made it past Sydney this time, Port edged them in a thriller, 94-88, to deny them a rare grand final appearance.

In 1991, West Coast had their best season, on the surface: they went 12-0, lost two games over the next nine (by three points each) to clinch the minor premiership, and gave up the dead rubber 22nd game to finish 19-3. But then Hawthorn shocked them at Subiaco, pulling away in the fourth to win by 23.

They managed a rematch in the final (at Waverly Park, because of the MCG reconstruction) but lost by 53 this time, 139-86.

Twice Geelong has made it to 13-0 before losing game 14. In 2011, they stopped Collingwood’s unbeaten season in Round 7, lost close games in R15 and 16 to fall behind the Pies, and finished 19-3 in second place, only to defeat them a third time in the grand final.

But two years before that, their winning streak was ended by St Kilda in R14 – more in a moment – which possibly cost them in R15 as well, losing to Brisbane by 43. But in the end, they got their revenge on the Saints, defeating them in the grand final, 80-68.

See, that St Kilda team that ended the Geelong winning streak was *also* undefeated – the only time in league history that two teams with double-digit undefeated starts to the season have met.

The Demons and Bulldogs would be the second if they’re both 10-0 in Round 11 next month.

The Saints not only won that game, but they made it to 19-0 before losing in R20 (they had virtually clinched the MP on percentage already) by two and to the Kangaroos by five in R21 to finish 20-2.

Alas, you know the tragic ending for beleaguered Saints fans: Geelong upset them in the grand final, 80-68.

The most successful team of all was the 2000 Essendon Bombers, which held the only 20-0 record in history. In R21, hosting a dead rubber with a five-game lead, they rested James Hird and Paul Barnard, while Damien Hardwick got just five disposals in before his game was over. 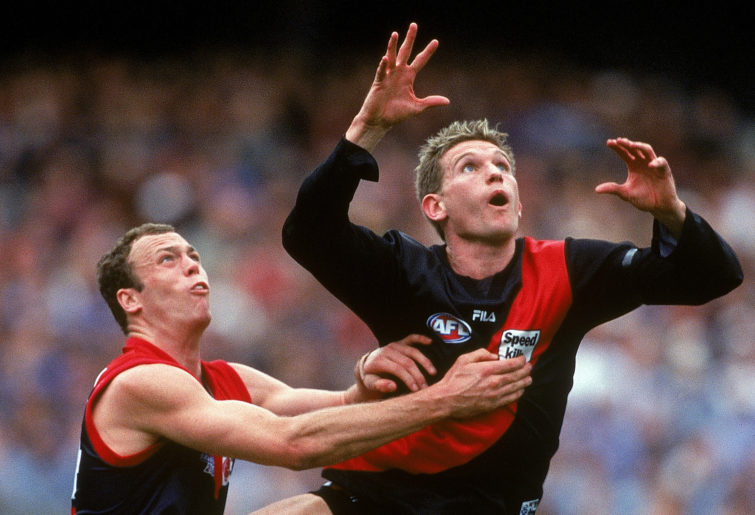 Nevertheless, they led the Bulldogs at 3Q time before capitulating, 92-81. They put away Collingwood by 19 to finish the season 21-1, the best record for a champion in history. The finals were even more convincing: they won thrice by scores of 198-73, 125-80 (a nail-biter), and 135-75 to complete the virtually perfect season, capping off the best start in league history.

Unless Melbourne or the Bulldogs win their next fifteen…

The 20 to 1 list includes a number of common nicknames that turned up regularly. Rather than lump them all together, I have highlighted each player who earned the name over the last 125 years. 20. ‘Pop’ Vine is one of just four players in VFL/AFL history to play in a premiership on debut, along […] 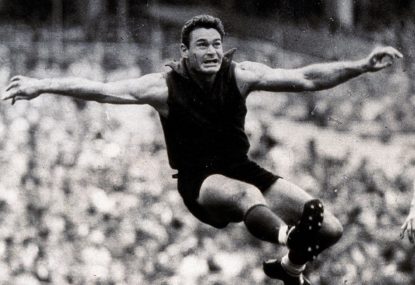 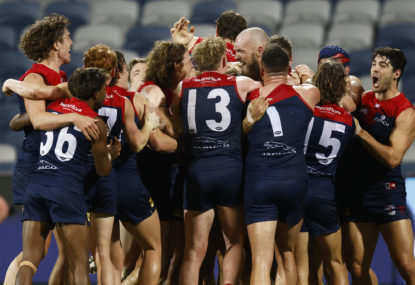