Are the Brumbies about to lose their mantle as Australia’s No.1 team? Part 1

Digesting the semi final over the past weekend has only re-affirmed some thoughts that I’ve had for some time now about the Brumbies’ game.

Their win against the Force places the two best teams in the country against each other for the thid time in 2021. The previous games have been pulsating!

The first: almost 80 points scored and while there was some great attack, it’s hard to know just how good it was, because across all the Australian teams, defence has been poor (the Force this past weekend exempt).

More on that in later analysis.

The second game – more of a grind, but nevertheless just as intriguing for its sub-plots.

Hunter Paisami’s late withdrawal threw the Reds’ attacking rhythm. Don’t underestimate his importance to the Reds – there’s a reason the Force, and Tevita Kuridrani in particular, went after him in their last game.

The Reds have very good front foot and quick ball decision-makers and Paisami sets them up for that. If he stays on the field against the Force, it may well have been a different result and Dave Wessels may still be in a job!

During the first half of the last game, the Brumbies went after the Reds’ forward ball runners. Throwing sometimes three players into the tackle, they won the advantage line and starved the Reds of the quick ball that their backs thrive off.

James O’Connor particularly struggled to find space during this period reverting to some old habits, specifically just standing and passing – usually with a step – slowing delivery further to outside flat-footed runners! 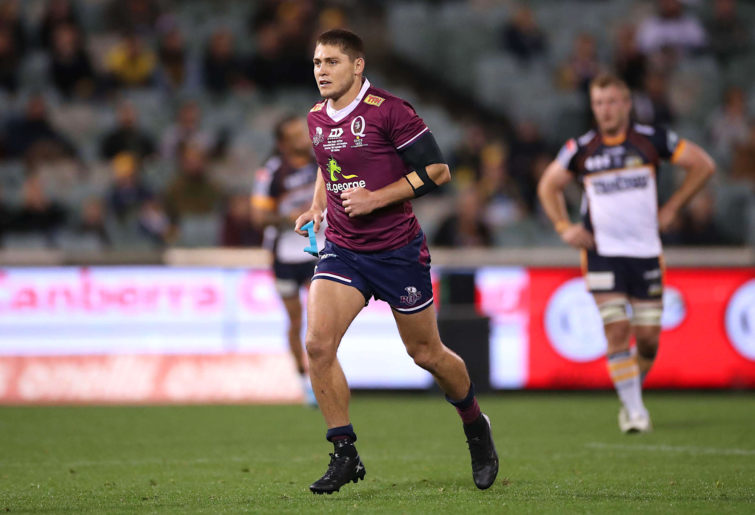 It’s a common habit that fly halves fall into when they’re exposed to defensive speeds that they’re not used to.

Unfortunately, it also plays into line speed based defence for which the Brumbies were able to generate through tackle contest and defensive gain line dominance.

This is a bi-product of a philosophical flaw with the predominant 15-on-15 training that sides utilise these days.

I’m not suggesting that teams shouldn’t do 15-on-15 training, by any stretch.

It is a fundamental component. But well over 80 per cent, and sometimes 90 per cent of on-field preparation is just that.

Thus, forcing both context and necessity for technical proficiency and tactical decision-making while under significant physiological (conditioning) and time stress. That’s a long way of saying elements of training need to be harder than the game to get effective transfer.

O’Connor was also exposed in this area during the last Force game as well.

I wonder whether Jim Mackay, who is a smart operator, may have adapted their training over the past few weeks to address this, particularly without Paisami – who, as I mentioned above, creates space for O’Connor et al. through his ability to get over the advantage line and generate quick ball. 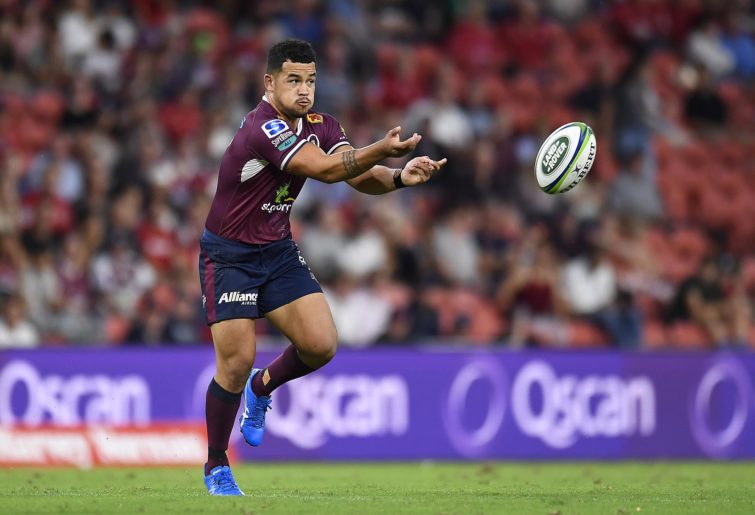 Despite not playing flyhalf for the large part of his career, O’Connor is no run-of-the-mill player. The way he and Jim Mackay altered the last Brumbies game tactically in the second half was master stroke.

It wasn’t just kicking, as many have reported, either.

The first time the Reds were in possession in the second half, their forward ball receivers – who predominantly carried in the first half – began throwing short passes to other forward runners on the inside and outside.

It looked clunky and didn’t penetrate – but it was implemented to stop the Brumbies inside and outside defenders (from the ball carrier) just zeroing in and double or triple tackling the ball carrier.

This, combined with good variety including excellent short and long kicking to space, took the speed out of the Brumbies’ line, sting out of their contact and resulted in more one-on-one contests, leading to quicker ball, advantage line and dragged the Reds back into and eventually towards winning the game.

This leads to the first point of comparative analysis:

Leadership
The Brumbies have well established leadership and a very good Captain in Alan Alaalatoa. 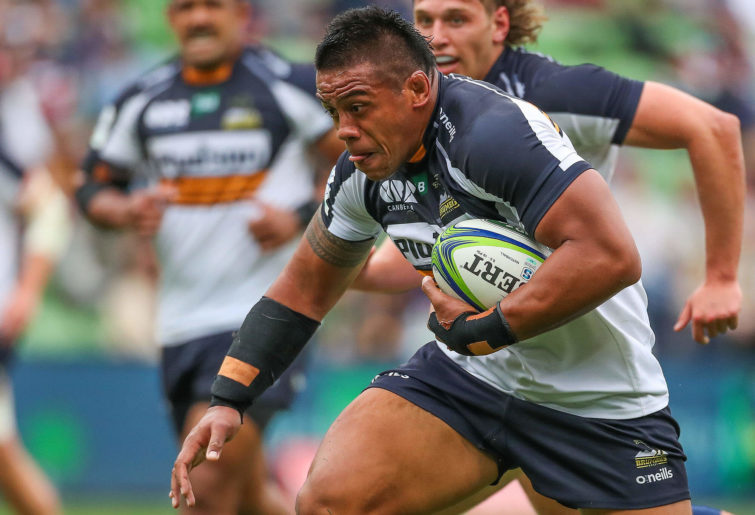 But deeper than that, they have an on-field leadership process born out of research of a former employee.

It’s based around maximising the ‘time off’ components of the game. Collectively re-centering – then refocusing and clarifying – what is to be done next.

The effectiveness of the process is best explained using what went down in folklore during the 1991 Rugby World Cup quarter-final as an example.

With only a few minutes left on the clock, Ireland scored to take the lead against (eventual champions) Australia.

With their World Cup potentially being over, there was obviously significant stress behind the try-line. Compounding this, regular Captain Nick Farr-Jones was off the field – injured.

Stand in captain Michael Lynagh, whose father was the Australian cricket team’s psychologist during the late ’80s to early ’90s, took control, brought everybody in and (I’m paraphrasing) said…

“I’m going to kick off deep to here… Edgo, you chase and pressure their relieving kick.

“From the line-out, we’ll then get the ball to David Campese on the switch off Timmy (they’d already scored off this move). If it gets shut down, we’ve just got to keep the maul going forward so we get the scrum feed (old laws).

“From the scrum, this is the move I’m going to call – Campo, when you get the ball, I’ll be following in support.”

History, states that everything he said would happen, did. Campese was pulled down a metre from the line but he managed to offload out of the tackle.

Lynagh in support picked the ball up off his bootlaces and barged over in the corner for the match winning try.

The stadium went silent – the Irish hearts ripped out!

In one of the best pieces of commentary in World Cup history – Gordon Bray instructed his co-commentators to also remain silent, so everybody could take the moment in!

The Brumbies have worked on their on-field communication process now for a number of years. It’s automatic and it’s been at the heart of some of their most famous ‘backs to the wall’ victories.

It will mean that they’ll be there competing with clarity right through to the final siren – doing whatever it takes to win the game. 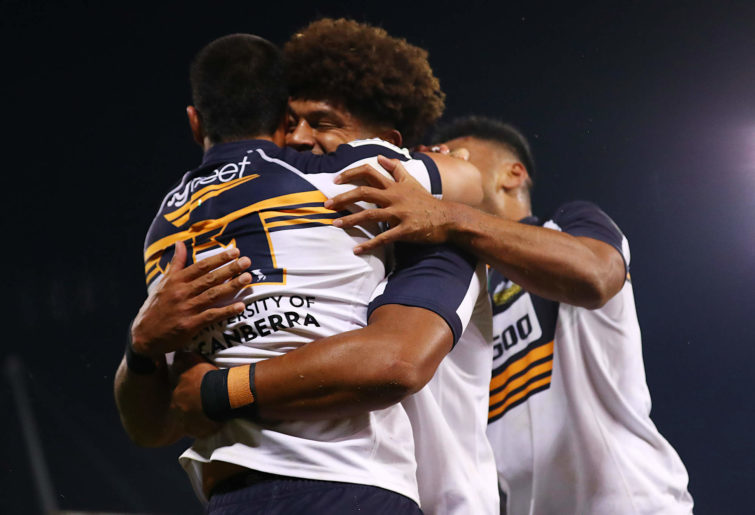 Tom Wright of the Brumbies celebrates scoring a try with teammates. (Photo by Mark Metcalfe/Getty Images)

The Reds
In the post-match interview after the last Reds-Brumbies game, James O’Connor was asked what his decision-making process was.

His reply was words to the effect of: “It’s more feel than process.

“It’s what I feel is right for the time!”

Captaincy has brought out the best in O’Connor.

But more than that, he knows intuitively when to engage others in the process.

After the Reds beat the Brumbies in Canberra, he was asked about the decision for Paisami to kick in behind the Brumbies line for the match-winning try. His reply was, “Paisami called it, and we back our players when they call for a specific play.”

I don’t know the machinations of the inner sanctum of either team, but from the outside looking in and joining some very ‘loose’ dots, the Brumbies appear more systemised in their on-field leadership.

Centred around game plan clarity, managing focus and emotions – but such that if their captain is injured, other identified players can step in and run the process. 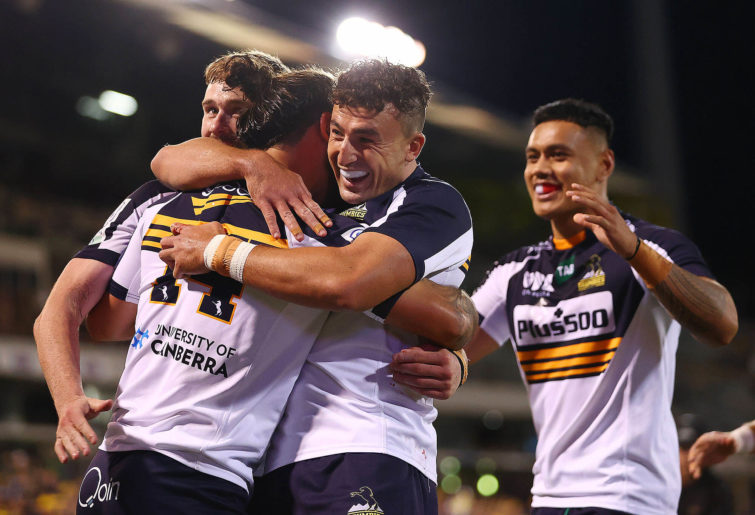 On the flip side and while I’m sure the Reds do have some systems in terms of the above, it’s more democratised in terms of incorporating what players are seeing as the game unfolds.

Where the Brumbies may have an advantage is in clear ‘protocol’ to refer back to in managing focus, emotions and getting back to the prepared or adjusted game plan. The Reds may have the advantage in collectively recognising and adjusting to opportunities – on the run.

Their game plan having some more flexibility in the unstructured components to collectively communicate space, decisions and adjust.

These are just my observations – this may not necessarily be the case.

Which comes to the next point, which I’ll try to articulate with another story.

In 2002, the Canberra Vikings (playing in the Brisbane Hospitals Cup), then coached by Laurie Fisher, had a number of very good backs. But a number of players were slated in the same position.

He had Brumbies contracted players in every position but 12 and had two very good scrum halves – one contracted, one not.

His instinct was to pick two players out of position to cover the fact that they didn’t have an out-and-out 12.

One of the players he was going to play out of position was regular flyhalf, captain and Brumbies starting winger, Mark Bartholemuez.

He sat down with Barty and had the difficult conversation. Barty wasn’t happy and didn’t agree with the decision but being the wonderful person he is, he disagreed and committed!

The player that Barty made way for in the flyhalf position was backup scrumhalf, 19-year-old Matt Giteau.

History shows that with Giteau at flyhalf and Bartholemuez at 12, the Canberra Vikings that year set attacking point scoring records on the way to winning the Brisbane Premier Rugby competition.

The form of both players was rewarded with selection on the Wallaby end of year tour to the UK, culminating with both making their Test debuts.

How does this relate to the Reds?

The unfortunate injury to Liam Wright at the start of the year thrust the unlikely James O’Connor into the captaincy.

Similarly to an enforced change of position to Matt Giteau and Mark Bartholemuez in 2002, what a revelation he has been!

With added responsibility, O’Connor’s game goes to another level and he brings others with him. The Brumbies’ leadership is a practiced and embedded system, that will ensure they will be there right to the end.

But this year, O’Connor’s leadership has developed homogeneously and is interdependently linked with the team and their performance.

There are weaknesses in their game as there is with the Brumbies game, which I will articulate in subsequent articles.

But the Reds are more adaptive than the Brumbies in the unstructured game elements where on-field ‘feel’, and decision-making is crucial.

I don’t see it happening, but with O’Connor captain, the leadership advantage that the Brumbies have is blunted.

Further weight to this is that Wright should have been penalised in the last game at Suncorp for what was a cynical act at the death.

Wright is young, and like us all, has a lot to learn.

But the captain needs to be the person who shows the team that there is unwavering belief. That act alone showed the team that he didn’t believe they could legally hold the Brumbies out.

That specific breakdown also pointed to clear weaknesses in the Brumbies game – that have been there for a few years, but have infrequently been targeted and exposed until the Force game last weekend.

The Reds’ defence, tackling and tackle contest will go a long way to winning them the game.

Wright needs to lead this and allow O’Connor to make and facilitate the global game decision-making. Otherwise, the Brumbies have an edge in this area.

My next article will compare kicking, field position and set pieces, while the final articles will look at attack and defence.