After all the dust had settled on the Super Rugby AU preliminary final, the story turned out as expected. The Brumbies advanced to their third showdown of the season against the Queensland Reds, and the Force went home to lick their wounds.

The Force’s head coach, Tim Sampson, was honest enough to admit disappointment after the event.

“There’s genuine disappointment there because probably when we reflect on that it was one that we let slip because we didn’t fire too many shots,” he said.

“It’s going to sting, no doubt. I think the guys were pretty flat.

“The disappointment will be there for a few days, no doubt. It will probably hit over the next couple of days.”

Firing enough shots on offence has been the Force’s main problem throughout the 2021 regular season. They averaged 18.5 points, and fewer than two tries per game, and those stats do not tend to win you much silverware.

Holding the Brumbies to fewer than 20 points on their home patch was always going to be a big ask, even though Sampson had correctly identified the major items on his team’s menu before the start of the game.

“It’s important to get a good start against the Brumbies; to get in that arm wrestle and not fall behind on the scoreboard early,” the coach said.

“It’s a big focus for us and we’re going to have to be bloody good at it.

“Last year and the start of this competition we hadn’t beaten any team so we’re ticking boxes and there’s another box to be ticked, and that’s beating the Brumbies at home.

“We’re riding a wave at the moment and the Brumbies in the last couple of games have been a bit clunky.

“We’ve got to maintain possession for long periods; they infringe a lot in all areas of the game so we’ve got to hold on to the ball as much as possible and play in good areas of the field.”

Get into the arm wrestle and don’t fall behind on the scoreboard early – tick. The Force were still 3-0 ahead in the 36th minute of the game.

The second part of the equation – holding on to the ball and maintaining possession for long periods – did not go so smoothly.

The raw stats show that the men from Canberra enjoyed the lion’s share of the ball (62 per cent), and even more of the territory (71 per cent). That the Force were able to come out on the positive side of the penalty count (12-9) in those circumstances was a great tribute to their defensive discipline, even if they did lose their right wing, Toni Pulu, to a red card for a 20-minute window just before halftime.

In the process, they were good enough to demonstrate why the Brumbies can look clunky when their key strengths are neutralised. Led by the evergreen Jeremy Thrush, the Force started strongly on the Brumbies’ lineout ball, getting first touch at two of their early throws and forcing a handling error at a third.

They successfully stymied the home side’s attempts to drive the ball from their favourite set-piece.

When the Brumbies try to roll the maul around the openside corner with their favourite ‘driver’ Allan Alaalatoa in the van, they are comprehensively stopped.

This is where the Brumbies’ highly methodical approach can become clunky and predictable. If they don’t get momentum at forward, their attempts to move the ball wide lack finesse.

Andy Muirhead heaves a long pass out in the direction of Tom Wright on the left wing, and Wright receives the ball and four Force defenders together. 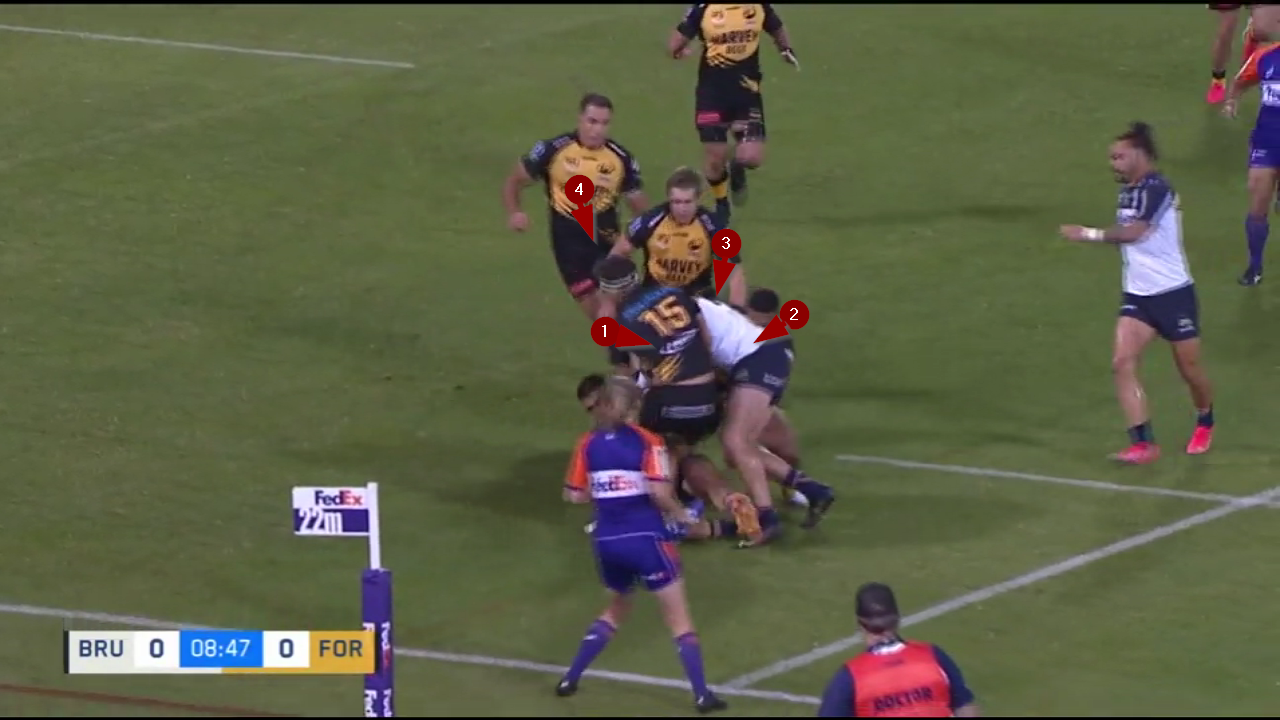 Both the Force centres plus Pulu and fullback Jake Strachan commit to the point of contact, against two Brumbies – Wright (on the ground) and Tom Banks. All attacking impetus is lost and the home side coughed up the ball a couple of phases later.

The pressure the Force were able to exert on the Brumbies’ wide rucks was a consistent theme. On plays where the Ponies moved the ball from midfield into either of the 15-metre channels with two or more passes, their ruck retention rate was only 17 out of 27, or 64 per cent.

That number includes severe delays at the ruck, where the Brumbies either committed a handling error, or were forced to kick the ball away immediately afterwards.

The man especially under the microscope was Tom Wright on the left wing, and the tone was set right from the start of the match.

In this case, Noah Lolesio takes the ball into the left 15-metre zone by hand, and Wright should be the main cleanout support when he goes to ground. But he enters the contest far too high, and there is no prospect of him being able to remove his opposite number Toni Pulu. 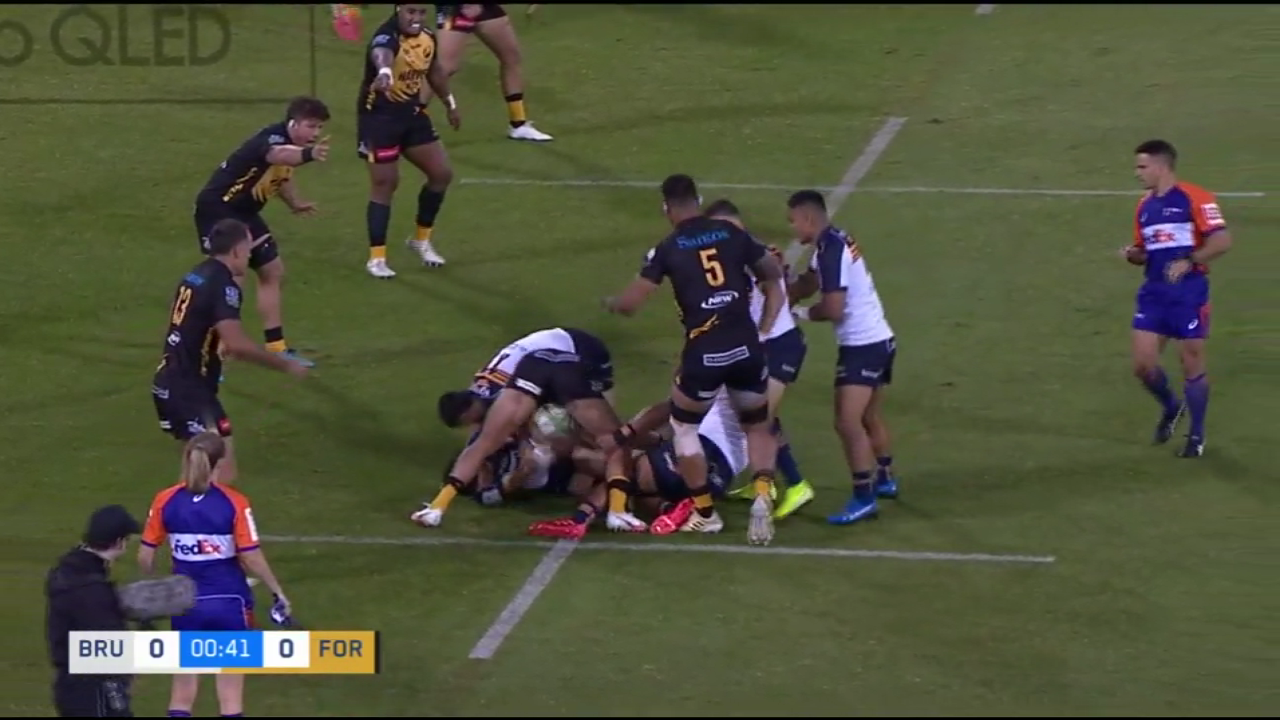 By the end of the ruck, it is pretty clear Wright is not quite sure what he should be doing, and he leaves the job to his halfback Nic White instead.

Tom Wright is in a similar position to Marika Koroibete when he first transferred from rugby league. He clearly has the running and handling skills needed to succeed in elite level rugby, but he has yet to learn the nuances of the game in contact. In league, nobody can take the ball off you in the tackle.

Wright takes the ball into contact, and ex-All Black centre Richard Kahui promptly strips it away from him. Scrum to the Force.

The Force targeted all aspects of Tom Wright’s contact work with great success. As in the first example, his cleanout attempts tend to come from high-to-low and struggle to remove the threat.

His ball placements after being tackled on the deck tend to be too slow and too short. In the following example, the ball is still directly beneath his body as he tries to get up, after the Force counter-ruck has already passed over the top of him.

The malaise in a particular area of the field tends to spread from player to player, and from phase to phase:

In the first instance, Tom Wright is not directly involved, but the pressure on ruck set by Andy Muirhead squeezes a handling error out of the following second line play between Darcy Swain and Lolesio. In the second, Lolesio ships the ball on to Muirhead, who is first swamped, then stripped by Kahui and Strachan in contact.

The one proviso was that the Force remained in good defensive shape on Wright’s side of the field. When Wright is given a sniff of an opportunity in space, his level of performance shoots up from ordinary to stellar.

As ex-Wallaby coach Michael Cheika pointed out in the Stan Sport commentary, Kyle Godwin’s action – biting in on the second passer (Irae Simone) – exposes Pulu and Strachan to the kind of contest where Tom Wright ascends rapidly to world-class. 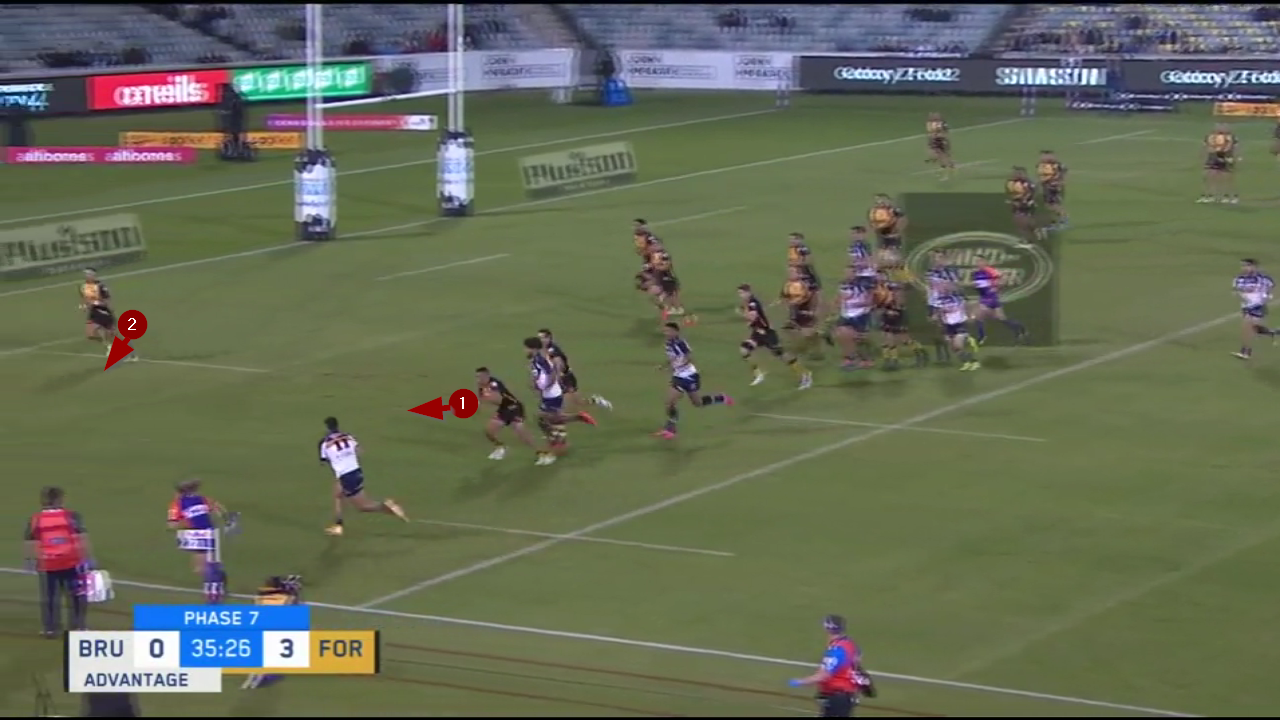 His instincts as a finisher are second to none, and he proved it again in the second period, with another try which was rubbed out on review for the sliver of a foot in touch.

With Pulu off the field on his card and space in behind Strachan, Tom Wright again has the luxury of operating in space. 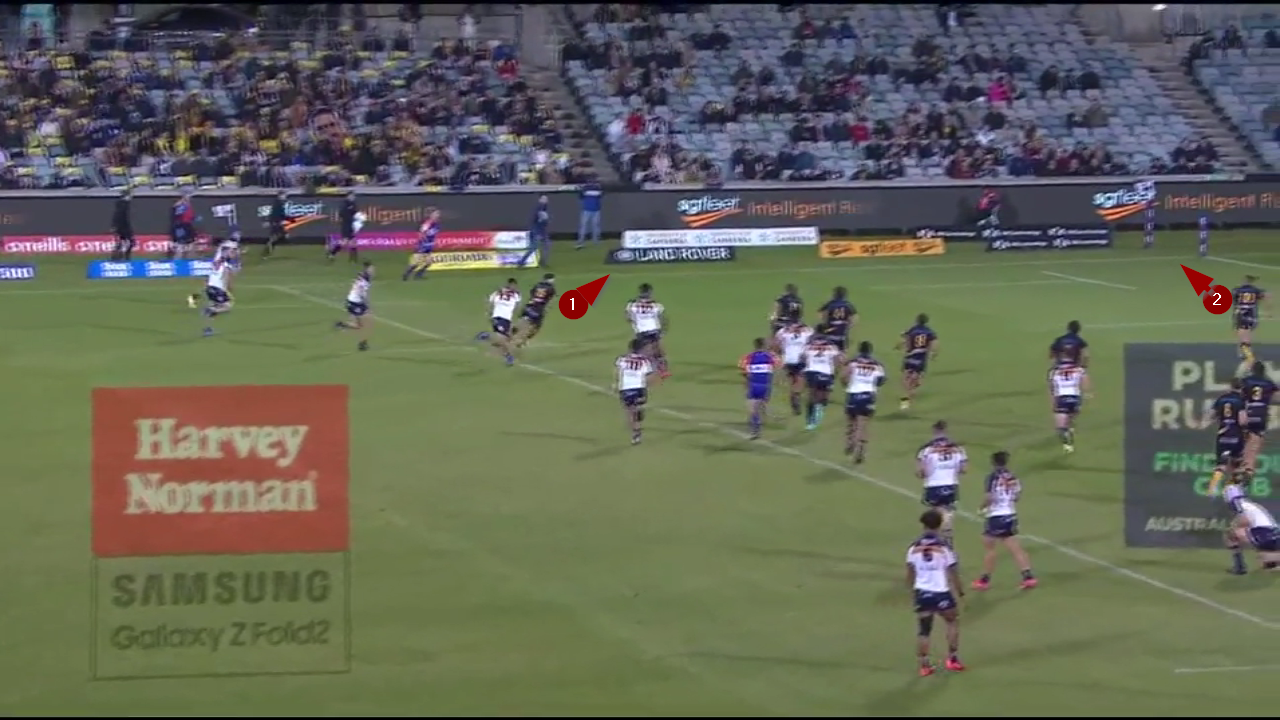 One-handed pick-up and slick slide in at the corner? No problem.

The Force won many of the small battles they needed to win to ‘stay in the arm-wrestle’ with the Brumbies, but ultimately they lacked the ability to maintain possession for long enough, or the scoring power to exploit what little they had.

There is little doubt however, that they will have taught the Brumbies as many lessons about their vulnerabilities as they taught the Reds in the previous round. They showed that when the Brumbies’ lineout platform is disrupted, their attempts to move ball wide can be clunky and predictable.

When the ball enters the wide channels off a forward screen or via a long pass, it can be attacked at the tackle, and this is particularly true when the ball goes right-to-left and anywhere near Tom Wright. For all of his world-class handling, running and finishing skills, Wright is still very, very average in contact situations. League does not teach you that.

The Force have provided a true litmus test for the two best provincial sides in Australia, and they have bowed out at the right moment – not with a whimper, but with a strategic bang.

Tim Sampson’s preparation will have provided a lot of the bullets for both finalists to fire over the past two weeks – the question is: who will be quickest on the draw, in the gunfight at the Suncorp Corral next Saturday?