In a see-sawing contest, the Titans were able to break their three-game losing streak. However, their defensive problems over the last few rounds were still very much on display.

After a raft of early Tigers errors, the Titans opened the scoring inside the first ten minutes. Tanah Boyd grubbered into the in-goal and Philip Sami was the last man standing to score.

The Titans were in again minutes later with some of the best football. From the kickoff, the Titans shifted left and Alex Brimson went through a huge gap. He beat Adam Doueihi and found Tyrone Peachey, who held off Luke Brooks on a 50m run to the try line.

A Jarrod Wallace offload continued the early onslaught, which ended with David Fifita running into space on the left edge. He drew the defence and Brian Kelly was in for the Titans’ third try in five minutes.

Jamal Fogarty was hitting his conversions sweetly and the Titans lead 18-0 inside the first 15 minutes.

Over the past fortnight, the Titans have given up big leads and the warning signs were soon evident again.

A David Fifita forward pass gave the Tigers a few repeat sets on the Titans line. Twenty minutes in, Doueihi held up the ball nicely for Joey Leilua and he was too strong for the Gold Coast defence.

Momentum had shifted to the Tigers, and they were in again just seven minutes later. Beau Fermor gave Jake Simpkin a little too much room at dummy half and he took full advantage. The deficit was back to six.

There were a couple of moments tonight when the Titans scored against the run of play.

With ten minutes to go in the first half, we got the first moment. A Jamal Fogarty bomb was taken brilliantly by Anthony Don. He somehow got the pass away to Fermor and he scored in the corner, setting up a 24-12 halftime lead.

The Tigers started the second half well on top but poor last tackle options caused the pressure to be relieved for the Titans.

In their second try against the run of play, Fogarty collected a Brooks grubber and scampered downfield before finding Don. From the ensuing play, quick hands left put Sami in for his second.

With just 17 minutes left on the clock, the Titans struck again. After some conjecture about a possible knock-on in the lead-up, a neat grubber from Peachey went into the in-goal and Boyd took full advantage. At 36-12, the Titans were seemingly home.

Again, the Tigers responded. After a ruck infringement, a quick tap from David Nofoaluma caught the Titans defence napping and the deficit was reduced.

With ten minutes to go, Adam Doueihi sent a long ball to Nofoaluma. He beat a clearly injury-hampered Kelly to reduce the deficit to 12.

The Tigers had their chances late, but a Luke Garner knock-on from a questionable Brooks pass took the wind out of their sails.

After David Fifita was sent to the sin-bin for a high shot. Doueihi crossed with a minute remaining but it was too little, too late from the Tigers.

After a spirited performance last week against the Dragon, the Tigers were out of the gates slowly tonight. It eventually proved too much. For their part, the Titans will happily take the two points. However, their inability to defend their line will keep the headaches coming for Justin Holbrook.

A great moment for Toby Sexton! 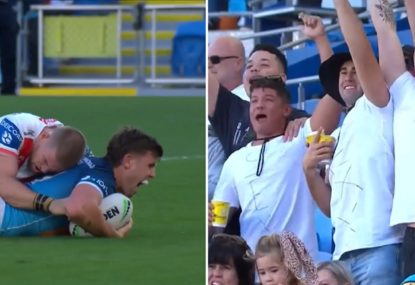 The Melbourne Storm have held on to defeat the Gold Coast Titans at Sunshine Coast Stadium. 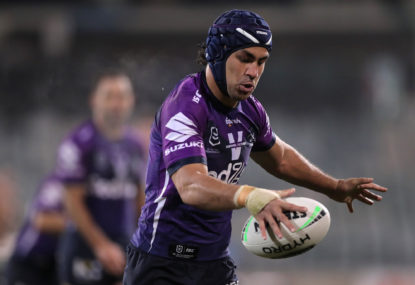