AdelaideAndy
Roar Pro
10th May, 2021
44
Join the conversation
Advertisement
Write for The Roar

Cassio whipping in a trademark cross from the left to Diego, who chested the ball down from eight yards and guided it into the corner of the net with the precision of a sniper’s shot. The crowd erupted like a volcano.

A highly-fancied and wealthy Bunyodkor – a team coached by Brazilian legend Zico and players comprising former World Player of the Year Rivaldo, Jose Luis Villaneuva and a host of Uzbek internationals – crumbled under the pressure of an intense, boisterous Hindmarsh Stadium crowd.

Its sole inhabitant currently is Adelaide United, but prior to that it was the home ground of the legendary Adelaide City Zebras, and later for West Adelaide Hellas in the National Soccer League.

Although only one of the stands is concealed with a roof, the noise generated by a parochial home crowd can be deafening and very intimidatory to an away team and its travelling support.

For such a small stadium, when the crowd’s in full voice, it feels double the size.

When you make your way up the old stairs to ground level, the first thing that catches your eyes is the luscious playing surface; it looks almost like a bowling green. It is the only stadium in the A-League that isn’t shared with a rival code and this means the pitch is always in pristine condition.

I’ve played on this hallowed turf many times over the years in the SA NPL and the ball zips around like you’re inside a pinball machine.

Being a local, I’m biased, but there are countless ex-Socceroos, coaches, rival fans, media and pundits who continue to wax lyrical about it being the best pitch in the league. 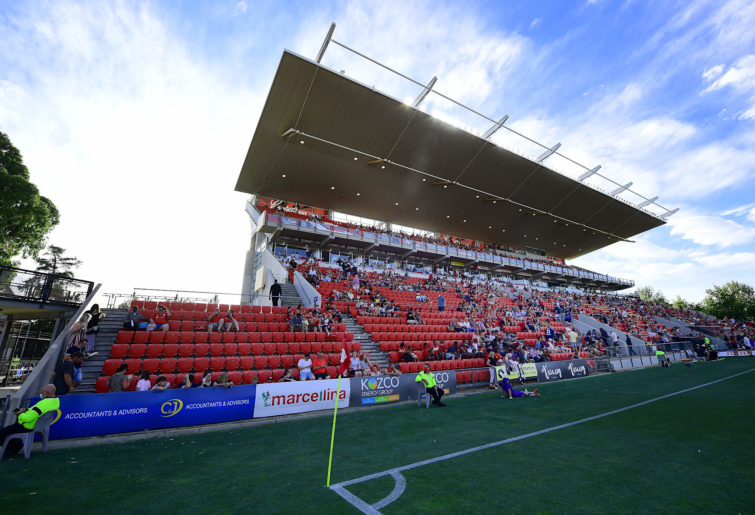 Although no longer large in size due to the active support crackdown of previous Football Australia chairmen, the main active supporters’ group is called the Red Army.

They are located at the northern end of Hindmarsh Stadium and aim to bring as much colour and noise to the ground as possible through their tifos, flags, displays, drumming, safe smoke and most importantly, chanting and singing.

The stadium can be accessed by a quick five-ten minute tram, bus, taxi or Uber for visitors staying in the heart of the city.

Food and drinks inside the stadium are your standard overpriced and not very tasty stadium-style food, but for weary interstate travellers, there are a lot of options for a pre or post-game feed within a five-minute walk.

If you’re into pub food there is the Joiners Arms, The Gov and the risqué Land of Promise. Enzos is your go-to for fine dining, Hindmarsh Pizza Bar for what the name suggests, or you could try my personal favourite: a chevapi roll from the nearby Serbian church.

Hindmarsh will undergo a long-overdue upgrade worth more than $45 million before the Women’s World Cup in 2023.

Bringing the stadium into the 21st century will see a major overhaul of amenities locals have clamoured for, such as: updated change rooms, a roof over the eastern grandstand, a new pitch, stadium lighting, two modern super screens, improved media facilities, better corporate areas, a new kitchen, air-conditioning and disability access.

I’ve been to massive stadiums like the Camp Nou, Stade de France, Luzhniki and Marakana; but just like Dorothy in The Wizard of Oz, there is no place like home.

Hindmarsh Stadium is the blueprint for football-only boutique stadiums in Australia.