The rule quirks that see foul play not penalised

Dutski
Roar Guru
10th May, 2021
29
Join the conversation
Advertisement
Write for The Roar

Round 9 of the NRL prompted much discussion about the handling of foul play.

The Eels-Roosters clash on Friday night led to suspensions for Parramatta’s Marata Niukore and Dylan Brown for incidents in one passage of play leading up to halftime.

The failure to follow due process in the handling of Brown’s ugly knees-first effort on the Rooster’s Drew Hutchison, including a 20-minute delay in putting Brown on report, saw bunker official Steve Chiddy dropped. At the time of the incidents Niukore was penalised and placed on report. Neither player was sin-binned, something NRL head of football Graham Annesley has since stated both incidents warranted.

While discussions have centred on the lack of sin-binning for either player – seriously, how can a hit be worth four weeks but not ten minutes? – what has been overlooked is a quirk in the rules that allows foul play to go unpunished in the context of the game.

The issue is that because Parramatta was penalised for Niukore‘s shoulder charge on James Tedesco, the later offence in the same passage of play by Dylan Brown could not also attract a penalty. It’s a two-for-one deal. While Brown was later reported and suspended, so did not get off completely free, in the context of the game the act itself was not penalised. 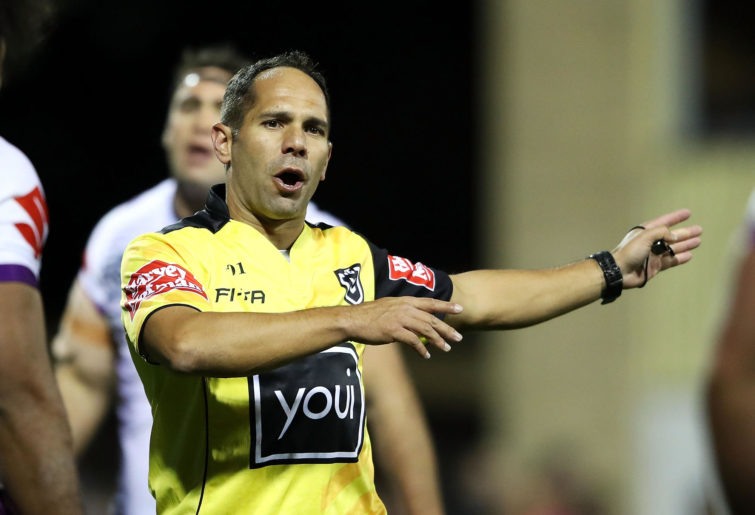 A subsequent infringement in the one passage of play is not the only instance where acts breaking the rules cannot attract an in-game penalty.

This brings back memories of Cooper Cronk when he was a devious Melbourne Storm player holding back a support player in the lead-up to a try – because the try was scored no penalty could be given.

Another instance is the awarding of a penalty try. If a player commits an infringement that prevents a probable try, a penalty try can be awarded. Some would argue that this is penalising the act of foul play. However, if that same act is not awarded a penalty try, the usual outcome is a penalty and sin-bin for a professional foul.

It raises the question: in a penalty try situation is the act of foul play punished or is there simply awarding of a try that would have been scored anyway and no real punishment for the infringement?

In the Dragons-Bulldogs game at the weekend it was clear that the decision not to award a penalty try to Jack Bird and instead send Will Hopoate to the bin gave the Saints a bigger advantage, with three tries scored while the Bulldogs were down to 12 players.

The NRL has talked about cracking down on foul play, yet these rare but important instances show how the rules of the game can actually prevent breaches of the rules from being penalised. Addressing these issues doesn’t seem too complicated.

In the instance of several infringements occurring in one play it’s not possible to award two penalties. However, there is a precedent – where a penalised player shows dissent the referee can advance the mark ten metres. The same principle can apply for multiple infringements. In the Niukore and Brown example the penalty would be awarded at the site of the first infringement and then advanced 10 metres, thus both acts would be penalised.

If a breach occurs in the lead-up to a try, why not offer a penalty kick for goal at the site of the infringement? That would cut down the chance of deliberate infringements, such as players being held back.

The other option would be to treat these cynical plays as the professional fouls they are and use the sin-bin. The reluctance of officials to sin-bin for even blatant fouls makes this less likely.

The current plan for eliminating foul play seems to have hinged on putting players on report with the threat of a fine or suspension. Players seem to be okay with a trip to the judiciary costing them a grand or a week as long as it doesn’t cost them the game they’re playing in the moment.

If the NRL is serious about cleaning up the game, it needs consequences to occur at the time of the offence and it needs rules that allow that to happen.