Here are The Roar’s NRL expert tipping panel to tell you all about Round 10.

No Thursday night footy means we get a little bit longer to wait, and an extra dose of the good stuff on Sunday, with the Tigers and Knights to get things going, before Manly face Brisbane.

With the Tigers making some strange-looking changes, and Tom Trbojevic setting the rugby league world on fire, it’s clear who the favourites are.

Saturday brings us the hapless Bulldogs against the equally out-of-form Raiders, then the Sharks up against the Rabbitohs with Adam Reynolds returning, before the injury-ravaged Roosters welcome back Lachlan Lam against the men from Townsville, who, just quietly, have started to turn something of a corner.

In saying that, Saturday will be an enormous test for the Cowboys.

Sunday’s triple-header kicks off with the Warriors and Eels, the former throwing it away last week and the latter almost unable to field a team for this week after allowing players to take part in reserve grade last week.

The Storm, minus Cameron Munster, Ryan Papenhuyzen and Brandon Smith will still somehow go in as favourites against the Dragons too, before the Panthers look to make it ten on the bounce come Sunday night against the unpredictable Titans, who miss David Fifita.

Last week saw David, The Barry and myself all land seven (I missed Manly, they missed the Raiders), while Mary had six after tipping Brisbane. AJ continues to fall further behind the pack, only registering four.

It means The Barry leads The Crowd by one, David by three, Mary by five, me by six and AJ by… I needed a calculator, but 13.

Remember to get your tips into the form below by 6pm (AEDT) on Friday (yes, we are giving you an extra 24 hours!) to join The Roar’s NRL tipping competition for 2021 and be featured as part of The Crowd’s tips for Round 10.

David can lead away this week.

In the NRL, we have plenty of “Rounds”. ANZAC Round, Indigenous Round and Women in League Round, to name just a few. All of these commemorate or celebrate an important part of our game.

Magic Round, on the other hand, doesn’t really do it for me. In fact, I think it needs to be renamed. The Bubble goes to Brisbane Round or the Round of Annastacia both have nice rings to them.

But I digress. Nothing much happened in footy tipping last weekend, well, other than AJ falling further into the abyss. I’m prepared to call it, AJ can’t win.

But, everyone else can and this weekend may go some way to sorting out the tipping leaderboard.

We skip Thursday night footy this week so first up on Friday we have the Tigers and Knights. Call me old fashioned, but I’ve always thought that it’s good to have your best player closer to the action. Moving Adam Doueihi to the centres is nuts. Knights to win. 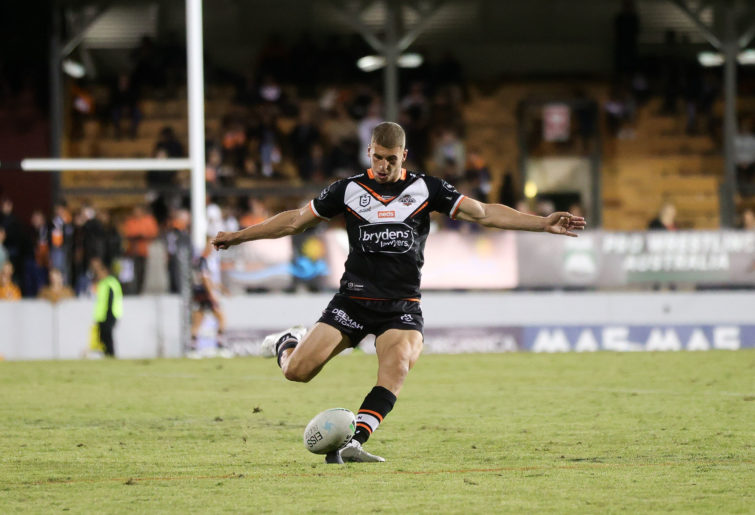 No favouritism here, but the Broncos are the only team to have a home game this week. It won’t help them. Marty Taupau is a big in for the Sea Eagles and I’m not convinced that Brisbane are much better than they were a month ago.

The Raiders are out on their feet but they will beat the Bulldogs. If Trent Barrett got Kyle Flanagan to front the media and then sack him, he should be picked apart by the media. Barrett is not a good coach and he never will be. Rant over.

Next up, we have the battle of the nils, the Sharks and Rabbits. It doesn’t make sense to me that most of the Cronulla team are playing for contracts, but are still waving their hands in the air like they just don’t care. The Rabbits will pile on some more misery for the Shire boys.

The Roosters are missing a few players, but they are hardly Robinson Crusoe there. They still have a strong look about them. Jason Taumalolo strengthens the Cowboys line up but I don’t think they are quite up to the Roosters yet.

First up on Sunday afternoon, we get to see the second-best father/son combination in the league as Jakob Arthur makes his debut for the Eels. This has the smell of ambush. Reed Mahoney has been named but is doubtful, and the Eels looked like a rabble at times without him last weekend. Warriors to spring an upset.

The Storm have made their intentions clear for Sunday. Without their two best hookers and Cameron Munster, they will look to steamroll the Dragons pack. The Storm won’t be scoring as many points as usual but I can’t see the Dragons matching them.

Over their last four games, the Titans have conceded a minimum 28 points per game.They run into a team that has conceded 60 points all season. This will get ugly. Penrith

So much for the uncertainty of Round 9. Another week, another seven from eight.

Speaking of uncertainty – and in honour of Magic Round – Michael Maguire has started using a magic 8-ball to pick his lineup. “Should I pick Moses Mbye in the centres” – shake, shake, shake – outlook not good.

Manly have been in smoking hot form lately, but I wonder how much the Magic Round crowd can lift the Broncos here. Might be closer than it looks on paper but I’m sticking with the Trb-Eagles.

The Bulldogs face old boy Corey Harawira-Naera on Saturday. In two 80-minute games in the past fortnight he’s made 12 runs and had 15 ineffective tackles. As much as the Raiders are struggling, the Bulldogs are worse.

I’m interested to see Andrew Fifita return but Souths fans will be more excited to get Adam Reynolds back so early. Souths to rediscover winning ways and win well.

The Roosters are still fielding a formidable lineup considering they’re down to their second choice halfback, third choice five-eighth and sixth choice hooker. The Cowboys are surging with four wins from their last five but face a litmus test against the Roosters. Easts to edge them out.

Storm to get closer to another 50 than the Dragons get to them.

This will be only the third time all season that the Titans have played a team in the current top eight. Panthers will win but interested to see how the Titans measure up – are they a genuine top eight contender?

As much as The Barry thinks I have been trying to keep things interesting by tipping upsets, that hasn’t been the intention, and he will be disappointed to know I can’t see a lot going wrong for the favourites this week.

The Tigers are a rabble. Adam Doueihi in the centres? Moses Mbye to the halves? Jock Madden on the bench? Jake Simpkin dropped? Yeah, Knights by a squillion.

It might be in Brisbane, but Tom Trbojevic is doing some pretty incredible things just at the moment. Some of the top teams might be able to stop him, but a top team the Broncos are not.

Surely the Raiders have to turn it around now? A loss to the battling Bulldogs would probably result in crisis meetings early next week. Give me the Green Machine.

Cronulla have just lost Shaun Johnson for another fortnight, they aren’t playing all that well, and the Rabbitohs wouldn’t have had an overly fun week at training they will want to repeat anytime soon following their 50-point beatdown at the hands of Melbourne. Adam Reynolds is back and will have a point to prove. Rabbitohs by a lot.

The Roosters continue to win despite their injuries and that won’t change here against the Cowboys, although they have improved.

Sunday brings the only remotely interesting contests. The Eels have been training in two groups, stuck in hotel rooms and have injuries to deal with. The Warriors were impressive in attack last week, even if not defence. With no Dylan Brown, that may not be such an issue this time around. I’ll take the upset.

The Storm have a mountain of players out, so it makes me want to believe the Dragons are a chance. In truth, they probably will come close but fall short, so, out of wanting to win this thing for a change, give me the Storm.

And finally, it has to be the Panthers. They will lose eventually, but to a Titans side missing David Fifita? I don’t think so.

Given the changes to the Wests Tigers line-up, it’s becoming increasingly difficult to tip them. Adam Doueihi has been one of the Tigers best players so it is baffling that he is being moved to the centres.

For the Knights, they will be full of confidence following their win against the Raiders last week and will be boosted by the return of Tex Hoy.

It’s hard to tip against the Sea Eagles when Tom Trbojevic plays. It’s quite incredible how much of a difference he has made to this Manly team. I’m tipping the Sea Eagles to beat the Broncos who have had a tough week given the news Xavier Coates has signed with the Storm.

It’s fair to say the Raiders are on struggle street. They remind me very much of the 2019 Raiders and have not only lost their way in attack, but the defence that took them so far last year, does not seem to be as solid anymore.

Fortunately, they come up against the Bulldogs this weekend who have enough problems of their own. The Raiders will win. 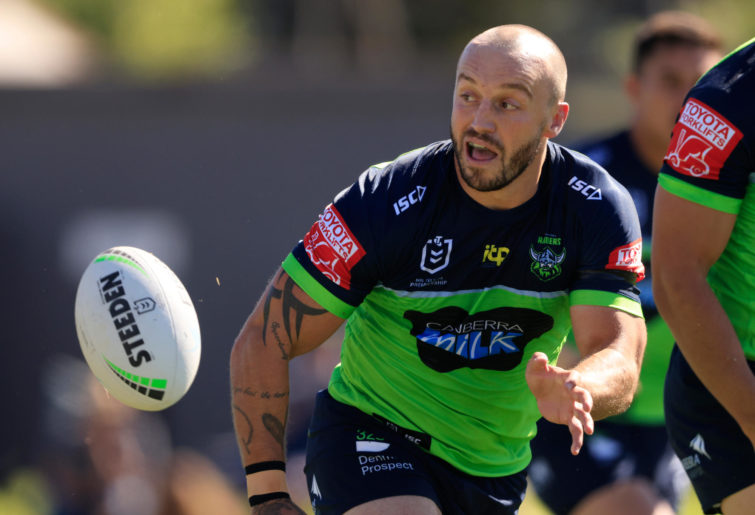 Josh Hodgson of the Raiders (Photo by Mark Evans/Getty Images)

The Rabbitohs will beat the Sharks and the Roosters, despite their injuries, should have no problems beating the Cowboys.

Despite the Eels challenges with players, I’m expecting them to beat the Warriors. Whilst Reece Walsh is an impressive talent, I question whether he is ready for first grade. I also question the Warriors defence given how easy Manly were able to break through last weekend.

The Storm will beat the Dragons and the Panthers should easily beat the Titans (although I’m expecting plenty of points to be scored in that one).

Magic round! Where the magic happens. And this week, it’s me tipping the card and moving up and up and away!

Madge’s Tigers will get Newcastle, who fell over the line thanks to dubious refereeing last week.

Broncos to swell in their away game at home and knock off the Manly Trbojevic.

Your premiership favourites the beautiful Canberra Raiders by 68 over the pathetic Bulldogs, who hung a 22-year-old out to dry in a shameful PR stuff up this week.

Cowboys over Roosters cos why the hell not?

Eels over Warriors, who I have immense respect for but absolutely will not tip.

Storm by a thousand over the dinged up Dragons and finally, the Gold Coast to put the Panthers in the loss column for the first time in what I predict will be a total barn burner of a game – 38-37.

Remember to get your tips in on the form below by 6pm tomorrow to be counted as part of The Crowd for this weekend.