Why the Titans are the NRL's most inconsistent team

Anton
Roar Pro
16th May, 2021
8
Join the conversation
Advertisement
Write for The Roar

When the Gold Coast Titans signed forwards David Fifita and Tino Fa’asuamaleaui a lot of people had the Titans in the top eight and even being premiership contenders in 2021.

This was especially the case considering the side already had other good players on the books, like AJ Brimson, who played origin for Queensland last year; Jamal Fogarty, who had a good 2020; boom centre Brian Kelly; and Tyrone Peachey.

The Titans have also picked up other players during the preseason, including Sam McIntyre, Erin Clark, Herman Ese’ese, Patrick Herbert, and they picked up former Cowboys centre Esan Marsters in the last fortnight, so they haven’t been passive with signing players.

The Titans came out in 2021 with a 19-6 loss against the New Zealand Warriors, beat the Broncos 28-16 in Round 2 and then dominated the Cowboys 44-8 the following week, but after the Newcastle Knights game in Round 5 and after the Gold Coast thrashed them 42-6 they haven’t been the same.

In Round 6 they lost 36-0 to the Manly Sea Eagles, choked a lead against the South Sydney Rabbitohs the following week and lost to the Broncos 36-28. They beat the Wests Tigers 36-28, but this latest round they took on the Penrith Panthers and got flogged 48-12 after Panthers halfback Nathan Cleary scored a hat-trick and had two try assists.

I know the Titans didn’t have David Fifita, but they still had Brimson, Fogarty, Kelly and Peachey and still got flogged. Their defence during this game was very poor. The Titans had 40 missed tackles compared to the Panthers’ 17 – and I don’t want to hear anyone say the Panthers had more possession or didn’t have to make many tackles.

The Titans made 314 tackles and Penrith made 297, so there can be no argument there, and the possession percentage was only 45-55 to the 10-0 Panthers side, so you could mount a case, but the Panthers still had to make close to the same number of tackles the Titans had to make.

The Titans have been the most up-and-down side during the 2021 season, especially with the players they have and signed during the preseason and during the season. They either win big or lose in a concerning fashion.

Gold Coast take on the Bulldogs next week and the Doggies are currently last, but you know they will play with their hearts on their sleeves. They lost by only two points against the Canberra Raiders during this latest round despite choking a lead against the green machine.

The next two Titans games will be against the Bulldogs and the Sharks, who they will most likely beat comprehensively, but then after the Sharks game they will take on the Melbourne Storm, and I’m calling it right now that they will get embarrassed and their up-and-down form will continue.

David Fifita copped a lot of criticism last season even though he had a very good year in a lot of ways. 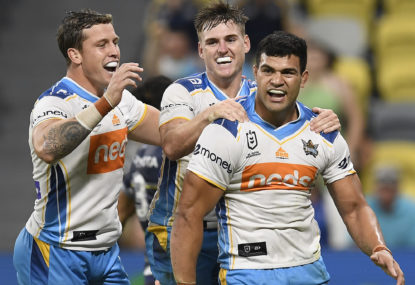