This division came down to the very last game to decide the division winner and the team awarded the President’s Trophy.

Colorado Avalanche breezed by LA Kings once again to tie Vegas Golden Knights in points but had the tiebreaker to take both. Colorado and Vegas finished top-two in the league in points, so if these teams face each other in the second round, it looks to be an amazing match-up.

Both the Colorado Avalanche and the St Louis Blues are set to play as the first and fourth seeds in the West division.

Each team has been rolling coming into this match-up, with Colorado on a five-game win streak and St Louis on a three-game run.

These teams play each other in a playoff series for the second time in history and the first since the 2001 Western Conference finals. It has been a tight battle between these two teams, but the Avalanche come in with the advantage after winning five of eight games during the regular season.

Colorado also has the advantage in goals for, too, with 26-21. Surprisingly, a low-scoring season series compared to how these teams rank in goals-for overall. 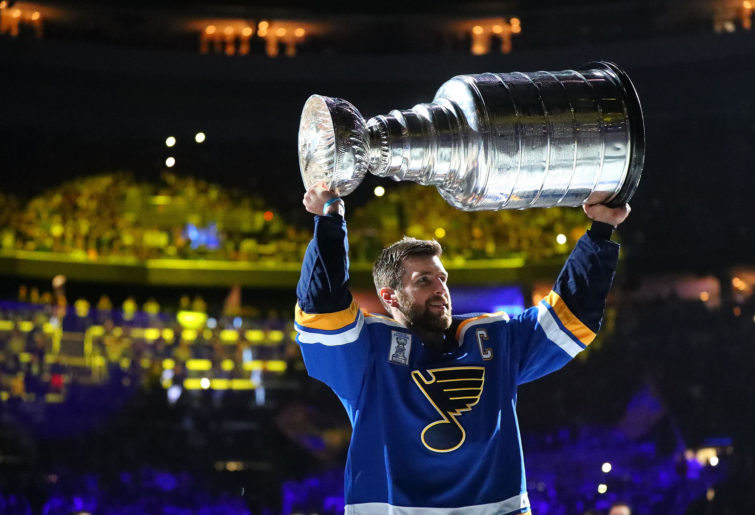 Could the Blues lift another Cup? (Photo by Dilip Vishwanat/Getty Images)

Colorado finished the season with the most goals scored and St Louis ended theirs at 12th. Colorado also comes in with the third-best goals against in the league, so they just seem dominant against almost any opponent. The comparison between the goal differential between the two teams is 65.

Cale Makar has reached multiple milestones this year in points and the young defence around him hopes to make a dent this postseason and continue to prove to be very tough to play against.

Rivalling the “Perfection Line” in Boston is the top line for the Avalanche, consisting of Gabriel Landeskog, Nathan MacKinnon, and Mikko Rantanen.

MacKinnon had the most points in this season series between Colorado and St Louis with 14, while on the other side, Ryan O’Reilly only had seven points in eight games.

St Louis is going to have to play like they have near the end of the season to be able to even compete with the President’s Trophy winners, and it still may not be enough.

The only problem that has arisen for Colorado is when Philipp Grubauer has gone down to injury and the backups haven’t been able to make a save.

Just a short two seasons ago, the Blues pulled off a run that took them from last place at Christmas to winning the Stanley Cup for the first time in their history, so anything could happen.

But with David Perron just entering COVID-protocol and Vladimir Tarasenko’s injuries being present even more of late, as well as throughout this season and his career, they will be a bit shorthanded and will look for someone to step up.

They are a different team from two years ago, and with the departure of Alex Pietrangelo in the offseason, they had hoped that Torey Krug could fill some of that hole and Colton Parayko would take the next step.

That hasn’t seemed to go as well as they envisioned.

They will hope that their depth can make an impact, with players like Sammy Blais, Robert Thomas, Jordan Kyrou, and Klim Kostin.

With how unstoppable Colorado has been this season, I see them taking this series in six games, or maybe even less.

They may have matched up more evenly in the regular season, but with a healthy squad and a banged up team in the Blues, this will be over before Game 7.

Minnesota has been struggling as of late and Vegas has been rolling, so I leaned toward the Golden Knights to take this series in five games.

Though Minnesota has been great on the back end with Cam Talbot and Kappo Kahkonen, they still don’t match up to the William M. Jennings Trophy winners in Marc-Andre Fleury and Robin Lehner.

Also, Fleury looks to be a top contender for the Vezina Trophy as well this season and just recently moved into third all-time in wins.

The Minnesota Wild have been one of the biggest and exciting surprises this season of the teams, along with the Florida Panthers, and neither have won a Stanley Cup, so it wouldn’t be the worst thing to watch them make a deep run.

But unluckily for them, they meet the second-best team in the regular season.

Kirill Kaprizov may prove to be a problem for Vegas, but the depth for the Wild just doesn’t match up to what Vegas has in the line-up.

Kaprizov is the leading candidate for rookie of the year and is the best player on the Wild this season. If Vegas can shut him down, they will breeze by Minnesota in Round 1.

This is the first time these teams will meet in the playoffs and Vegas already has more playoff series wins in their history with five. Minnesota only have four, despite being in the league 17 more years than the Golden Knights.

Both teams have been a force this season.