That year he kicked 28 goals. He became the new wiz. He was mercurial around goals but he took pride in his defensive pressure. This was a big step for Rioli who evolved, almost overnight, into an elite small forward.

This was the same kid who lost 16 kilos to get drafted in the AFL and the same humble talent that found a home with the Eagles but never forgot his Tiwi Island roots.

Fast forward almost three years and he could be on the verge of packing it all up, as Eagles coach Adam Simpson, the players, and key stakeholders are now deciding on what to do with Rioli after he was found with 24.2 grams of dope concealed on his body at Darwin Airport last week.

This was on top of a two-year ASADA ban he was serving that started in 2019 for testing positive for cannabis. The knee-jerk thing to do right now would be to offload him to another team and become someone else’s problem. But that would be the easy way out. 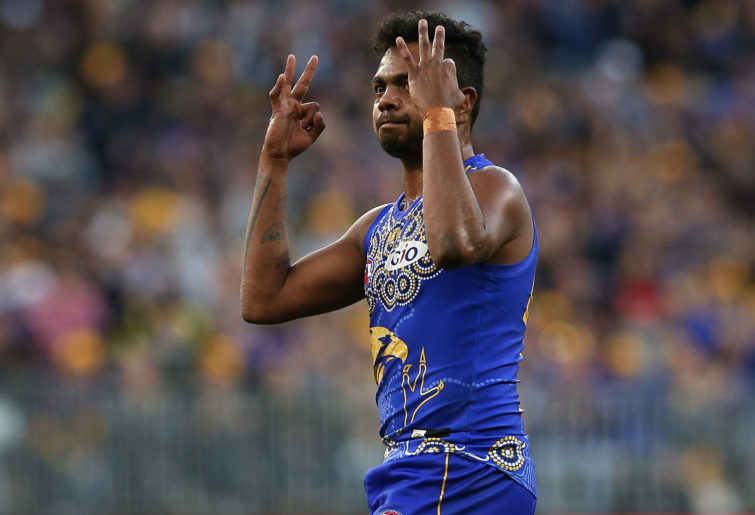 Willie Rioli of the Eagles (Photo by Paul Kane/Getty Images)

What we don’t know about Rioli is if he’s dealing with any depression or mental health struggles. The isolating ASADA ban can have this kind of effect. Without the day-to-day physical support of his club, no less through a global pandemic, it can be hard to stay the course, keep fit and stay mentally focused.

And once you start to think about Rioli’s plight and the potential personal turmoil he could be enduring, you automatically want him to feel supported by the football community. And while the words “drug use” can leave a lasting stain, Rioli shouldn’t be judged on his brief history of cannabis use, but rather, what he does next.

Eliza Reilly, a journalist who covered the Rioli trial in Darwin, said Willie looked distraught, nervous and scared. This is different to the family-first, humble, happy-go-lucky kid that we’re used to seeing on interviews. The timing of all this is horrendous which adds another wrinkle.

Rioli was on the verge of returning from the football abyss and was due to start training at West Coast on June 20, ahead of being eligible for action in Round 23. He’s still on track for this timeline but things could change pretty quickly if the Eagles throw a curveball at Willie.

Essendon legend Michael Long, Rioli’s uncle, said Willie needed a hand up not a hand out.

“He’s made mistakes and if he comes through the other end that’s a really important strong message,” Long said. “As a young man he knows he has to change his life for his own sake, for his own kids, for his own community.”

Dermott Brereton said football clubs have a mandate to make players better people than when they started. Consider, then, Rioli a work in progress.

Rioli’s mental health is the priority here and the Eagles need to see this through. It’s a tough quandary for the club. They might not get the return on Rioli they’d hoped for.

The track record he’s chalked up begs trust issues, but as most football media heads alluded to last week, the Eagles will have to go into this next phase with Willie with a pastoral approach and just accept that Rioli could relapse because cutting him now during a time of need would be brutally harsh and careless.

But it’s hard seeing the Eagles go down that road.

The hardest part that Rioli might have to accept is that sometimes trust can’t ever be fully earned back once it is lost. But if he’s willing to grind, work at it, get his focus back on football, this could be the start of a wonderful story about Rioli working his way back.

And that must be his goal. He must envision a future where he’s helped the Eagles to another premiership, where a journalist would write about how far he’s come and the maturity he’s shown to improve himself and do the work required to climb the mountain.

Rioli’s captain and coach spoke about their reactions to all of this chaotic news and although both were deeply disappointed, it was obvious that they had his back. Eagles captain Luke Shuey expressed his thoughts and said the club doesn’t condone his actions.

“He’s still one of us. (we need to) make sure he’s right mentally,” he said. “If he’s with us going forward, we’ll make sure everyone buys into that and all on board.”

And coach Adam Simpson said he’s willing to trust Rioli again. “No-one is perfect but we’re a football club as well and we represent a lot of people so try to do the right thing by them as well. That’s our challenge.”

No-one wants to think about the worst case scenario for Rioli and that is, him falling out of favour with the Eagles and spiralling.

In 2019 when he was caught tampering with a drug sample, he said “I’ve been proving doubters wrong my whole life. I’ll definitely come back bigger and better.” What Rioli must do is commit to repairing his relationship with his club and his teammates if given another chance to redeem himself.

Then give back to the club wholeheartedly, work on the best version of Willie Rioli and the rest will take care of itself.