Rugby coaching is nothing without accountability

The Legend of El Cid tells of a great Spanish commander who led his countrymen to an unlikely victory against the invading Moors in the 11th century.

Late in the battle it appeared to both sides that El Cid was mortally wounded. With El Cid out front, the Spanish were impenetrable.

Sensing vulnerability, on daybreak and with reinforced confidence the Moors readied for attack.

Suddenly the city gates sprung open and the Spanish attacked, led on horseback by none other than El Cid!

While the Spanish were buoyed by the sudden recovery of their talisman, the invaders were equally dismayed and swiftly defeated.

The legend later tells that, unbeknown to both sides, El Cid died the previous evening. But ever the tactical genius, understanding his effect on both his own and the enemy soldiers, with his dying words he instructed that his dead body be strapped upright on his horse to lead his soldiers in one final battle – to victory.

People love a story manifesting strong value sets beating poor value sets, particularly against the odds. The stories manifested from real-life events are most resonant, and sport is often the canvas.

Think about Muhammad Ali’s stand against conscription and racism, which led to him being vilified and banned during the best years of his career. His comebacks, though, coupled with his firm moral stance has him remembered as one of the most celebrated sport stars and activists in history.

A key value underpinning these stories is accountability. There are a number of actions and values that feed into being accountable. All are attributes that people want to follow.

After taking Leinster to European Rugby Champions Cup glory Michael Cheika took the game and Australians with him, firstly through the Waratahs in their 2014 Super Rugby triumph and then with the Wallabies all the way to the 2015 World Cup Final.

But when that initial ride morphed into constant referee blaming, public blow-ups and ritualistic post-game rants he became hard to like. It all reeked of a lack of accountability to what was needed to progress the Wallabies game. Associates, supporters and fans alike were cartwheeling out the side.

Ironically, the thoughtful, analytical side that I’m sure his inner circle were accustomed to is being revealed since his turn to commentary.

Coaching can be either ultimately rewarding or, frankly, suck. It’s bloody hard to be accountable when the roof over your head and your kids’ schooling is at risk of being pulled out from under you.

Support for rugby is seemingly on the way back, and I want to see it continue, but if there’s one thing that will continue digging the hole that the sport is climbing out of, it’s coaching accountability both in terms of getting the skill improvements needed for the game to thrive and eliminating the narrative which is hard to support – that it’s always someone else’s fault.

The following are all good coaches and good people that are under huge pressure, but these are just some examples.

Just 48 hours prior to standing down as Rebels head coach Dave Wessels went on a bizarre rant telling all and sundry that the Rebels were severely disadvantaged compared to the other franchises in Australia. It’s surprising that previous head coaches Damien Hill and Tony McGahan never mentioned these constraints. He also stated their attack wasn’t up to scratch.

With attack coach Shaun Berne given his marching orders shortly afterwards, It’s clear who that arrow was fired at. While Berne’s out the door, it is ironic also that Wessels has moved into a transitionary role with the club.

What also needs to be understood is that unless the attack coach is the head coach it’s rare they get to deliver their own attacking strategy. They deliver what the head coach wants. As I said in a previous article, disagree and commit. It’s what team players do.

While attack coaches generally don’t get much leeway, ironically defence coaches often get free rein – which we’ll come back to.

The Rebels attack system belonged to Dave Wessels, just as the Waratahs structure was owned by Rob Penney prior to his removal – a derivative of the old Canterbury/Crusaders 2-4-2. 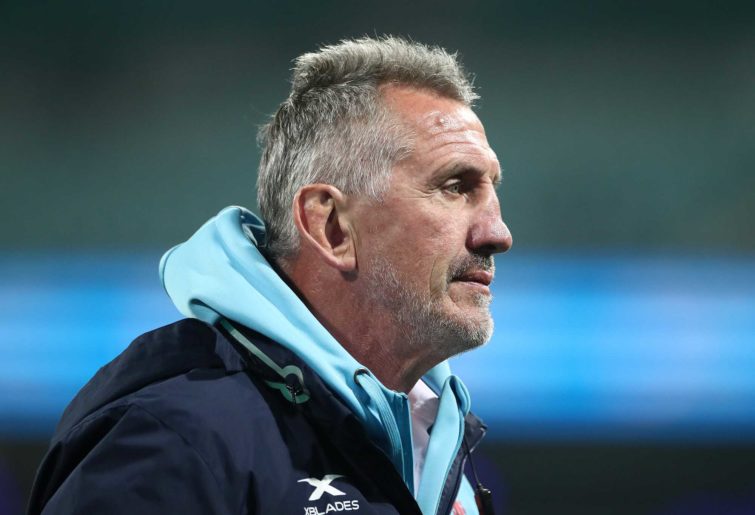 There are exceptions. I’d argue Brad Thorn allows Jim Mackay autonomy in the Reds attack. Since Penney moved on, Chris Whitaker has stamped his signature on the Waratahs attack, which in a short period has improved significantly.

When their breakdown was accurate, the Rebels strung together some good performances. But when forced to overcommit at their first or second breakdown their ability to link attack across the full width of the field fell apart – a system issue belonging to the system’s architect, Dave Wessels!

Attack coaches deliver their expertise within the head coach’s system. If the system is flawed, it doesn’t matter how good the attack coach is.

With the blow torch on, accountability went up in flames.

It’s also interesting to note that the Rebels in their last start, without Berne as their attack coach, did not fire a single shot.

It’s easy to point to the fact that they were missing key players, but so were the Brumbies against the Crusaders, yet all year their back-end squad and academy members have continually stepped up.

As for the Brumbies, I have enormous respect and admiration for Dan McKellar, but losing two games to the Reds and their title as the No. 1 team in Australia wasn’t the referee’s fault.

Further, too often when the ball is on the ground support players clean out on an illegal line – from the side. The frequency for which this happens suggests that it has to be a coached technique.

The footage below demonstrates this.

Yes, Nic Berry should have penalised Liam Wright, but he should also have penalised Scott Sio in the first instance for cleaning out from an illegal position. It goes two ways.

Ironically, if Sio had gone on the shortest line to the breakdown, he would have entered from through the gate and easily removed Wright north-south from the contest before there was opportunity to get hands on the ball and with no opportunity to infringe. This is highlighted below.

These are coaching issues (controllable), and it’s then out of the ref’s hands (uncontrollable).

The Brumbies also coach a number of different styles of tackle. A key point here is that tackling is often reactive – if there are too many choices for tackle type, the reactive component of execution is affected.

For every decision added to a situation reaction time doubles.

One of those tackle types with MMA influence is the upright tackle, which creates an ethical dilemma due to the prevalence of head contact for both the ball carrier and the tackler. Combined, the upright tackle and opposition late changes of direction leave a narrow window for error.

Brumbies captain Allan Alaalatoa was suspended for three weeks for a reactive high shot. In his comeback against the Reds he was lucky again not to be sent off for a similar tackle. During the same game Andy Muirhead missed an easy tackle on Josh Flook that resulted in a key try – again, going high. A small man going high takes leg drive and power out of the tackle.

In the Super Rugby AU final Rob Valetini was sin-binned for a high shot. At the time the Brumbies were leading comfortably. While they didn’t give up many points in the period that he was off, on the flip side how many more points could they have accumulated if their best ball carrier remained on the field?

Maybe enough to put the result out of reach. Who knows?

But at what point are these preparation issues both accountable and contributing factors to a loss?

They are at least controllable; the referee is not.

If I’m reading reports correctly, the Waratahs defence coach this week intimated that their issues in defence are because the franchise has never had a defensive mindset and the players aren’t being accountable for their defensive technique.

The defensive coach is accountable for putting players in the right place to make tackles – that is, the system – and for remediating technical issues through coaching and training.

He also had a crack at his players during the halftime break of the last Brumbies game for not aiming up on Muirhead out on the edge.

The play in question is below. Before the lineout started, Muirhead had already aligned wide. Prior to this game the Brumbies had scored six tries from the same play. Yet the Waratahs aligned as though they had never seen it. Their last defender, Jack Maddocks, started just outside the far goal post, leaving 30 metres undefended.

Muirhead had to check on the pass but still had plenty of time and space to work in.

A key objective of defence is to deny time and space.

Arguably one of the hardest tackles to make is when you’re caught too far inside the opposition and have to hightail it on a backwards line across the field to get to them. This situation is bread and butter for good attacking players.

The aim of a defensive system is to place players in the best position to tackle or defend. The Waratahs have been in poor positions all year – that’s a coaching issue.

This past weekend, after giving up 60 points, the line is that the players have to be accountable to get their bodies in front. It’s pretty hard to get bodies in front if the system doesn’t consistently place bodies in front. The Waratahs have been defending too narrowly all year. As highlighted above, they leave too much space on the field and they’re easy to pick off. This is a system and coaching issue. The other line of concern was that players need to grab others at the conclusion of training and do their own tackling. Players can always do more, but what are they doing in training?

With defence clearly an issue all season, it’s the coach’s job to design interventions and adjust systems in training that fix the problem. Otherwise why have coaches?

One thing I find impressive about Eddie Jones is that he’s always accountable. If his team loses, he says he didn’t prepare them well enough.

It communicates to the players and fans alike that there is an answer and they will find it, fix it but that the coach is looking at themselves first.

There’s a clear distinction between what can be controlled – what a coach is accountable for – and what can’t be mastered.

I’ve also previously highlighted the evolution of James O’Connor. He was criticised after the Super Rugby AU win for not taking a scrum in the dying stages.

His response was that the team didn’t want to risk putting the result in the hand of someone else — in the result of a refereeing interpretation. It was a mature and accountable decision.

I’d argue that these are traits that fans and supporters want to and will follow.

El Cid in life proclaimed, “Follow me and win”.

Even in death he still had the answers!