News
23rd May, 2021
3
Join the conversation
Advertisement
Write for The Roar

Jake Stringer and Sam Draper could return from injury this week to bolster an Essendon side riding high on confidence after banking consecutive AFL wins.

Star forward Jake Stringer is a chance to return from injury against West Coast to bolster Essendon’s chances of recording a third consecutive AFL victory.

The Bombers are riding high on confidence after backing up a gritty win over Fremantle with a 72-point thrashing of North Melbourne on Sunday.

First-year coach Ben Rutten was pleased with the ruthless streak his side showed against the last-placed Kangaroos.

The next step, Rutten said, is to challenge the competition’s better sides, with the Bombers (4-6) to start underdogs against West Coast (6-4) in Perth on Saturday night.

The possible return of Stringer (hamstring) and ruckman Sam Draper (ankle) could help their chances.

“We might have Stringer and Draper getting close … they had a pretty solid session (on Saturday) that they’ll need to recover from,” Rutten said.

“They need to get through training this week and we’ll assess what’s going to be best for them.”

Essendon are eyeing their first interstate win of the season after four failed attempts and face a West Coast side that is unbeaten at Optus Stadium in 2021.

The Eagles (6-4) sit seventh and are smarting from having their three-match winning streak snapped by GWS on Sunday.

“It’s always a great challenge to play over in Perth and West Coast have won a few in a row (before losing to GWS) so I’m sure it’s an opportunity that our group will be looking forward to.

“We want to be in these games against other teams around us and then ultimately start being a real threat and beating the higher teams on the ladder.

“That’s where we’re heading as a group.”

Former West Coast forward Alec Waterman is a good chance to retain his spot to take on his old side for the first time.

The 24-year-old, who was cut down by injury and illness during his time with the Eagles, kicked two goals for the Bombers against North Melbourne after spending four weeks in the reserves.

“We sent him back to the VFL to grow and expand his game a little bit and he’s been doing that, playing a bit more time through the midfield and higher half-forward roles,” Rutten said.

“(On Sunday) he got an opportunity to put that on show.

“He’s really applied himself and got clarity about how he can be a regular senior player for us.”

Plenty of mullets about at Marvel! Sam Draper had a cracker of a game, kicking two goals and dominating the hit outs along with… 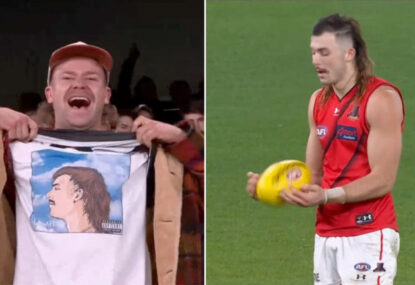 Fantastic to see from Massimo and the D'Ambrosios! 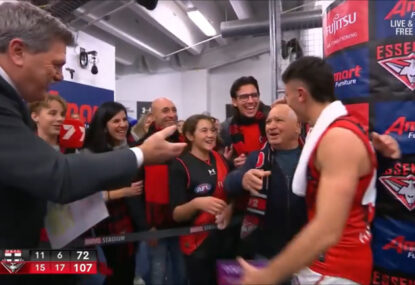 'I didn't see it coming': Ratten flattened by heavy loss to Bombers

Brett Ratten didn't like anything he saw in the 107-72 loss to Essendon. The Saints' coach was particularly upset with the 'below par' effort… 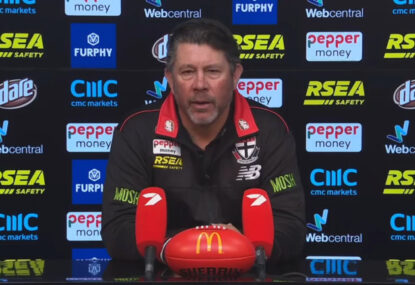 'I didn't see it coming': Ratten flattened by heavy loss to Bombers