Avatar
Roar Guru
24th May, 2021
53
Join the conversation
Advertisement
Write for The Roar

For the second Friday night in a row we have a blockbuster clash of genuine premiership contenders when the top two teams on the ladder, the Western Bulldogs and Melbourne, face off in what promises to be another finals entree at Marvel Stadium to kick off Round 11.

As we approach the halfway mark of the 2021 season, it’s the Bulldogs and Dees who have set the pace, with the former side sitting on top of the ladder by way of a superior percentage, which received a boost after they thrashed St Kilda by 111 points last Saturday night.

Forward Aaron Naughton ran riot in the second half, kicking five goals and four behinds, which was one point more than what the entire St Kilda side could manage for the entire match.

Jack Macrae also continued to smash the record books, becoming the first player in VFL and AFL history to record more than 30 disposals in each of the opening ten matches of a season, while captain Marcus Bontempelli booted a career-best four goals to go with his 26 touches.

It was their second win of more than 100 points this season, after they thrashed North Melbourne by 128 points on Good Friday in Round 3. This, therefore, makes it the first time Luke Beveridge’s side have won two matches by a triple-figure margin in a single season.

They have also become the first team to crack 1000 points, while the 638 points they have conceded is also a league-best.

Five years after witnessing their side come from the clouds to claim an unexpected premiership, the prospect of another flag, which would be just their third in club history, has seen the expectations and excitement among the Bulldogs fans grow once again.

And while the Brisbane Lions and Richmond may be among the current premiership favourites, the Dogs could give both of them a good run for their money should they have to face either team this September.

Already they have beaten the Lions in Ballarat in Round 4, while they squandered a strong start to lose to the Tigers at the MCG in Round 7 in what is their only defeat for the season to date. 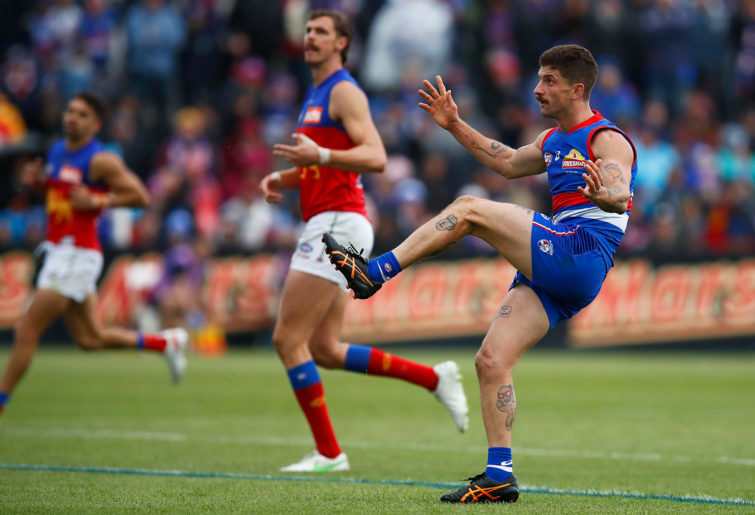 On the other hand, Melbourne enjoyed its best start to a season in over half a century before they suffered a controversial and heartbreaking one-point loss to the Adelaide Crows at the Oval, also last Saturday night.

The Dees had led by 16 points halfway through the final quarter, when best-on-ground Clayton Oliver booted his third goal, before coughing up the final three majors of the game, the last of them to ex-Crows captain Taylor Walker who converted with less than a minute remaining.

Simon Goodwin’s side then went forward from the ensuing centre clearance, and were very unlucky not to have won a free kick when the umpire failed to pick up on a deliberate knock out-of-bounds from a Crows defender at the death.

Goodwin refused to concede that it was the loss that Melbourne had to have, though he and the team could’ve been accused of having one eye on this Friday night’s blockbuster clash against the Bulldogs at Docklands.

Not only did it put an end to the Dees’ undefeated start to the season, it also ended an 11-match winning streak dating back to Round 17 last season; whereby they won their final two games of the 2020 season as they fell short of a miracle finals berth.

The top-of-the-table clash between the Bulldogs and the Dees is heavens away from their Round 18, 2003 meeting when the two teams contested a Friday night bottom-of-the-table mockbuster in front of 20,714 fans at the ground then known as Telstra Dome.

On that occasion, the Bulldogs won by 21 points for the last of their three wins that year, the other two being both against the Geelong Cats in Rounds 1 and 16; then-captain Chris Grant suffered a season-ending ACL injury in the former game.

Grant’s absence had a major impact on the side, which would eventually finish last on the ladder.

That season, Melbourne was terribly inconsistent, finishing third-last in a period whereby they alternated between reaching the finals and missing out in consecutive years.

They had only reached the grand final as recently as 2000, only to fall victim to a rampant Essendon machine which, led by James Hird, completed the most dominant calendar year in AFL history with only one defeat for that 12-month period.

Generally, this will be the first time the Dogs and Dees have met on a Friday night since Round 15, 2011, and with a 75 per cent capacity limit on Marvel Stadium, it’s anticipated that up to 42,000 fans will be permitted into the indoor venue for what promises to be a pre-finals blockbuster.

And with hundreds of thousands more watching on television, the Seven Network can also expect a television ratings bonanza as the two sides test each other out over the course of four quarters with top spot on the ladder up for grabs.