The AFL acted expeditiously against Gold Coast Suns utility Nick Holman for his chase down tackle from behind on Geelong’s Mitch Duncan as he was running down the wing attempting to send the ball long into the Cats’ forward line.

Football fans saw it as a perfect tackle. The MRO panel deemed it dangerous enough to give Holman a two-week suspension. The tackle has now been talked about widely and now the Suns are disputing the suspension which has left football fans asking: what did Holman do wrong?

The tackle itself was not the problem. Holman executed almost the perfect move on Duncan. There was no sling. No dump. One arm was free. The tackle wasn’t vicious, and how could it be: both Duncan and Holman were both running in the same direction at full tilt.

The other consideration was that Duncan was in the act of kicking the ball when he got tackled which compromised his balance. The unfortunate part was Duncan’s head hit the turf and as a result was concussed and had to exit the game.

Ever since CTE has reached public discourse, the AFL has been fixated on governing the game in a way that prevents players damaging their heads. We’ve seen changes to rules that has curbed players charging head first into packs. The sling tackle is a no-go.

Head-high bumps with intent to cause harm are met with suspension. Any direct contact to the head is something the AFL is constantly assessing and it is an evolving area of the game.

Football fans understand this to a point. But what Holman did on the weekend doesn’t meet any criteria of a rash act solely to cause damage to the head because it simply wasn’t. Here’s a question: If Duncan didn’t get concussed, would we be talking about the tackle? 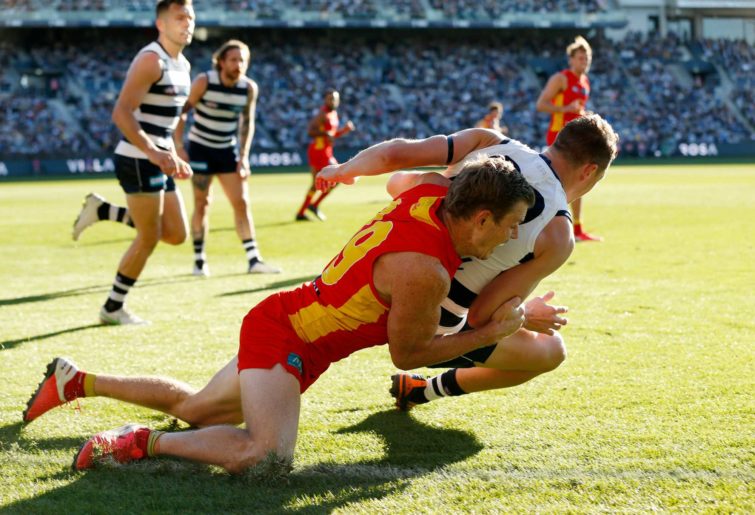 The Holman tackle has the whole football world talking. Most think it’s simply outrageous that Holman could serve two weeks for his otherwise flawless tackle. Some are confused about what makes a good tackle.

“Ill intentions don’t seem to matter anymore, it’s all about the result of the tackle. Complete garbage criteria,” said one football fan on Twitter.

David King said, “It’s unfortunate (Mitch Duncan) hit his head but there’s no way Nick Holman designed that tackle to be a sling, a slam.”

One fan said: “The Nick Holman suspension is the reason I find it harder and harder to love AFL footy. The way the game is governed is ridiculous.”

SEN’s Gerard Whateley couldn’t fathom how the AFL deemed his tackle suspension-worthy: “I do not understand how the AFL football department, who are entrusted to run the game, set the standards and enforce the laws, could possibly in any reasonable way of thinking regard that as a dangerous tackle.”

And Mitch Robinson said, “Surely we aren’t going to accept Nick Holman’s tackle as a two-week ban? That is a perfect chase from behind tackle, nothing ill towards his actions at all! Duncan was concussed, that’s unfortunate but it’s a risk we take playing a contact sport.”

The fallout from this decision to suspend Holman could be dangerous. Players would start to question what they can and can’t do on the field. Instead of a tackle, players would opt to corral more often than not for fear of someone potentially hitting their head on the ground.

It would prevent players attacking the ball and trying to win the ball. In Holman’s case, what other alternatives did he have? The other option for Holman was to chase and apply perceived pressure which would have resulted in Duncan kicking the ball into attack without a finger laid on him. That is not the football that we know and love.

What’s obvious here is that the AFL have reacted to Duncan’s concussion and not the tackle itself. Tackling is a big feature of the game. It’s part of why we love watching football. But there’s a clear distinction we have to make: what Holman did was an accident.

There was nothing impulsive about it. If you look at other parts of the game there are far more treacherous acts like flying on someone’s back for a pack mark where players get their knee up on opponents heads. Even in the contest players clash heads.

Errant elbows sometimes catch part or all of the head in traffic. It’s all part of playing a contact sport. These accidentals will happen.

As much as the AFL can try to legislate head knocks and try to protect a player’s head from serious damage, it is impossible to stop everything without taking away parts of the game that bring football fans joy.

The general consensus is that the Holman case will get thrown out as it should. There are lingering concerns that this could be a new trend by the MRO where they are targeting all head knocks regardless of how accidental they might look.

In Holman’s case there’s nothing he could have done differently to avoid Duncan’s head hitting the ground. He did everything right. It was a clean wrap around the waist.

But if players have to start to second guess themselves in that situation then football fans will start to fall out of love with the game.