What to look for when the hope disappears so quickly

There’s no two ways about it, that didn’t go well for the Australian sides on the weekend.

In many ways – so many ways, in fact – the Round 2 whitewash was harder to take than the on the opening weekend of Super Rugby Trans-Tasman. In Round 1, we had a couple of finalists thrown straight back on the horse, and a couple of teams who hadn’t played for more than a fortnight. One of them lost two coaches along the way.

After the first week, even with recalibrated expectations of what Trans-Tasman success might look like, there was still a feeling that the Australian sides would make the necessary adjustments.

The Queensland Reds would bin the midfield bomb from way too deep on their side of midfield. The Brumbies defence against the Crusaders would aid a breakdown presence that could slow the Chiefs down. The Western Force would have to start firing shots in attack when camped down the opposition end.

As it stands right now, and with most of us on the same page in thinking that four wins will be minimum standard to finish in the top two, we probably now have to contend with the very real possibility that an undefeated run through the five rounds may not be enough on its own.

As Geoff Parkes so rightly put it yesterday, bonus points for the Kiwi sides from here on are going to be like gold; any bonus point you can accrue that the neighbours miss out on will be worth double.

What then for Australian viewers from here?

These are going to be the future foundations from which a Trans-Tasman win will come. And they are out there, they’re just a bit hard to spot at the moment, particularly if all you’re hearing is updates on how bad things are.

It was really encouraging to note a few little green shoots in the Waratahs, for example.

The difference Jake Gordon has made to that side since his return from injury couldn’t be more stark, and it seems to be his sniping in traffic that is providing the go-forward for NSW to play from. 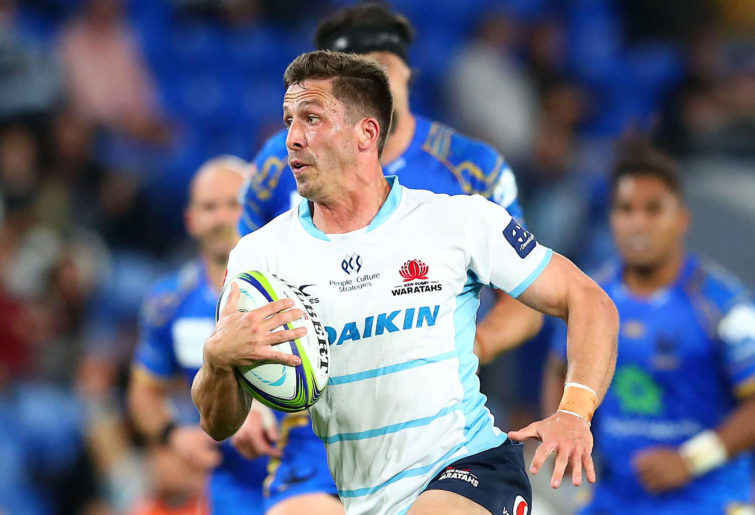 Clearly, that’s unsustainable in the long run, but it’s interesting to observe Gordon’s impact on the playing group.

He’s beating defenders regularly, consistently making the gain line, and that confidence around the field is certainly helping his scrummaging, too. His two tries in two weeks have both come from sheer determination to get to the line.

On the opposite side of the front row, Harry Johnson-Holmes is relishing the lift in intensity in the tight stuff, throwing himself into everything, and emerging genuinely annoyed when he’s picked out as being responsible for any kind of infringement.

All front rowers look annoyed, obviously, but ‘HJH’s’ annoyance looks to be coming from a place of effort, of knowing he needs to hit this one ruck right in front of him because it might make a difference for a play in five phases’ time.

He’s playing like he cares, and Bell is too. I’m not sure that’s always been evident in the Waratahs of 2021.

And they’re showing they’re capable of building phases as a ball-carrying unit. They’re hitting the cleanout, presenting the clean ball which in turn gives Gordon the opportunities he’s taking to find sneaky metres around the fringes.

Ben Donaldson, too, has proved to be a more-than-useful straightening influence when the Waratahs have looked to go wide, when they were certainly guilty of playing too laterally during Super Rugby AU.

There’s still a lot the Waratahs can improve on, of course there is. They still missed 26 tackles against the Blues in Auckland after missing well over 30 in the game of two-handed touch against the Hurricanes in Sydney the week before. They still conceded three times as many turnovers at Eden Park as they won.

But there’s some signs there. Signs are at least something, in the face of absent results.

If you didn’t watch the Crusaders thoroughly dismantle the Queensland Reds and just glanced over the stats sheet, what might stand out to you is that there aren’t too many details that highlight how one way the contest was.

The Reds won similar numbers of lineouts and scrums, kicked less and conceded fewer penalties, even made and missed similar numbers of tackles. They carried slightly less and didn’t beat as many defenders, but the Crusaders did hold a slight edge in possession split.

The game was even played mostly up the Crusaders end, so there had to be a discrepancy somewhere.

And the territory split is the hint: The Crusaders’ metres carried stat was 67 per cent more than that of Queensland’s. Offloads were on par, but the Crusaders threw 53 per cent more passes than the Reds, and made 18 clean breaks to five.

Clearly – and this is something all the Australian sides are being quickly reminded about – the Crusaders have no qualms at being kept down in their half. They were happy to play from their side of halfway, but they also recognised where the space was and shifted the ball there.

More than three times as many clean breaks tells you the Crusaders took advantage of broken Reds defensive lines with regularity.

Queensland might have reason to think they didn’t do much wrong in this game, and plenty of stats show that they matched the Crusaders pretty evenly. 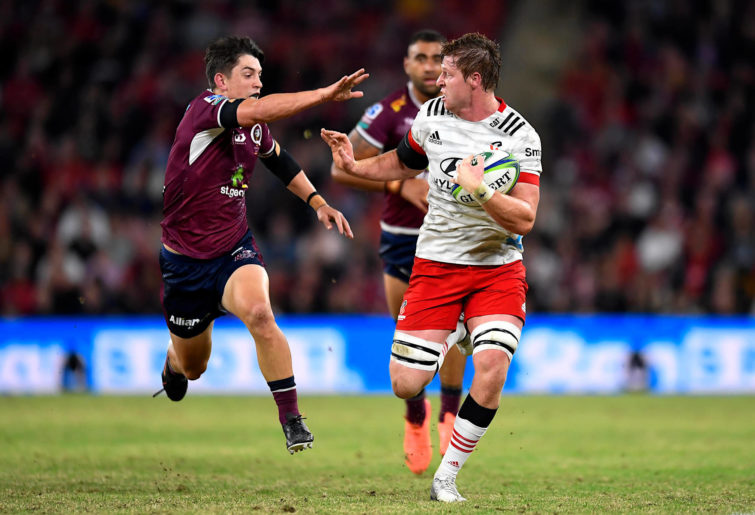 Cullen Grace of the Crusaders runs with the ball. (Photo by Albert Perez/Getty Images)

But the big lesson of Saturday night – and of the scoreboard – is that if you’re slightly out in the wrong couple of lines on the stats sheets, you’re still in for a rough time against the New Zealand sides.

The Brumbies didn’t have a great time of it in Hamilton, but the Nick Frost star continues to rise. He was a something of a shock inclusion in the no.6 jersey for the AU Final and proved to be surprisingly effective in the wide channels, getting his nose through the gain line quite often. His lineout work has been great all season.

After getting some chances off the bench last season, it feels like he’s leaping forward in his progression. And the Brumbies clearly agree, they extended him through to the end of 2022 just last week.

The tally doesn’t make for good reading at the moment, and only wins will change that. But there are slivers there to find if you’ll take the time to look.

And at the moment, we’ve got to look deeper than the scoreboard, because that’s all we’ve got to work with. You can bet the five coaches are doing exactly that, and you can throw Dave Rennie and his Wallabies assistants in there as well.

These are a few things I’ve noticed. I’d be interested to hear what else you’re seeing out there.