Is there a way, way back for Australian rugby?

How do you respond to a challenge? Do you embrace it, accept your shortcomings without flinching and look for improvements? Or do you shrink back into the corner of the room, and resolve to play with your own ball in your own space?

That is the question Australian rugby has to answer now, after going 0-10 in the first two rounds of Super Rugby Trans-Tasman.

Queensland head coach Brad Thorn had the answer spot on after the game:

“I’ve said all year we need to play the New Zealanders if you want to get better.

“Tonight, you get a punch in the face, but you sit in the locker room afterwards and think, ‘that’s it, that’s where we want to be’.

“But there’s a team that’s far superior tonight and you’ve got to wear that – welcome to world-class, now you’ve got to get in the ring with them.”

It has been a huge wake-up call for Australia. After the temporary uplift of the domestic competition, the top two teams in Australian rugby – the Reds and Brumbies – have lost their opening games by a combined average score of 24 points to 44.

It is the second of those two numbers that is the most concerning, at least in the short term. All of the Australian sides have shown they can score points on their Aotearoa opponents, but once they start to leak tries, they cannot a stop an ooze turning into a flood.

As Reds’ captain Liam Wright commented ruefully after the nine-try debacle at the Suncorp, “Everything we did wrong was punished.” In a nutshell, the Australian teams have yet to fully comprehend what works against New Zealand opposition, and what doesn’t. It is a process.

It is no coincidence that the team which has posted the most respectable results in the two rounds so far, and the only one to threaten to beat a New Zealand opponent (the Force) is also the side which takes care of the ball better, for longer periods of the game.

The mission statement of the Australian teams for the remaining three rounds of the regular competition should be ‘nothing for free’. Do not give the teams from Aotearoa any easy points, make them work for every single score they get. Be mean and make it hurt. Appoint Australian referees to oversee matches played in Australia. That is the most fundamental of base-lines.

On Saturday at Suncorp Stadium, the Reds failed completely in this basic aim. They were 21-0 down after only 15 minutes, and 28-0 down after half an hour. The fate of the game was already decided by then.

Let’s do a little statistical accounting. What did those points cost the Crusaders?

That’s right, the first four tries each cost the Crusaders, on average, only four passes (including offloads) and less than one ruck-per-try to convert into seven-pointers. Nice work, if you can get it.

The Reds’ presence in the game improved as those stats got slightly better.

For their final try of the game, the men from Christchurch at least had to make 18 passes, two offloads and build five rucks. They had to work hard for it.

That could not be said earlier in the game. The tone was set as early as the fifth minute of the match.

Perhaps mindful of their problems exiting from deep positions against the Highlanders, Queensland try to run the ball out of their own 22 from a scrum. Perhaps they noticed that Richie Mo’unga was defending in the 13 channel and believed it was a weakness they could exploit. 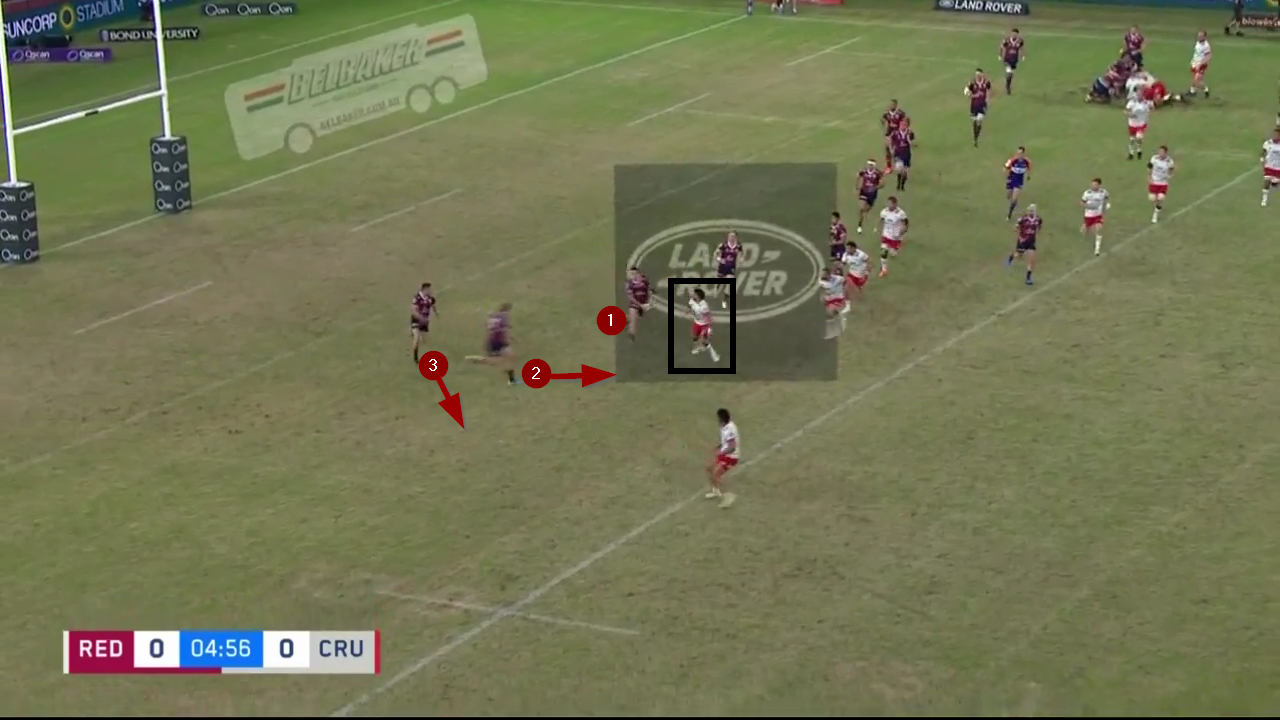 With Mo’unga already turning his shoulders out and anticipating the pass to Bryce Hegarty, the better option for Jock Campbell was either to keep the ball himself, or pass to James O’Connor on the outside.

Instead, after a loose first ruck Mo’unga is able to grab the fumble and run it back under the sticks untouched. No passes, no offloads, no rucks. Just one turnover, one try.

Five minutes later, Queensland gave the ball away with a loose kick. After the first ruck on the return, the situation looked like this. 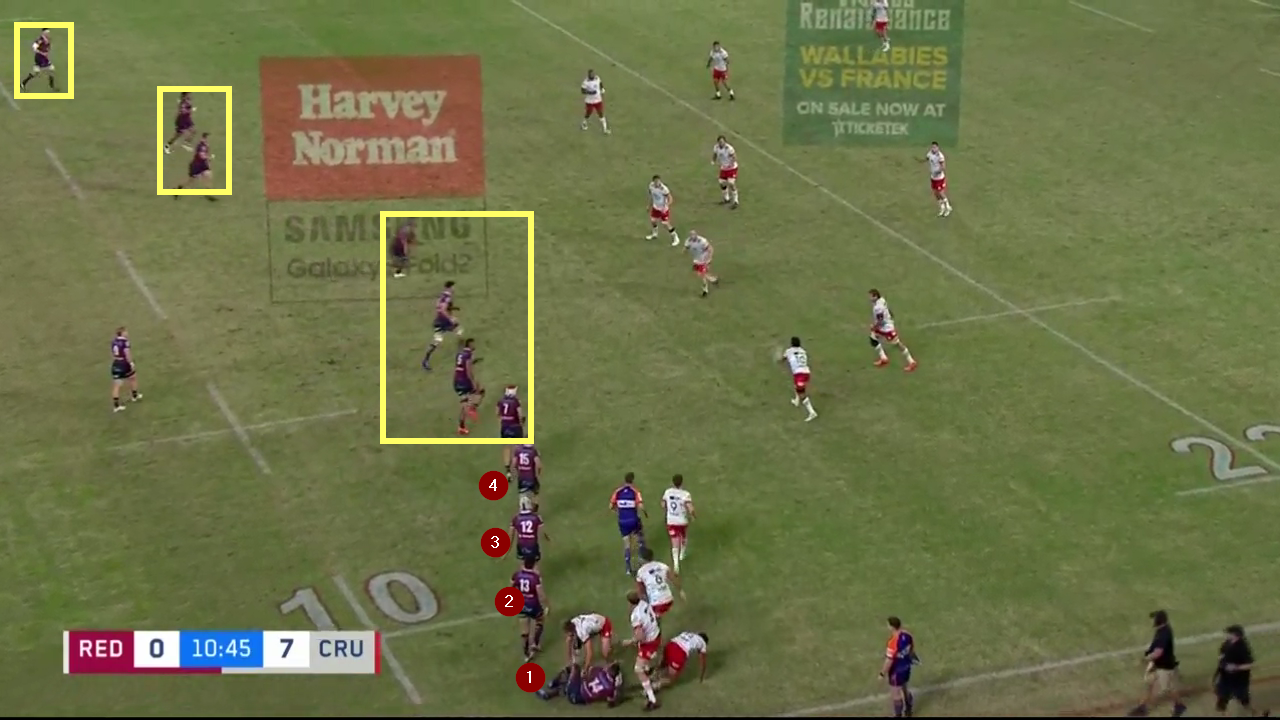 This is why teams from New Zealand actively look for kick or turnover returns, and are prepared to run them back from all parts of the field. The numbered defenders are all backs, bunched in a ten-metre zone close to the right side-line. The yellow rectangles all contain forwards, strung out in dribs and drabs across the width of the pitch.

The Crusaders meanwhile, are already close to their ideal return shape, with a pod of forwards set up outside Mo’unga and David Havili sitting in behind as a second play-maker.

One ruck later, a clear opportunity presented itself. 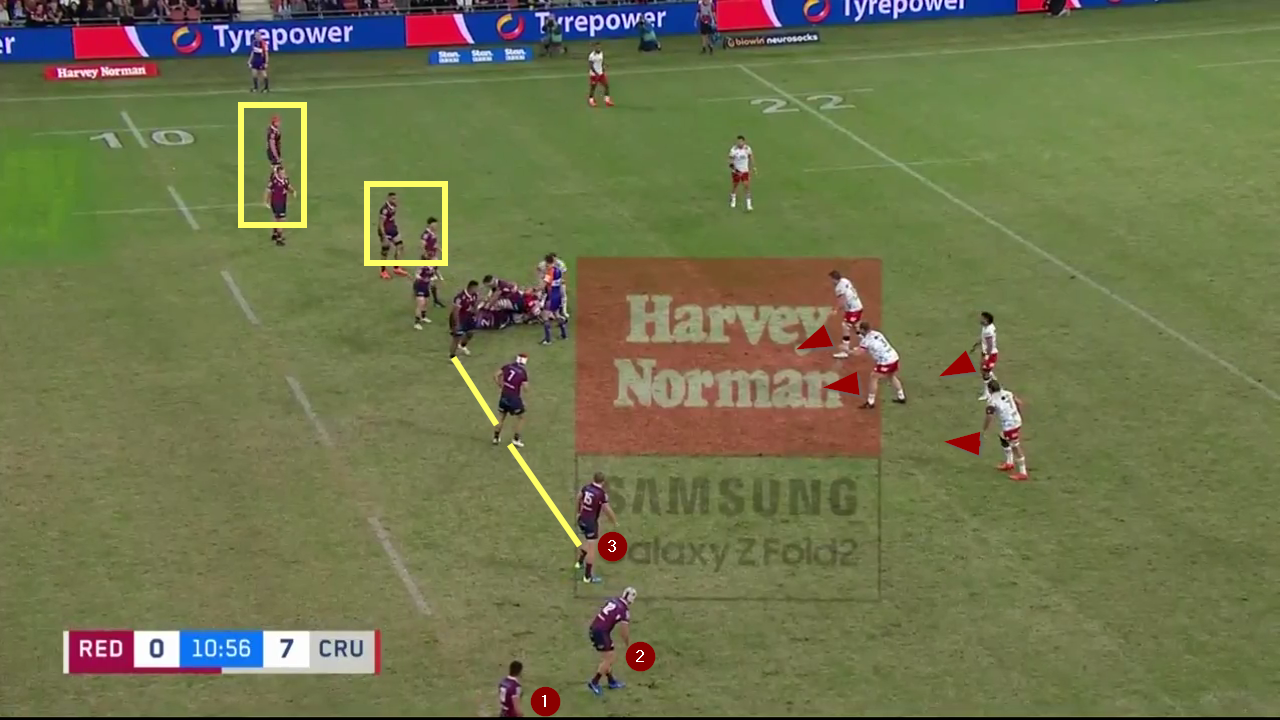 The backs are still on the right, and the forwards are still broken up into pockets from midfield out to the other side. The line spacings between Taniela Tupou and Fraser McReight, and McReight and Hegarty are far too wide.

As Richie Mo’unga explained after the game: “We knew there would be plenty of opportunities. It was about picking them apart through the middle and playing eyes-up footy.”

Ethan Blackadder is able to offload easily over the top of Hegarty’s low tackle and Mo’unga does the rest, connecting with Sevu Reece with a beautiful long pass off his left hand. Six passes, one offload, two rucks, two tries.

The third try arrived only three minutes later, off another turnover, this time by interception.

With Tate McDermott’s relatively short delivery from the base, there is never any doubt about where the pass is going, and David Havili is able to get a clean jump on the ball. When tackled, he doesn’t wait for cleanout support to arrive, he gets up and plays the ball himself.

The next phase echoed Mo’unga’s comment about the Crusaders ‘picking them apart through the middle’. 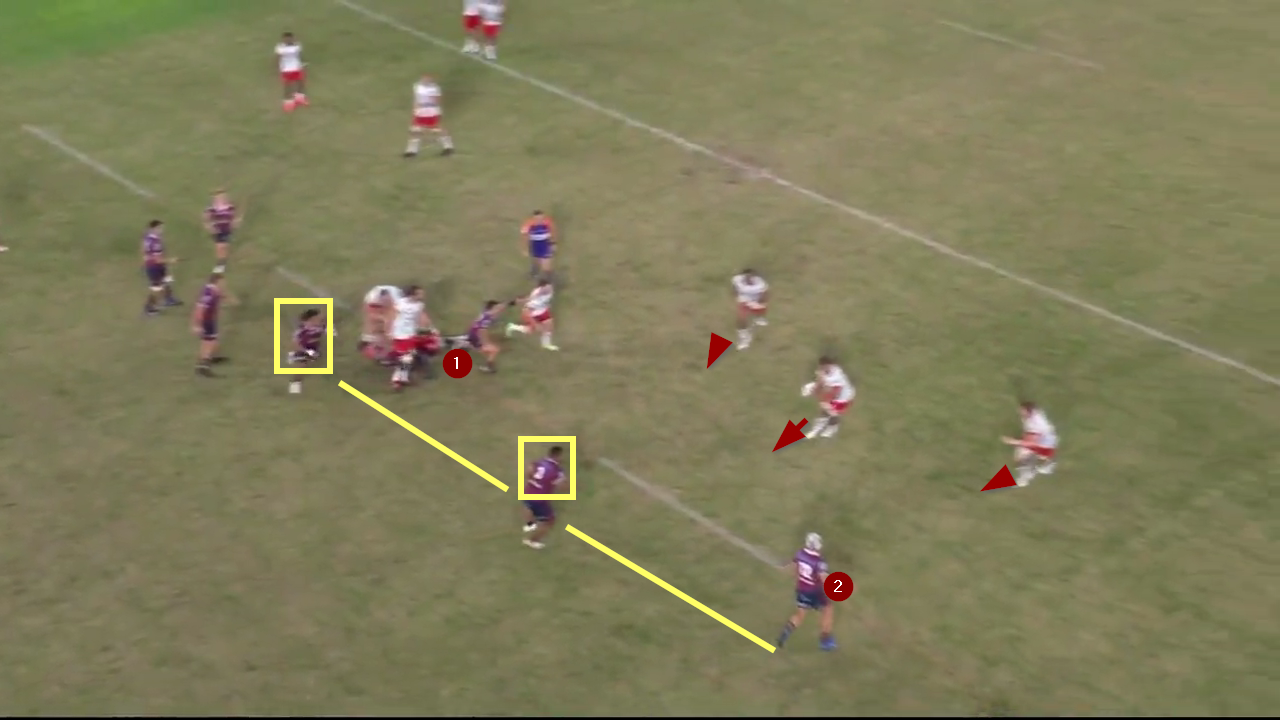 There is the same uneasy mix of forwards and backs in overly wide spacings, and the Crusaders forward offload their way through the gaps. The running total so far: seven passes, three offloads, three rucks, three tries.

The Reds had problems with yawning disconnects between backs and forwards, and tight forwards with loose forwards, throughout the game.

It’s nothing more than straight running and well-timed passing from a scrum, but nonetheless it moves the Crusaders all the way from one 22-metre line to the other. Now look at the situation at the first ruck. 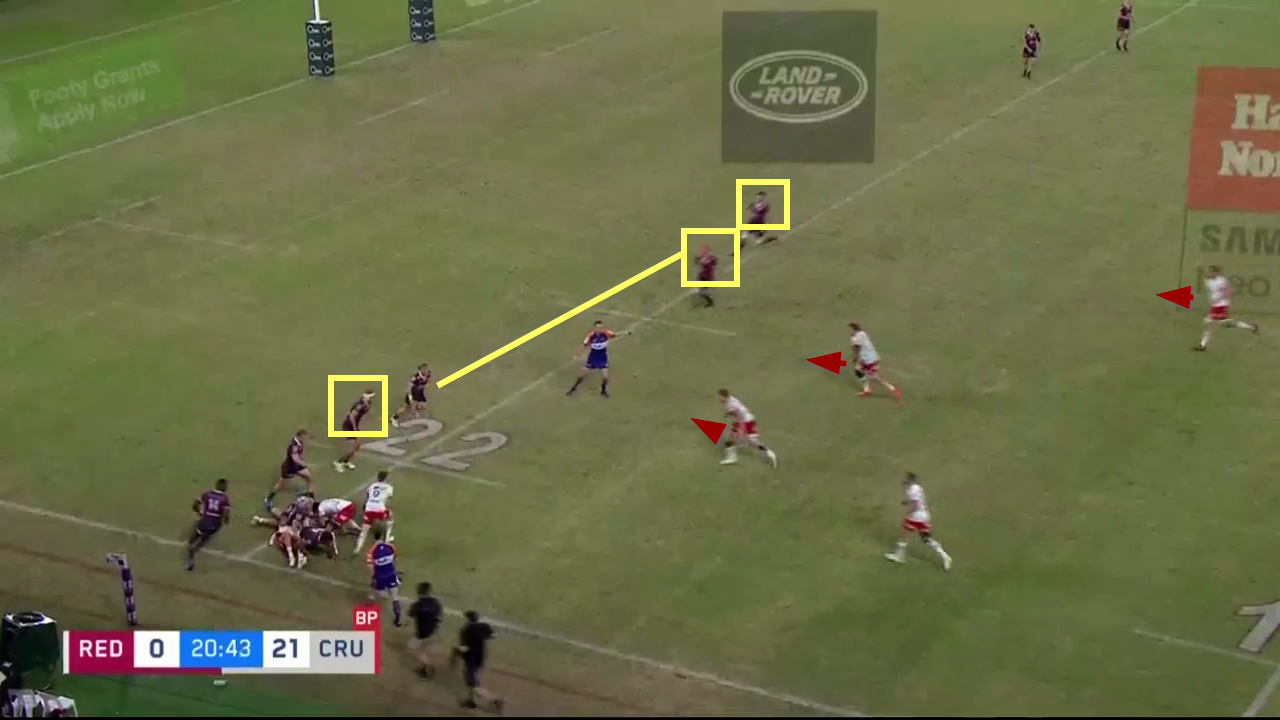 All of the Reds’ back-rowers (McReight, Harry Wilson and Liam Wright) are back in the line, but there is still a huge gap between McDermott and Wilson, and there is no Queensland tight forward in sight.

Both of the Crusaders’ second rows are already very much in play.

The impression that the Queensland back row was being over-worked was confirmed in another scoring sequence in the second half.

Fraser McReight has a dig at the first ruck, and then counter-rucks at the second, but he still the only defender offering to fill in at guard when Mo’unga makes another scoring break on third phase. 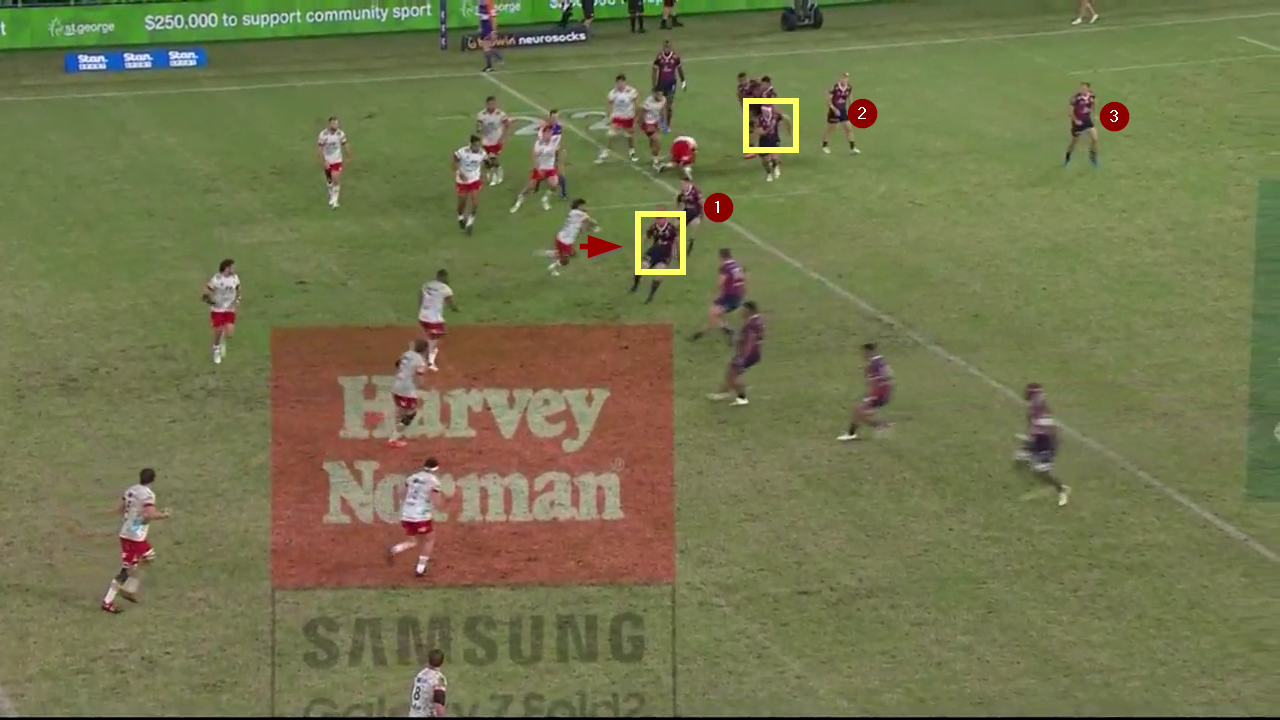 Unfortunately for Queensland, the same pictures were repeated far too often for their own peace of mind.

Perhaps the biggest irony of the game unfolded late in the second period, when the Reds began to realise they were eminently capable of giving the Crusaders a dose of their own medicine.

Harry Wilson scored one outstanding try from a kick return, then created another for Suliasi Vunivalu from a turnover.

The Queensland Reds found themselves way, way back on the scoreboard after only 15 minutes of the ‘Super Bowl at Suncorp’ – and that was all she said. You cannot spot a champion team like the Crusaders a 21-point lead and expect to get a positive result, even on your own patch.

It is clear the Reds are still very much in the middle of the process of adjustment to opponents from New Zealand. They are finding that process much harder than teams like the Force, who are better able keep the ball for longer periods. They are still giving their opposition too much free ball, of the type they enjoy the most.

Brad Thorn was quite right when he said after the game: ”We need to play these guys, we want to play them, and we want to win. But there’s a team that’s far superior tonight and you’ve got to wear that – welcome to world-class, now you’ve got to get in the ring with them.”

It is not the time for Australia to play the shrinking violet and retire from the fight altogether, and back away into a purely domestic competition. That would be very un-Australian. It is time for them to pick up the gauntlet.

The Force have shown the way in that respect. Despite their modest talent base, they have been very competitive in the first two rounds. It is time for the Australian franchises to stop playing the game by New Zealand rules – and incidentally, stop appointing Kiwi refs for their own home games.

This is war, and you do not win wars by volunteering to fight on your antagonist’s ground, and by donating ammo for free.