I have rarely, if ever, seen such a good team as the 2021 Penrith Panthers.

They are a thing of beauty and wonder. Not only do they have no weaknesses I can see, they have strengths everywhere, and they have depth.

James Fisher-Harris is now the best prop in the game. I don’t think there is any dispute.

Jerome Luai is excitement personified and he has a killer determination unmatched by any of the other NRL halves right now.

Dylan Edwards is a superb and reliable fullback, who is being deputised for brilliantly by Stephen Crichton, who himself must be in the top five centres right now.

Throw in Matt Burton’s utter brilliance, Charlie Staines speed and Brian To’o’s incredible work rate and ethic and they have every other side wondering just how they can be beaten.

And then there is Nathan Cleary.

In a team of stars, this bloke is a superstar.

He is just 23 years old and he plays with the head of a 30-year-old veteran of multiple premiership and Origin series wins.

He not only has all of the skills – a sublime kicking and passing game, superb organisation, unbelievable ball running, and defence more akin to a second rower – he absolutely knows this is his time. This is his team’s time.

In all of those other sides I’ve listed, they all had a Nathan Cleary. I put him right up there with Peter Sterling, Steve Mortimer, Greg Alexander, Ricky Stuart, Alfie Langer and Cooper Cronk. With hopefully ten years left in his career, he may even eclipse those names.

With Cleary at the helm of this brilliant team, only misfortune, and possibly a full-strength Melbourne Storm, can stop them.

However, both of those things can happen.

Their run of 11 straight wins to open season 2021 will almost certainly extend to 12 this weekend with them meeting the 16th-placed Bulldogs. That will have them equal second in regard to best starts to a season ever.

Only the 1995 Manly-Warringah Sea Eagles have ever had a better run to start a season, with 15 straight wins.

However, that is where the first warning comes for the Panthers.

While that Sea Eagles team made the grand final in 1995, they were rolled by a Terry Lamb-led Bulldogs side who, after a horror start to the year brought on by a massive split in the squad caused by the Super League war, came home with a wet sail.

Coming from sixth place, they defeated both the Dragons and Broncos in the first two weeks of the finals before defeating both the Raiders and Sea Eagles in consecutive weeks, both of whom only lost three games each in total that year.

Falling at the final hurdle can happen. Three of the seven sides in the above table did not taste premiership glory in those seasons.

So a good start is no guarantee at all of a good ending to a season. Just ask Nathan’s dad, Ivan.

In 1996, Cleary senior was the goal-kicking centre at the Roosters. With Gus Gould holding the clipboard and Brad Fittler at the helm, they won their first ten games straight to be in outright first place.

They then lost six of their final 12 games and, while they still finished in the top four, they went out in straight sets in the finals.

Don’t tell me that Ivan doesn’t remember that with pain. He’ll be very aware how quickly things can go wrong and he’ll have learnings that will help his 2021 charges avoid the same fate.

He’ll be making sure that this magnificent team does not lose focus and that there are plenty of contingencies in place should misfortune strike.

He’ll also be ensuring his boys don’t get complacent.

Only seven times in the 23 seasons to date (30 per cent) of the NRL has the side that got off to the best start even made the grand final. However, in five of those seven instances, that side won the decider.

Clearly will also be all too aware that although having a really dominant season usually assures a team of at least making the preliminary finals, it is no guarantee of premiership victory.

As you can see in this table, only one side – the 2009 Dragons – have finished the home-and-away season in first place and not gone on to play in at least a preliminary final.

However – as the Panthers themselves found out in the worst way possible last season – that top-of-the-table finish has only materialised into grand final victory 35 per cent of the time. 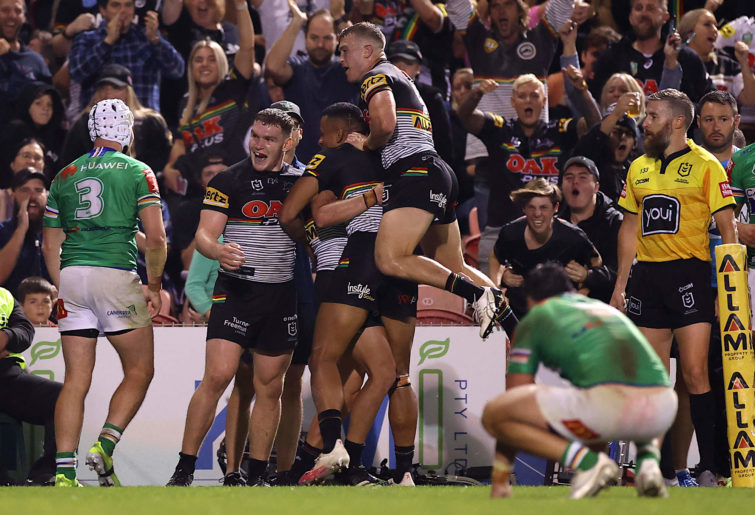 Should the Panthers win both their Round 16 clash with the Eels and their Round 20 match against the Storm, they will almost certainly win the minor premiership. If they do that, the odds are extremely good that they will make the decider.

The good news for the Panthers faithful is that sides backing up for consecutive deciders are more likely to win.

However, the 1991 Panthers, the 1996 Sea Eagles, the 2007 Storm, the 2008 Sea Eagles and the 2017 Storm all reversed the result from the previous season and that should all give the Panthers fans lots of hope.

So the last real risk that the Panthers have is injury striking down Cleary.

In the best teams I’ve ever seen I listed above, I included the 1993 Canberra Raiders.

Of that great era for the Canberra side, it is not the 1989, 1990 or 1994 Premiership sides I thought were the best. It was the ’93 Raiders. However, in reality they relied on one player far too much to really be called a great team.

After an indifferent start to the season, they really hit their straps. Between Round 7 and Round 21, they won all but two games, scoring 472 points while only conceding 172 – an average score of 31-11. Their attack was deadly and peerless.

It was led by that year’s Dally M Medallist in Ricky Stuart. It was his best ever season.

He was so good that all his Green Machine had to do was follow his lead. And follow they did.

The likes of superstars Mal Meninga, Gary Belcher, Brad Clyde, Steve Walters and Laurie Daley just hooked in behind their brilliant No.7. Stuart organised the defence brilliantly and ran all of the attacking plays.

And then it all went pear-shaped.

While making a meaningless covering tackle at home against the Eels, whom they were leading by over 40 points at that stage, Stuart snapped his ankle.

The Raiders – with all of that star power – lost the next three games by a combined score of 93-30, exiting the finals without so much as a whimper.

It is that horror story that the Panthers should be most afraid of.

While I’m sure that, should Nathan Cleary go down, the Panthers will not surrender so meekly, one of their biggest risks is relying too much on the son of Ivan.

There is every reason now for every fan west of the M7 to really anticipate glory this season and really only disaster – or the bloody Melbourne Storm – can stop the Panther faithful celebrating like it’s 1991 come October this year.