Mary Konstantopoulos
Expert
27th May, 2021
1
Join the conversation
Advertisement
Write for The Roar

After playing her first season in the WNBL back in 2008-09 for the AIS team, she has played for a number of clubs, including the Bendigo Spirit and the Melbourne Boomers.

Madgen has also had the opportunity to represent her country. She made her international debut in 2008 with the Australian junior team and in 2011 was named as part of the Australian Opals squad. Since then she has played in FIBA Oceania Championships, Olympic qualification series and Four Nations tournament.

But to date Madgen has not had the opportunity to represent her country at an Olympic Games. That all changed this week when Madgen was named as part of the Opals squad for Tokyo.

“This is a dream come true,” says Madgen. “I was in shock for sure, but it’s the first time I have let myself feel super proud of myself, and it was a good time to reflect on everything I have done to get to this point.

“I really let myself be proud of myself for the day, and then I got straight back to work.”

For a woman that has achieved so much in women’s basketball, it may come as a shock that Madgen does not take the time more regularly to celebrate her incredible achievements in the game.

But she’s always looking forward and not backwards, with her focus being on becoming the best player she can be both on and off the court.

“As a professional sportsperson, and I am very highly competitive, I am always looking to be the best version of myself both on and off the court, and I think that helped me get into the team, because I am always trying to expand my game and improve myself,” says Madgen.

“I hadn’t made an Olympic team, and that was the one thing I wanted to tick off during my career that I hadn’t done yet.”

In the lead-up to Tokyo, focusing on that goal involved Madgen making a commitment that she would do her absolute best to make the Olympic squad. 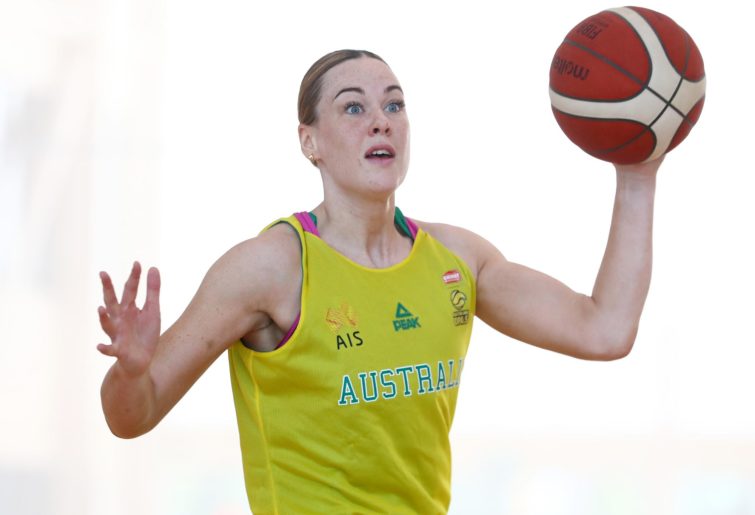 Setting goals can be confronting for so many people. It can be challenging to set yourself a difficult goal because of fear of failure. But for Madgen it was all about doing as much as she could so that she could be proud of herself no matter the outcome.

“I left no stone unturned to try and make this team,” she says. “No matter if I made the team or not, I didn’t want to be disappointed in myself and thinking that there was more that I could have done.

“I gave it everything and I wasn’t afraid to tell people that I was giving it my all.”

It comes as no surprise that Madgen describes herself as competitive. She is one of four children. Her brother Ben Madgen has played basketball for the South East Melbourne Phoenix and her brother Jack has also played for the Collingwood Magpies.

Madgen recalls plenty of sport during her childhood and plenty of time on the court playing against her brother.

“The competitiveness in the backyard after school has driven us to all be hard workers and competitive athletes,” she says. “Usually one of us would end up in tears and run back home to complain about what had happened on the court.

“Growing up in the environment that I did, the competitiveness was instilled in us from a young age.”

For Madgen, making the Opals squad for the Olympics is the realisation of a dream. But what makes her selection even more special is that she will get the chance to compete alongside her friend Cayla George.

Madgen and George have known each other since they were 12 and 13 years old respectively. The two began playing together at the same junior club, the Eastern Mavericks.

“It’s pretty amazing, really. It’s a bit surreal,” Madgen says. “No-one would have thought we would be going to an Olympic Games together 20 years later.

“Growing up together and playing together for so long, our parents are great friends too so it’s extremely special.”

From here Madgen’s focus is on being as prepared as possible for Tokyo. While the recent lockdowns in Melbourne have thrown a spanner in the works, Madgen is confident she will be able to train alongside her teammates shortly ahead of a tour to the United States. There the Opals will play a Four Nations tournament.