Despite the potential season disruptions heading into Round 11, the AFL is now gearing up for Wednesday’s mid-season rookie draft in lockdown.

Unfortunately, the VFL’s Round 7 was unable to go ahead, robbing those players of a final audition, although enough of a sample has been laid down for clubs to be able to finalise their draft boards and speak with players and managers ahead of the draft.

Although the draft order is sorted by reverse ladder position, the players in the draft  must agree to contractual terms before being drafted, especially in cases where players are being asked by interstate clubs to uproot their lives for just six months and in doing so risk being delisted and waiting to be picked up in the national draft.

The mid-season rookie draft is no millionaire’s draft, however, draftees will be paid $50,000 for a five-month contract unless they negotiate longer terms with higher pay, but should they be delisted and fail to get onto another list before the 2022 season they will get a further $20,000 compensation.

Furthermore, players drafted interstate will also be eligible to claim relocation costs and some family flights, while state league clubs get a cool $10,000 compensation for losing a player and in some cases the player in question will be released for finals.

Ultimately, though the final draft order will be determined by how many picks clubs nominate, there are currently only three clubs that do not have list space available with the ladder-leading Western Bulldogs, losing grand finalists Geelong, plus seventh-placed West Coast not in the draft at this stage.

Of course, there are several clubs that planned for this eventuality by leaving rookie spots open on their lists, while other clubs have had players go onto the long-term injury list having been determined to be unfit to return in 2021.

Retirements and disciplinary delistings have also opened space for clubs, and as predicted Fremantle now have two players out for the season, while GWS and Richmond have each sustained season-ending injuries.

The Bulldogs and the Cats have no season-ending injuries, however, they have one game before the draft to determine if they are to enter at the last minute, while West Coast look more and more likely to act on Daniel Venables, who continues to suffer concussion symptoms.

Clubs have until Tuesday to confirm their final selections, which currently only stands at 18, so this is the starting order based on ladder position after Round 10 with all 30 potential picks. Unlike the first mock, this is a prediction of which clubs will pick which players and where.

Pick 1 North Melbourne – Jackson Callow
The Kangaroos traded away their big forward in the off-season and drafted midfielders instead of talls, so here they must take a developing forward to add to their young group. Yet rather than add a greenhorn ruck, they need to land a ready-made key forward. The Tasmanian connection doesn’t hurt either.

Pick 2 Hawthorn – Ned Moyle
The rebuilding Hawks can meet a list need and snare a local talent here with the leading ruck prospect from the NAB League. Picking second is a luxury in this stacked mid-season draft.

Pick 3 Collingwood – Jacob Edwards
The early favourite for top pick falls to the Pies here in a draft where talls are projected to occupy the top spots. A ruck/forward is a priceless commodity for a team already boasting solid ruck depth.

Pick 4 Gold Coast – Wylie Buzza
The big Queenslander out of the Lions’ academy is enjoying an injury-free season in the VFL for Werribee after stints at Geelong and Port Adelaide. He is the right age profile for the Suns and fulfils both ruck back-up and tall marking forward option, which are top of the docket on the Suns’ list of needs.

Pick 5 St Kilda – Luke Cleary
The Sandringham half back is an astute pick for the Saints, who will look to bolster their list with young talent, with outstanding ability to read the ball coming inside 50 and rebound in support of teammates.

Pick 6 Adelaide – Oliver Davis
The Tassie kid went undrafted despite being the state’s best prospect, so he can expect to have his named called out by the Crows, who have brought him into their SANFL team.

Pick 7 Carlton – Zavier Maher
The 2020 draft slider landed in Carlton’s newly minted VFL squad and has played himself into being picked with a winning performance for Murray Bushrangers against Nick Daicos’ Chargers.

Pick 8 Essendon – Angus Baker
The Swans’ academy graduate and NEAFL rising star has shown his skills as a ball-winning half back for the Bombers in the VFL in a position where the club lost two stars during the off-season.

Pick 9 Fremantle – Blake Schlensog
Freo’s injury list keeps growing, with tall defenders going down by the handful, so this recruit from South Freo via Geelong’s delistings could plug a hole for the 2021 campaign.

Pick 10 Richmond – Sam Durham
Following a familiar theme, the Tigers will look to snag a talent they’ve developed in their VFL team, especially at a time when their midfield depth is being tested and the next generation are being brought through together.

Pick 11 Greater Western Sydney – Josh Green
Overlooked in his interrupted draft year, the younger brother of Tom is this year outplaying most of his drafted teammates in the Giants’ VFL side, getting plenty of the ball and showing his midfield skills in addition to the forward craft he previously displayed.

Pick 12 Sydney – Paddy McCartin
Despite being suspended, the former number one pick has shown enough that he could be a role player in the Swans’ transitioning forward line. 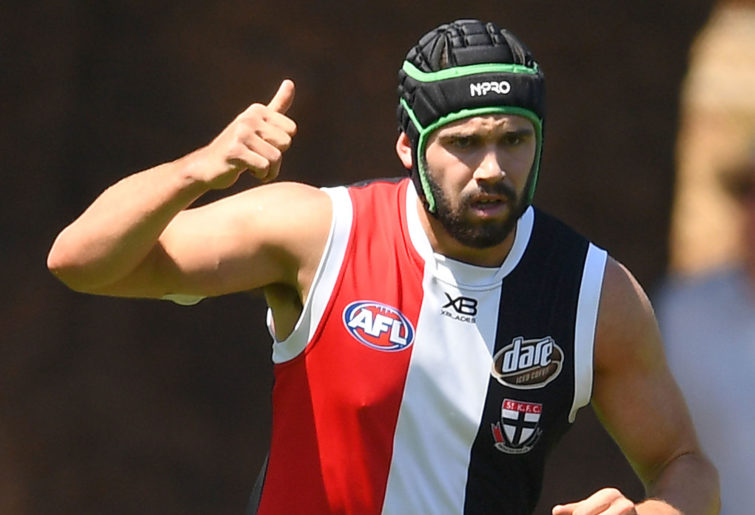 Can Paddy McCartin revive his career in Sydney? (Photo by Quinn Rooney/Getty Images)

Pick 13 Port Adelaide – Riley Knight
Arguably the SANFL’s best player this season, Port are a likely destination where he can press for selection right away. He is one of the ready-to-go prospects.

Pick 14 Brisbane – Bruce Reville
The Lions’ academy product has been right at home with the step up to VFL, blasting five goals in a recent match, showing the kind of X-factor around goals that belongs at AFL level.

Pick 15 Melbourne – Nathan Freeman
The former first-round pick is in irresistible form in the VFL, so much so that a return to the AFL appears to be on the cards despite some initial hesitation on the player’s behalf.

Pick 16 North Melbourne – Max Heath
The developing ruckman will slot in deep behind the top rucks at Arden Street, however, the succession plans need to be made sooner than later as Todd Goldstein isn’t getting younger and won’t be around when North are pushing up the ladder to make finals.

Pick 17 Hawthorn – Jai Newcombe
The Box Hill Hawks have found their senior partners another undrafted talent, but this time Hawthorn need to move to secure the talent cheaply or face losing him later in the year.

Pick 18 Collingwood – Jack Briskey
The Lions’ academy tall defender finds himself behind the group of talls at the Gabba, whereas at Collingwood he could rejoin a group of young developing defenders who he trained with in summer.

Pick 19 Gold Coast – Ash Johnson
They say lightning rarely strikes twice, but things are shaping up for this Halls Creek mature-ager to follow his cousins into the big time, after Shane McAdam and Jy Farrar got their breaks in the AFL through playing amateur footy for Old Scotch.

Pick 20 St Kilda – Cody Raak
The Bulldogs next generation academy luck had to run out eventually, with this young key defender too good to last until the national draft, where he could be had cheaply.

Pick 21 Adelaide – Michael Knoll
This perennial ruckman will get drafted in the mid-season draft for a second time as insurance for Adelaide’s ruck department, possibly remaining available to play for Norwood in the SANFL finals should he not be required at AFL level.

Pick 22 Carlton – Toby Wooller
The former Lions NEAFL captain was starring for Carlton’s VFL side when a back injury disrupted his season, having booted seven goals in three games and taking 26 marks. He fulfils the list needs at the Blues and has shown he is at home at Princes Park.

Pick 23 Fremantle – Tyrone Thorne
The mercurial small forward is ripping it up at Peel with the handful of Dockers players that aren’t on the injury list. Freo could do worse than take a speculator on this local goal sneak.

Pick 24 Melbourne – Cam McLeod
The Demons don’t have to worry about 2021 in this draft, yet the chance to add a medium tall goal kicker to their already impressive depth at the bottom of the second round is too good to pass up.

Pick 25 Gold Coast – Brayden Crossley
The former Suns ruck/forward has been in devastating form this season, wreaking revenge on his erstwhile club in the VFL with 28 touches, 39 hitouts and a pair of goals, thoroughly outpointing his direct opponent, who currently occupies a list spot for the Gold Coast.

Pick 26 St Kilda – Matt Hammelmann
The perennial Queensland goalscoring champion deserves a fresh shot at the big time, with his strong marking and appetite for goals a feature that any AFL club must be paying attention to.

Pick 27 Carlton – Eli Templeton
The former Saint has been one of the revelations of the 2021 VFL season, leading Port Melbourne in disposals and marks to be among the best in the competition.

Pick 28 Melbourne – Noah Gribble
The Geelong Falcon went undrafted, but gets taken here because of his outstanding NAB League form and the simple fact that the Dees can’t expect to get this value at any draft.

Pick 29 Gold Coast – Mitch O’Neill
This double under-18 All Australian from Tasmania had a washout year with West Coast, who made a harsh call to delist him before he even donned the jersey. He is too good to not be on an AFL list and the Suns need more pure gut players like him.

Pick 30 St Kilda – Tyson Stengle
Third chances are hard to come by in the AFL, but St Kilda might give one to Stengle. He is an AFL talent, but questions on his character will determine if he finds an AFL home.