Ed Jackson
30th May, 2021
2
Join the conversation
Advertisement
Write for The Roar

In a scrappy affair, the hosts bounced back from their midweek home loss to Wellington to claim victory, thanks to goals in either half from Bernie Ibini and Bruce Kamau.

It leaves the Wanderers with a slim chance of securing finals football for the first time in four seasons, moving to eighth on the ladder on 34 points, two points behind sixth-placed Macarthur with just one game to play.

“The performance I thought was excellent, especially the first half. We were exceptional in every aspect of the game,” Wanderers coach Carl Robinson said.

“Obviously we were only one goal ahead at halftime which was probably the disappointing thing of a very polished first half.”

The hosts took the lead via a clever right-foot snapshot from outside the box by ex-Socceroo Ibini in the 28th minute, his accurate finish eluding a diving Jamie Young in the Roar goal.

Having put the ball in the back of the net in either half through Kamau and Keanu Baccus only to be denied by a linesman’s flag, Kamau’s 88th-minute strike sealed the win.

Defeat hurts Brisbane’s hopes of a top-four finish and also means they need a positive result against Perth on Wednesday at Moreton Daily Stadium to make sure they secure their position in the finals race.

The Roar huffed and puffed throughout but couldn’t find a way past Wanderers goalkeeper Daniel Margush, who made several good saves including notable efforts to deny Japanese youngster Riku Danzaki and substitute Cyrus Dehmie.

Danzaki had a great chance to equalise in the 86th minute after a cross from Kai Trewin, but he could only hit the ball back from where it came rather than turn it into the net from close range.

“A couple of errors which cost us in the end but that’s the way it goes.

“We have to dust ourselves off and prepare for our two home games which are big matches now.”

Brisbane captain Tom Aldred is a doubt for Wednesday’s clash with the Glory after limping off in the first half, with Moon saying the English defender will have to be assessed over the next two days before a decision on his availability is made.

Western Sydney travel to face fourth-placed Adelaide on Thursday knowing they have to win that game and hope other results go their way to make the finals.

Western Sydney Wanderers attacker Simon Cox is leaving the A-League and returning to the United Kingdom to be reunited with his family. Cox, who stayed in Australia while his partner gave birth to their child in February, has decided to end his 16-month stint with the Wanderers. “I had to make a really tough decision […] 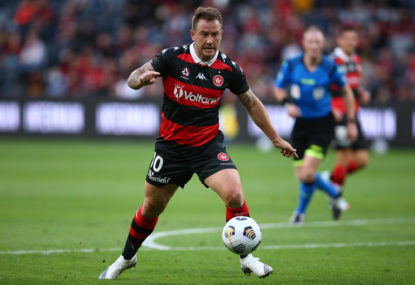