The immediate post-match interview with a soccer manager in the UK is a hot-house of sporting cliches.

In an exciting game, there is “a lot of end-to-end stuff”, if a player has a bad patch he expects “the hair-dryer treatment” after the game. A surprising loss is framed as “there are no easy games at this level”, while an unexpected shift in momentum translates to “it was a game of two halves”.

They even speak in a curious present tense about a past which can no longer be changed – “he’s hit it with his left foot and it’s curled into the top corner”. It is as if they are still reliving the game in an endless, purgatorial loop. As the comedian Michael McIntyre once pointed out, everything happens to football managers “at the end of the day” – even if it happened first thing in the morning.

Whenever you hear the interviewee slip into soccer vernacular, it is the time to switch off. You can kiss any further value to the commentary goodbye after that.

An entirely genuine game of two halves did occur between the Reds and the Chiefs in Saturday’s Trans-Tasman encounter in Townsville. For once, the cliche was spot on.

The Reds won the first half 33-3. The Chiefs won the second just as decisively, 31-7. With 13 or 14 Chiefs on the field the score was 26-3 to Queensland, but with the Mooloo men restored to a full complement it was turned on its head: 14-31 to the visitors.

The basic stats tell the same see-saw story, with the Chiefs subsisting on a beggar’s ration of ball in the first half – sub 30 per cent in both territory and possession – then coming back to dominate the second period and shut the Reds out of the game.

It can be difficult to evaluate games like this. Do you attach more importance to the early lead accumulated against an understrength opponent (“we took our foot off the pedal”), or to the comeback (“we were caught napping at the start”)? Pick your poison.

Although Rugby Australia and the promoters of the Trans-Tasman competition will be letting out a mighty sigh of relief after events in Townsville, Brad Thorn and his Reds will be much more wary after the shine of their first win wears off. Queensland have conceded an average of over 44 points and seven tries per game in their three outings so far – and two of those have been at home. 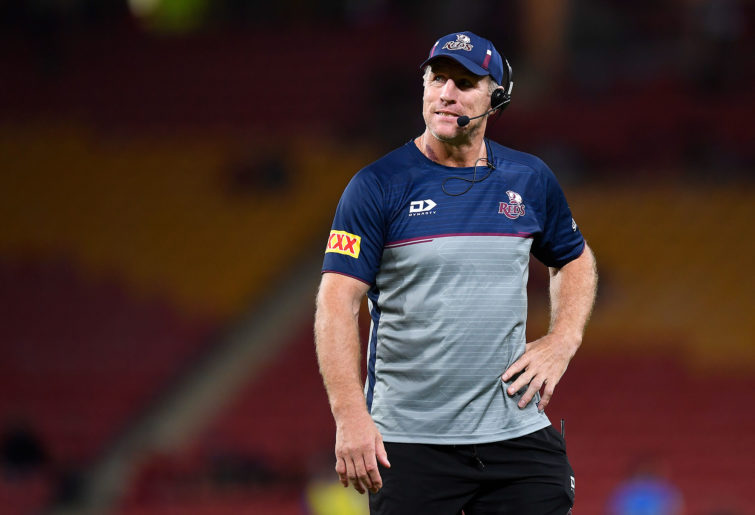 The Reds can certainly find the tryline, but they are unable to stop New Zealand teams scoring against them. Much of the reason for this is Queensland’s dependence on the kicking game: the Reds kicked the ball on 29 occasions in Townsville, 12 times more than their opponents. Despite spending 30 minutes with only 13 or 14 men on the field, the visitors made more runs, passes and offloads than the home team.

The Reds like to scrum, and their tight forwards are built for the job, but they only get an average of five tackles per game out of two positions in the front row, at a completion rate of 57 per cent. This is a big part of the explanation why the emphasis on the kicking game produces uneven results.

The kicking strategy has to be right, but so does the chase. Over the weekend, the Reds started the game accurately on both counts. Their exits were tight:

Harry Wilson cuts a nice angle between two Chiefs forwards to make the initial break all the way up to the 40-metre line, and the Reds immediately insert their primary kicker, Bryce Hegarty, at first receiver to get maximum length on the following kick. No kick return, no scoring comeback.

Queensland held onto this position within the Chiefs’ 22 long enough to create the first try of the game three minutes later. That is what a good exit can do for you.

The Reds continued to kick on their own terms in the first period:

This time a drive straight from the kick-off takes play up towards halfway, and Hegarty is once again the main focus of the kicking game, with a long diagonal giving Suliasi Vunivalu a decent shot at taking man and ball together.

Like their exit strategy, the Reds’ first half chase was good: 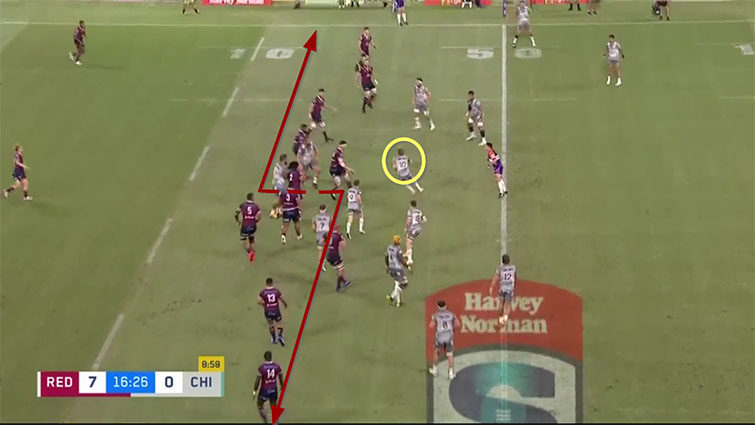 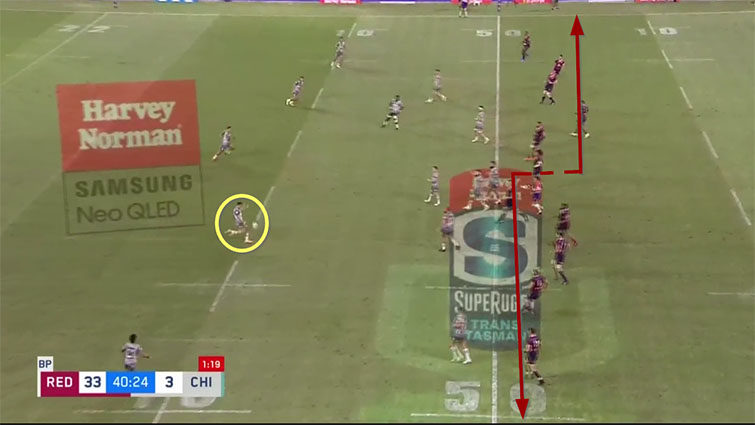 There is excellent connectivity and numbers, with no more than five metres separating the point chase and hindmost defender. That forces a kick back in the second example, and leaves Damian McKenzie with nowhere to go in the first.

The exit strategy was, of course, helped greatly by the absence of two important components of the Chiefs backfield, Chase Tiatia and McKenzie, for half an hour.

Both cards by Nic Berry were brave and fully justified: 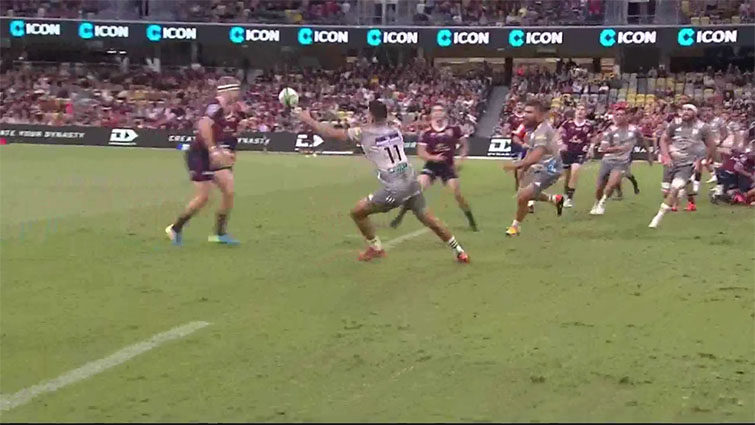 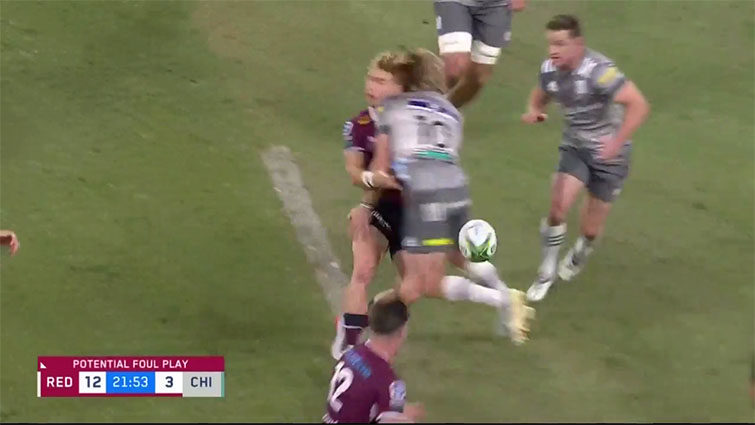 There is no prospect of Chase Tiatia catching the ball on the end of his fingers, so the deliberate knock-on deserves a yellow card. Likewise, McKenzie would have been fully aware of the current refereeing protocol about direct contact to the head in the tackle. He would have known his fate in advance, even if his captain Brad Weber looked shocked. 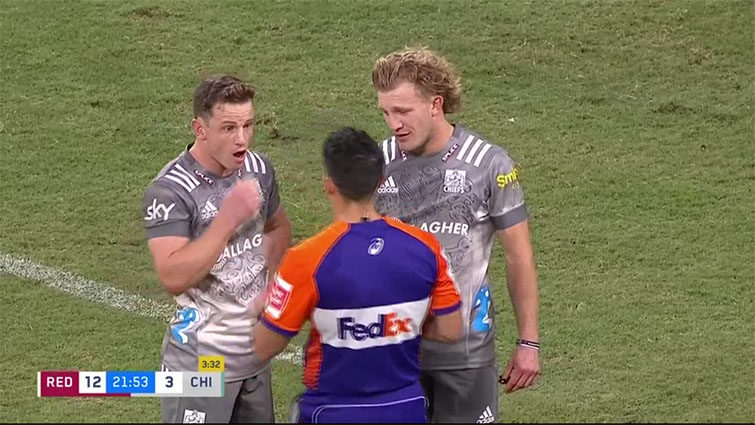 It is a melodramatic cliche of a grimace of which any soccer player would be proud.

Of much greater concern for the Reds was the ease with which their defence was broken down by a Chiefs attack lacking its main creative influence in the second period.

Even with Kaleb Trask as the sole playmaker, they were able to start making demands of the Queensland tight forwards on defence – demands they could not meet: 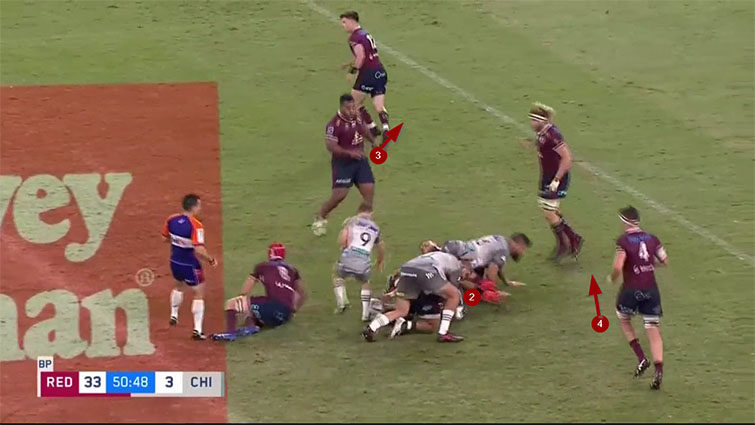 These two phases occurred within the same sequence of play. In both cases, a simple cut-out pass in midfield takes the Queensland tight forwards out of the game.

In the first instance, Brandon Paenga-Amosa falls into the tackle unnecessarily and Taniela Tupou is still struggling to realign when Tiatia makes the mini-break in between him and Isaac Henry. In the second, Harry Wilson runs past both Paenga-Amosa and Dane Zander to (at least) challenge Pita Gus Sowakula in the corner.

Another flat cut-out pass to take out the key defender, Wilson, and leave Zander slow on the wrap-around to the far side; another cut by Tiatia into the inviting space between Henry and Angus Scott-Young. That sets the scene for the try-scoring phase, with only Wilson showing any animation at all in defence.

The final nail occurred only one minute from time:

Luckily for the Reds, it was just a nail on which to hang a picture about the ability of their tight forwards, not one hammered into their coffin.

Summary
If Brad Thorn was a soccer manager in the UK, he would probably have said something along the lines of, “It was a game of two halves, wasn’t it? We scored a few early doors but struggled to shut up shop in the second half. We should have parked the bus.”.

“Hats off to the Chiefs, they kept plugging away and got to within a try of winning the game,” he said.

“I felt like the guys who started the game today did a heck of a job and played some good footy.

“I wasn’t happy with my finishers tonight.

“The job is to come on and add, and body language and where they were at, they took the foot off the throat… That’s footy and we’ll move on.”

Behind closed doors, he will probably be more concerned about the 14-31 scoreline when both teams were at full strength, rather than rejoicing in the points accumulated during their numerical advantage. 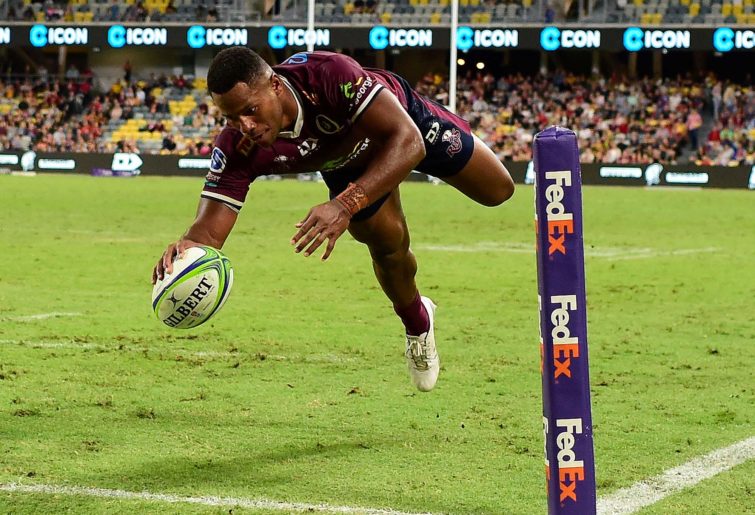 The tight forwards at the Reds are built to scrum, and they got pay from the set-piece early on – especially after the Chiefs had mystifyingly left the mountainous Samisoni Taukei’aho out of their starting front row in favour of Brad Slater. Taukei’aho is a Samson of the scrum indeed.

During the first half, the exit strategy and kick-chase held together well. But as the second period wore on, the Queensland tight forwards wore down like a clockwork toy, and their defence ended up looking no better than it had against the Crusaders right from the start.

The defensive work rate of their second row has shown a big upswing in the Trans-Tasman, but the front row makes an average of only seven tackles per man per game, and their completion percentage is way, way down at 72 per cent.

To give that figure some context, the Chiefs average ten tackles per man per game at a completion rate of 89 per cent. The Crusaders are even higher, with 12.5 tackles at 86 per cent. With the amount of ball that Queensland kick away, they cannot afford this kind of outcome.

Will Australia’s top provincial team end the Trans-Tasman tournament feeling over the moon, or as sick as a parrot? There are more twists and turns to come in the road from Townsville – but for now, a win is a win, and it’s a results-driven business.