Well, here we are, folks. The end of the A-League home-and-away season rainbow for 2020-21. And to throw another spanner into the works, Victoria remains in lockdown for the foreseeable future.

I’ve asked the panel to tip in anticipation of the final match week going ahead as planned as well as the postponed clash between Melbourne City and the Jets that still needs to be completed prior to semi-final action.

The top six is almost set after Brisbane Roar managed three points last night, with just the Wellington Phoenix on the outside looking in and hoping the Reds stumble against the Wanderers tonight..

Good luck with your tips for the week and be sure to enter them in the sheet below to have a say in the trusted voice of the Crowd. Here are the selections and thoughts of the panel leading into the final week of home-and-away action.

I can’t see Adelaide failing to beat the Wanderers and I can’t see Carl Robinson making much difference in Western Sydney without major changes next season.

Now that Macarthur have sealed a spot in this season’s finals, they’ll want to go into them with some momentum. They should have too much firepower for a deflated Phoenix.

Brisbane Roar and Sydney FC don’t particularly like each other, but now that the Roar have booked a finals spot and the Sky Blues will finish second, don’t expect them to go at each other hammer and tongs in the Redcliffe sunshine.

The Mariners may have only just qualified for the finals by the skin of their teeth, but doing so will have given them a confidence boost. Western United, meanwhile, just want the season to end.

Neither the Jets nor the Glory have much to play for, but it could be the Novocastrians who bag all three points from a game that doesn’t matter to either side.

The Melbourne derby won’t go ahead, but if it did, City would win it.

City’s clash with Newcastle won’t be played either. I expect this match to be anulled and voided.

I concede defeat. Paul Nicholls has bossed the season from both a tipping and good looks perspective. Well played, 70s Mo!

That concession will not stop me from going out with a bang, however, and the round will start with an emphatic victory for Adelaide against a now out-of-contention Wanderers outfit that promised much and delivered little this season.

Macarthur should defeat a disheartened Wellington on Friday night before Sydney knock off Brisbane Roar, locking the men in orange into fifth place leading into the finals. Alen Stajcic will have ripped the paint off the walls of the Central Coast dressing rooms after the disappointing and flat display his team produced on Wednesday night. It will not happen again, and the Mariners should enter the finals in third or fourth spot with a win.

I think the Jets will beat the Glory on Saturday night, with the confidence gained in the F3 Derby win used as motivation to finish the season well, and what should have been the final game of the regular season will see Melbourne City far too good for a Victory team that has improved immensely since the departure of Grant Brebner six or so weeks ago.

Who knows when the postponed fixture between City and Newcastle will eventually be played, if at all. Logic says City should win it, with their form leading into the finals no doubt high on Patrick Kisnorbo’s list of priorities. 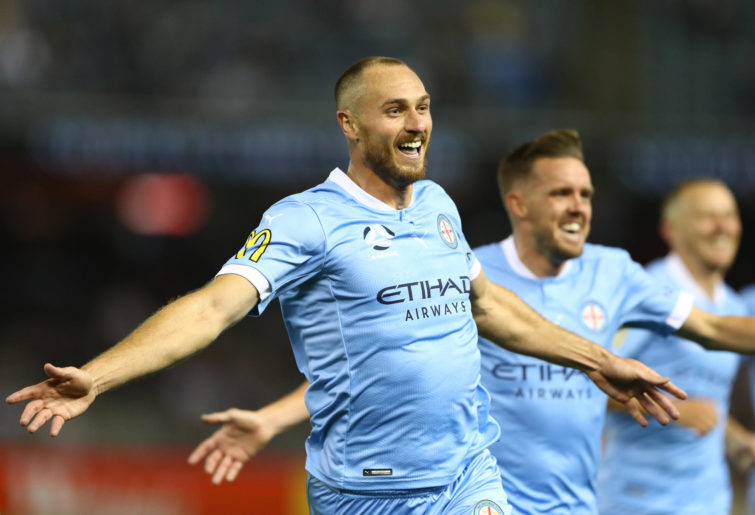 The new manager of Celtic Football club turns up outside Parkhead, the team’s home ground.
“Knock, knock.”
“Who’s there?”
“Ange Postecoglou.”
Silence.
“Who?”

It’s understandable that our Scottish friends don’t think Aussies play fitba. I mean, Celtic player Mark Viduka wasn’t an Aussie, was he? If only the A-League was as easy to tip as the Scottish Premier League, we’d all sleep easier.

Adelaide disappointed in their big game against Sydney. It was their second significant defeat against the top two, having also lost 1-4 to Melbourne City last month. Maybe they should try the aerial route against Western Sydney. The Wanderers were woeful on every corner against Wellington. Adelaide to win this one.

With an undefeated streak of ten matches, Wellington are in great form. I think they can beat an up-and-down Macarthur. Everything old is new again at Sydney FC. Adam Le Fondre and Bobo showed they still have what it takes against Adelaide. Sydney to continue their good form against Brisbane.

Central Coast missed defender Ruon Tongyik in their loss to Newcastle but should be too strong for the battling Western United. The 11-day break suited Newcastle, and if they beat Perth Glory, they may avoid the wooden spoon. Look out, Perth; the Jets are coming.

Melbourne Victory astonished everyone with their 6-1 belting of Western United, while Melbourne City’s last outing was a rare defeat. Without Jamie McLaren, City might struggle to win the championship but should still beat Victory.

Texi Smith
Western Sydney, Wellington, Sydney, United, Newcastle, Victory, Newcastle
Wanderers might be in with a minuscule chance of making the top six, albeit needing every result to go their way, but in reality this is Adelaide United’s top-six spot to lose. And they will be so very cagey in this one, unable to string any attacking moves together. In the end a single goal from Bernie Ibini will be enough to take the points and keep the door open for more drama on the weekend.

How the hell are Macarthur in fourth? That’s an insult to the Mariners, who are on equal points. Wellington will flex their muscles and play with total abandon in a superb 3-2 win, with Steven Taylor signing off on his Phoenix career with a late header.

Brisbane will buckle under the constant pressure of Sydney FC. The intricate footwork of Adam le Fondre will prise open the defence on three first-half occasions, Sydney going in 4-0 up at the break. Roar will rally, but further goals will make this a rout, the Sky Blues turning on the style to end the season as the league’s form team.

Mariners will limp into the finals on the back of another home defeat. Western United had a poor first half against Macarthur last time, and if they play like that, Central Coast will survive until halftime. The sublime skills of Alessandro Diamanti will dazzle in a late surge by the visitors and United will come away with a one-goal win through that man, Dylan Pierias.

Newcastle played very, very well against the Mariners and will be keen to follow that up for the home fans. Perth will battle for every ball to make this a tense game, and just as it seems to be heading for an exciting 0-0 draw, up pops Nikolai Topor-Stanley to bundle home a goal late in the game to win it for the Jets.

We have another Melbourne derby to finish the season, and revenge will be sweet for Victory. Jake Brimmer will score the only goal to send the Victory faithful home knowing that the win has kept them off the bottom of the table – for now at least.

The whole league will be watching to see if Newcastle Jets can get the point that sends Victory to the bottom when they tackle City in the final match of the season, whenever it is played. With City resting the majority of their team, this will be a betting irregularity special, with Newcastle winning 3-0.