Buckle up because the match of the season is tonight and it needs to be analysed in depth.

While last week’s top-of-the-table clash drew headlines, the contest between the Demons and the Lions is a meeting of the two best, most well-rounded teams in the competition. A marquee fixture that will be held at the home of the GWS Giants is a little anticlimactic, however, we are getting an early taste of what could be a match-up seen deep in finals time, which makes up for the venue.

For the Lions, they have been unstoppable over the last seven weeks, winning every game with an incredible percentage of 171.95, knocking off teams like Richmond, Port Adelaide, GWS and Essendon along the way.

A slow start to the season drew the ire of many a fan but having spent a COVID-riddled 2020 largely at home, playing three straight away games in Victoria in the opening four rounds was an excuse worthy of acknowledgement. Since that point, despite missing Lachie Neale, Jarrod Berry and Darcy Gardiner for large parts, Brisbane have had total control over the entire ground and been comfortable in collecting their last 28 points on the ladder.

The Lions have been systematically destroying teams with good pressure around the ball allowing for an easier avenue to intercepting in defence, and the slick ball movement in transition through the best kick-to-handball ratio has seen blistering counter-attacks and flood-like pressure in the forward 50.

Similarly, Melbourne have been extremely strong across the field without any clear deficiencies being identifiable in the first half of the season, other than complacency and mental blanks experienced in the shock loss to Adelaide.

The Demons have conceded the least points per game, led by Steven May and the incredible intercepting efforts of Jake Lever, and have made the necessary adjustments to accommodate for the season-ending injury to vital cog Adam Tomlinson.

Melbourne constantly apply relentless pressure and adopt a similarly simple mindset to Brisbane with ball in hand, which is to get the ball forward and provide opportunities to the forward line, albeit in a more adaptable sense with the midfield equally as good as handballing their way out of trouble, as they are in using their long kicks.

This is certainly the game I have most been excited for – some readers may be aware of my long-standing thoughts on Melbourne from February this season, while others will know that the Lions have been my official tip to win the premiership in 2021.

The fact these two teams occupy the first and third spots on the ladder respectively and are competing against each other halfway through the year is a blessing to all AFL fans, and despite the unsettling state of the league at the minute with fixturing chaos, we will get three hours of bliss when these two teams collide.

With similar goals in mind and great depth in all areas of the ground, this contest is more akin to a chess match, rather than a blowout like Melbourne’s win over the Bulldogs ended up being.

When analysing the numbers, it’s extremely evident that both teams pride themselves on at least breaking even with their opponents in as many statistics as possible.

In fact, for the Demons, the only category that they have a significant negative difference in is averaging 11 fewer one-percenters per game than their opponents, which won’t cause Simon Goodwin to lose too much sleep given how much control his team has during a game. Proving how comfortable they are both offensively and defensively, the Demons average 7.6 fewer turnovers per game than their opponents – ranked best in the league by more than double the next best team, which happens to be Brisbane with a -3.5 differential.

For the Lions, it’s clear that they look gain field advantage through disposal rather than run or immense pressure, averaging five fewer bounces than their opponents, as well as four fewer tackles, while hitouts have been an issue on their own.

This is down to the fact that, while the Demons are one of the stronger pressure sides in the competition, they only break even in clearances, whereas the Lions are ranked third for clearance differential.

Ultimately, Melbourne are far more willing to commence their scoring chains from deeper and back their defensive unit to kick start the efficient ball movement, whereas Brisbane tends to already have a field position advantage, and aren’t required to start as deep. This is evidenced by how high Daniel Rich is actually winning the ball, with a lot more of his kicking coming from right on the arc of the defensive 50, and in the centre square. 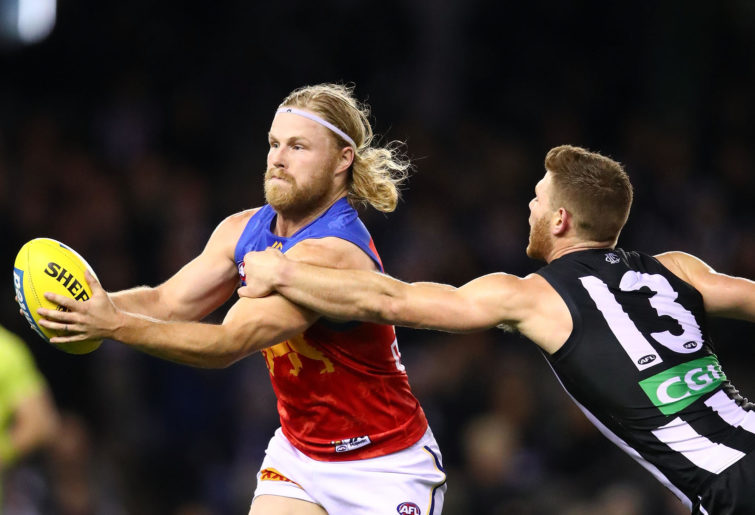 Melbourne are ranked a clear first for intercepts, averaging 80.3 per game, and use the incredible running power of Ed Langdon and Angus Brayshaw, as well as the elite kicking of Christian Salem, Steven May and Trent Rivers to transition the ball.

The Lions are ranked second in the category, averaging 75.5 per game, largely on the back of forcing long high-balls in, which Harris Andrews feasts upon.

It’s all well and good to list all these numbers, but in practice, how can each team use statistics to win the game?

If we take a look at the Demons, a victory will come down to pressure.

Melbourne average 64.5 tackles a game, ranked equal second in the competition, and 12.1 tackles inside 50, ranked second. With such high numbers through attack and in the midfield, it places such huge pressure on the opposition that they end up often booting the ball inside 50 in a directionless manner, more focused on disposing of the footy rather than setting up a scoring play.

Jack Viney’s absence has been offset by the return of James Harmes, both averaging over six tackles a game, while James Jordon has been a revelation for the club, averaging 6.7 himself.

Clayton Oliver is the club’s best player and does it all, while the likes of Alex Neal-Bullen, Kysaiah Pickett and Charlie Spargo have done the damage up forward. This will be the directive from the coaching staff – tackle with aggression and tackle with intent.

The Demons have a gameplan that is multi-faceted, yet strongly linked to elite pressure numbers that cause opposition to crumble. Their opponents average 80 turnovers a game, a league-high, and this is exactly where the game will be won for the club.

While Brisbane are the least efficient team with ball in hand, they make up for it with the fact they tend to cover ground with their kicks, meaning if they turn it over, they can still be set up behind the ball. The advantage to their general field position means they shouldn’t be caught out defensively.

While Melbourne will of course rely on Oliver, Max Gawn and Christian Petracca through the midfield, the key will be to close the Lions into their defensive 50 a force them to make errors from deep. Putting pressure on Andrews, Rich, Brandon Starcevich and Grant Birchall will force them to either over-possess or dump the ball from deeper, which gives Melbourne superior field advantage.

The fact Melbourne runs games out better than anyone with an elite fitness base takes a slight hit with Ed Langdon’s unavailability, so it’ll be the four-quarter tackling pressure offensively that does the job for them.

Brisbane, on the other hand, need to show adaptability for the first time in a long stretch, given they’ve had the game on their terms for nearly two months.

A clear strength of the Lions is contested marking, particularly with Joe Daniher playing some excellent footy.

Even if the Lions can withstand the pressure coming from Melbourne, they need to keep in mind that the Demons concede the second-fewest contested marks per game, as well as the fewest marks inside 50. Should the tackling pressure not work, Melbourne has Max Gawn pushing back into defence to nullify aerial contests which, along with Jake Lever’s reading of the play, makes it extremely difficult for even the biggest forwards to take control.

It’s why the clearance advantage the Lions have had over the opposition simply must be maintained in Round 12. Jarryd Lyons and Hugh McCluggage are playing incredibly well through the midfield while the returning Lachie Neale will give the Demons a headache as to who to tag.

Lining up Lyons on Oliver and frustrating Petracca with Rhys Mathieson may be the way to ensure Brisbane stays on top, and in doing so, the Lions can create better opportunities for their forwards to overcome the statistical obstacles facing them.

In centre clearances, a win means Melbourne are exposed to one-on-one contests, and Eric Hipwood and Daniher are too tall for their opponents, while the speed of Charlie Cameron and guile of Lincoln McCarthy will be far more effective in one-on-one situations.

Around the ground stoppages are important to control too, as the Lions work quickly to get the ball to the free, elite user who sets up either centrally, or at the back of the contest. Moving the ball efficiently out of the ruck contest deprives Melbourne of the opportunity to hone in on an opponent immediately, which is enough time to be direct and accurate with forward ball movement.

Even if the entries inside 50 are typically high and long, if they’re done quickly, Brisbane are too big and strong in the air and dangerous at ground level.

Defensively, Brisbane need to look for constant ball movement inside the defensive 50 and really stretch the Demons.

For the fitness edge Melbourne have, they have yet to play a team that is almost their equal in intercepting and are so willing to kick the ball in a direct fashion, which should lead to more lateral movement. If Brisbane keep trying to switch the play and create space in this manner, Melbourne’s elite forward pressure will be pushed to its limit without the ability to attack the player.

Ultimately, the Lions want to restrict how much pressure they’re under in defence, and the best way to do that is to manipulate the opposition and create a situation where their own turnovers will still benefit them by being able to guard space. Making sure Harris Andrews isn’t drawn out of position by playing the returning Ryan Lester on Tom McDonald will be a key factor.

It’s a truly fascinating contest between two teams that are very similar in their values, yet extremely different in their execution.

A loss to either side doesn’t delegitimise their premiership credentials, as much as people are still looking for ways to write the Demons off in particular. When push comes to shove, it’ll be where either team can get a slight edge.

Mentally, Melbourne were fired up for their clash against the Bulldogs last week, and maintaining the intensity could be tough.

Brisbane’s run has been great, but this big scalp will make it even better and one would suspect that notion has been hammered home to the players.

Friday night footy is certainly alive and well, and the Lions’ returning players tips the contest in their favour.