I recently watched a reply of the 2001 match-up between the St George Illawarra Dragons and the Wests Tigers.

The match featured a very young Ben Hornby and Mark Gasnier. Who’d have thought that both players would be instrumental in the 2010 premiership-winning team, with Ben Hornby forever writing himself into Dragons lore by saying the win was for the “true believers”.

The match also featured Nathan Blacklock scoring yet another hat trick of tries including an audacious solo kick and chase that won the game, followed by his customary somersault.

Before you rush to the comments section to disagree with me, I’m not suggesting that Cody Ramsey is in the same class as Nathan Blacklock. At least not yet anyway. But I was struck by their similarities. Both are a similar build, both are very fast and both are a little unorthodox.

The other thing that really stood out was how often Blacklock’s number two jersey turned up in the middle while the Dragons were on the attack. We all remember Blacklock’s roaming commission but in an era of structured rugby league, his ad lib playing style really stood out.

In retrospect, not enough has been said about Blacklock’s ball-playing skills. He really was an early prototype of the modern-day fullback.

This got me wondering, given the uncertainty around Matt Dufty’s future, could Cody Ramsey play a similar role to Blacklock in 2022? 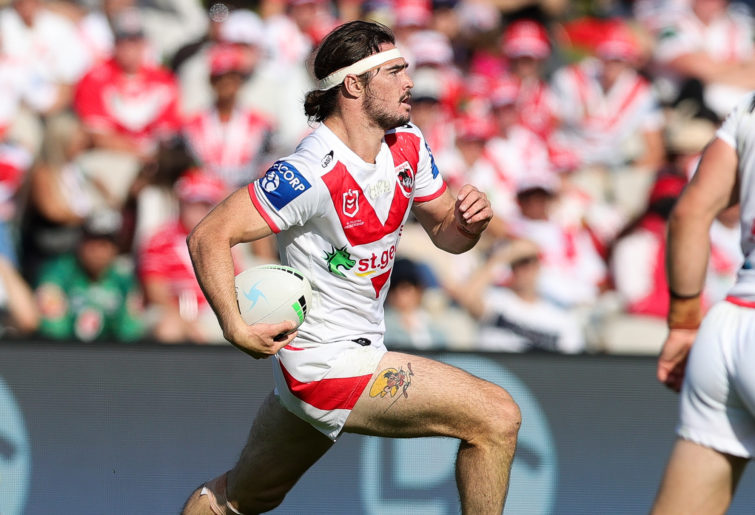 At this stage with Dufty on the outer, Ramsey looks to be Anthony Griffin’s preferred fullback for 2022. Ramsey hasn’t shown any passing skills but neither had Darius Boyd before he wore the Red V.

Remember Boyd was a winger at Brisbane then went on to be the club’s best fullback since Graeme Langlands. Mick Potter also went pretty well. Plus I don’t remember Dufty having any ball-playing skills when he first played first grade. These skills take time to develop.

If Dufty does move on to another club, I’d assume Corey Norman will follow him. Without Dufty the Dragons will need a lot more production from the five-eighth position than Norman can offer.

The obvious heir apparent is Jayden Sullivan, who’s had an outstanding junior career but he’s unproven in first grade. Sure, he had a very good game against an under-strength Melbourne team in Round 20 in 2020 but a player can’t be judged by one game.

The point I’m trying to make here is that the Dragons will most likely field two inexperienced players in key positions in 2022: Ramsey at fullback and Sullivan at five-eighth.

Thankfully there’s plenty of experience at halfback and dummy half, but it’s a huge call to let Dufty walk given that Ramsey is so inexperienced at fullback.

Ramsey is more likely to play a roaming running game like Blacklock rather than be a ball player like Darius Boyd or Matt Dufty.

It’ll be interesting to see how it all turns out. After a full off-season Ramsey might be a revelation at fullback next year, but he’ll need to be. He’s got big shoes to fill.

This decision to let Dufty go is Anthony Griffin’s. He’s basically pinning his future on it. If he wants a contract extension next year, he’d better be right or he’ll find himself commentating on the radio again.