Five talking points from AFL Round 12

Ah, the bye rounds. Why the league feels the need to drag them over three rounds, I’ll never comprehend, but here we are.

There was still plenty of footy this weekend, with some upsets, some reaffirmation of contenders and some disappointment. Here’s some talking points.

Melbourne, yet again, are officially official
Faced with a significant halftime deficit, a Brisbane side featuring the return of Lachie Neale, a hastily changed venue and – most worryingly of all – expectations, the Demons did not welter, and produced a superb victory.

Let’s be very, very clear – they did not have it all their own way on Friday night. For portions of the first half, it was looking like the Dees would struggle to come back into the game as the Lions ran rampant, showcasing that they are contenders of their own. I really enjoyed the Lions’ electric play during the first stanza, as they got the jump on the Dees and with Neale adding his usual class to an already classy outfit, they looked the goods at up until the main break.

But Melbourne took control from there, flipping the story in the midfield and booting nine of the final 12 goals. Much as they managed to disrupt the Bulldogs’ play last week, the Dees were able to seize control of the play, and combined with the Lions fatiguing badly, it quickly became their game to lose.

The win passes another test for Simon Goodwin’s men, who have now beaten every current top eight side (Brisbane, the Dogs, the Swans, Geelong and Richmond) they have faced, and would be bound to start favourites against the Eagles and Port when they face them in the coming weeks.

It was yet another reminder of just how good this Melbourne outfit is in 2021, and just how good a chance they are win this whole competition. Seriously, if you are not recognisant with the fact that the Demons are premiership contenders by now, I struggle to grasp what else they need to do to convince you.

Collingwood flick the switch, winning a thriller
They’d been hounded the whole week – including by yours truly, who described their clash against Geelong last week in fairly harsh terms – but Collingwood managed to surprise in a big way on Saturday.

They were not seriously considered a chance at an upset, certainly not a plausible one – that label belonged to the Bombers, maybe St Kilda – but nope, Nathan Buckley’s men managed to ignore the criticism and Adelaide’s generally impressive home form to sneak the win they needed.

The win appeared to be the antithesis of Collingwood’s recent, allergic-to-scoring plays of the last few weeks, with the Magpies endeavouring to be as offensively minded as possible as early as possible against the Crows, establishing an unshakeable lead by quarter time.

Four of their five majors for the term came through Jamie Elliott, a player who you’d be forgiven for thinking had been playing in the form of his life instead of recovering from a broken leg for the past three months. 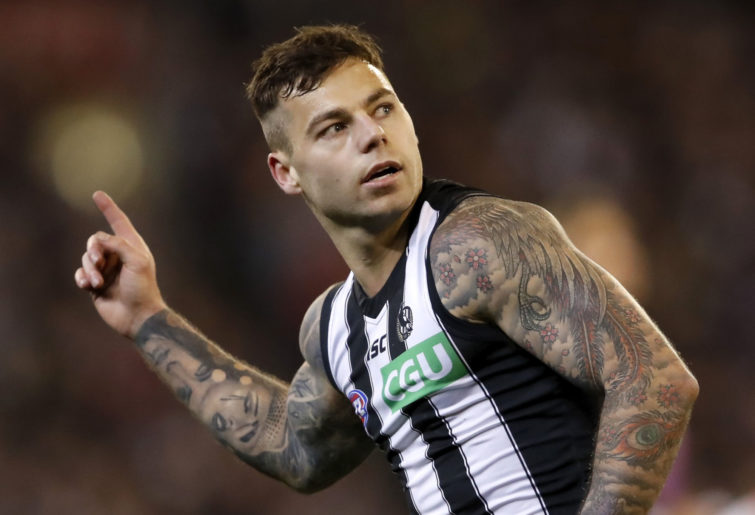 The Crows had moments of ascendency that were not enough – they didn’t struggle to close the gap, which they did a few times, but struggled to garner any genuine momentum to halt the Pies. It’s frustrating for the Crows as they vary wildly in and out of competitiveness, but who remain a danger to any side on their best day (the Demons can duly attest to that).

I’m fearful that the Pies could very well fall rapidly off this high – games against the Dees, Freo, St Kilda and Richmond await. Those latter two will be extraordinarily tough, but bookend a perfect opportunity for the Magpies to garner a bit of respectability. I can see them going 2-2 or 0-4 over the next month, such is the nature of the Pies.

Richmond win the week’s best clash, with a wildly unrepresentative margin
I alluded to it in the previous paragraph, but Richmond’s favouritism headed into Saturday’s night’s clash against Essendon was always reasonably tenuous. The Tigers were headed into the game with a somewhat shaky recent form line, but it was the Dons’ recent results that really sparked intrigue in the clash.

The Bombers – who stunned the Eagles at the same venue a week prior – have looked reborn at times this season, and they’d be lying if they argued that this wasn’t a winnable game, particularly at the neutral Optus.

It ended up not being one, but not through lack of trying. The game was intense, entertaining and a showcase of two teams at their best. There’s no doubt the Bombers are on the right track, and they’re bound to win more this season than they lose from here on out, so it’s evident they won’t be too peeved with that performance.

They’ll beat the Hawks after the bye, but then games against the Dees and Cats should enthuse them – you’ve got to beat the best to be the best, or something along those lines.

The Tigers would be ecstatic with the win, for their part. I have articulated in this column a few times that the Tigers are never really down and out, and that remains true. The final margin is genuinely one of those times where the score line isn’t indicative of the game itself.

Don’t get me wrong, Richmond wholly deserved that win, but on a night where everything – both teams, the crowd, the experience – was excellent, a blow-out win let it down.

Dreamtime in the west is a resounding success
As an Adelaide resident, I was kind of disappointed when the Dreamtime clash was sent to Perth. I’m not sure we were ever genuinely considered for the game, but Adelaide Oval is a great stadium, and doubly so at night, so my South Australian advocacy was in full flight.

Not that I ever had doubts about Perth’s ability to host a successful marquee clash, but if I did, I’d have been totally wrong. Perth put on a near-perfect show, with a sold-out Optus Stadium marking a perfect setting for the important clash. Of course, the game itself was a superb clash – but there’s something special about favouring modernity over tradition, even if it was precipitated by crappy circumstances.

When the stadium puts on a show so good it starts grand final rumblings, you can tell done an excellent job. For the record – and cue arguments about this in the comments – if the AFL was even remotely sensible, they’d take half a second to consider the idea of Perth hosting a premiership decider.

Or Adelaide, for that matter.

The Blues are an enduringly disappointing side, with a fixture to match
Carlton can do nothing but disappoint this year.

Yes, there’s St Kilda – who are the competition’s most disappointing side, at least this season. Yes, Fremantle are notorious for failing to live up to expectations. And yes, there’s a half dozen other teams that people can – if they’re willing enough – fling the disappointment label towards. But Carlton are probably the league’s most enduring disappointment.

There might be a recency bias to what I’m saying, sure. But it’s difficult not to criticise the Blues, given they were facing a struggling West Coast at the SCG – a side that had not won at that venue for as long as I’ve been alive and is enduring their part of the WA injury crisis. And here’s the part where I type what is quickly becoming Carlton’s motto: they were competitive, but just struggled to make it matter.

The most annoying part of the Blues’ streak is that the biggest losing margin they’ve had this year was 28 points. It’s somewhat easier to understand teams being thrashed on the regular – they’re just bad teams. It’s easy to comprehend a few close losses – they’re frustrating, but somewhat inevitable.

The Blues seem to be left in a kind of horrendous purgatory. They’re good enough and supposedly well enough into their rebuild to be able to challenge for finals, but looking at who they’ve beaten – the Hawks, Freo, the Suns, the Bombers – leaves me uninspired.

Look at their next few clashes: the Giants, the Crows, Freo. All three are very, very winnable. But concerningly for the Blues, all three are exactly the type of game they would manage to lose.

Everybody gets a turn
Adelaide Crows – What a definitively terrible week for the Crows. An egregious mask blunder on the flight back from Sydney last weekend, and then a shock loss to the Magpies. Just not their week.

Brisbane Lions – Melbourne will (rightly) snatch most of the attention given their win, but the Lions were themselves excellent in the first half. A literal game of two halves.

Carlton Blues – I take no pleasure in piling on the Blues, but here’s one additional glaring fact: they’ve played seven top eight teams this season for zero wins. Make of that what you will.

Collingwood Magpies – Next week’s Queens’ Birthday clash – now to be played in Sydney – is bound to be intriguing. Collingwood are rank underdogs, but stranger things have happened.

Essendon Bombers – I recall in my very first live blog I did for The Roar back in 2017 being enthused by Darcy Parish, back when he was a freshman footy player. Five seasons later, he’s lived up to my expectations and then some. Fantastic player.

Fremantle Dockers – Losing Griffin Logue to injury halfway through the game was bad. Losing Brennan Cox, Sean Darcy and Nat Fyfe to injury within the same minute in the final quarter was… well, I’ll leave the trusty Freo Twitter account to sum it up.

Us counting if we have 18 players left. pic.twitter.com/fGItbnFYBO

St Kilda – I shouldn’t be, but I’m somewhat impressed with how close they got against the Swans. But that is coming off a low, low bar, and the Saints remain the most thoroughly disappointing team this season.

Sydney Swans – Their worst performance of the year, but four points is what they needed. They got them, and we mercifully never have to speak of this game again.

West Coast Eagles – As good a win as they’d have hoped for, especially given their horrid injury list. Richmond up next in a hastily brought forward clash. A chance to be sure, but I’m not sure just how big a chance.

Western Bulldogs – A win of various highs and lows: Aaron Naughton’s 1.5 was disappointing, their first win at Optus Stadium was impressive. Peaks and troughs.