She knows it too.

“I bring a lot of energy to the team,” said George.

“From a basketball perspective, whatever Sandy [Brondello] needs from me in that moment, I’ll do my best to do whatever she needs.

“I love repping the Opals, they are my favourite team to play for and you find another gear when you play for them.”

But even though George describes herself as someone who is “almost always happy”, she has not been immune from the challenges of the last 12 months.

“I’m the type of person that always likes to change the narrative and stay positive, but it was a real challenge to not know what I was training for and being unsure as to whether the Olympics would go ahead,” said George.

“Internally, I knew the message was that the Olympics was going to be going ahead, but I just kept hearing uncertainty from the outer bubble.

“That was the most challenging part. The media are all over it and keep asking you whether the Games are going ahead.” 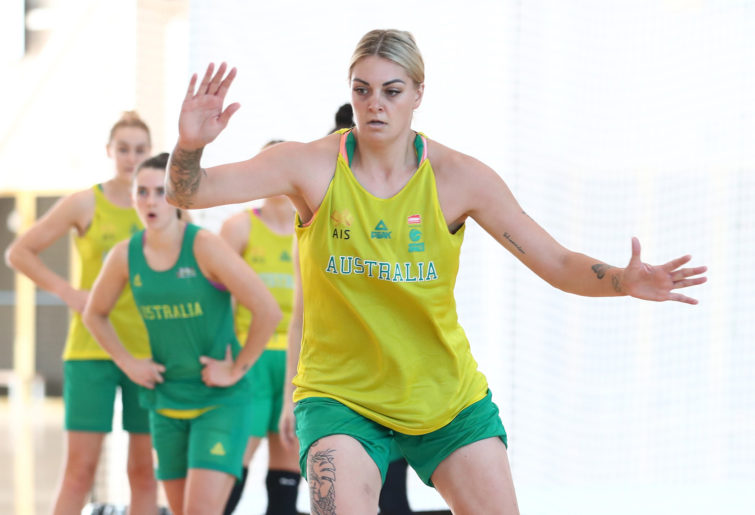 But rather than focus on the negativity, George decided to set some new goals to help her stay motivated in her training and try some new things to help her look after her mental health.

“I ended up running some programs for young girls through my socials,” said George.

“I did a 12-week program, then a four-week program and then a more internationally focused program.”

These programs were aimed at young women and encouraging them through the challenges of lockdown. As well as basketball workouts, George also showcased some general fitness and then took the young women into her kitchen to teach them about nutrition.

For George, while she’s confident that these programs helped give these young women some rhythm and routine through lockdown, she found it personally rewarding too.

“As much as I was helping them, they were also helping me to stay focused,” said George.

“I went live six days a week for 12 weeks so I was always planning and preparing and that was before I went live.

“Without it I would have found the last year much harder, so I hope it helped some of the young women that were watching.”

Engaging with young people wasn’t the only thing that kept George busy. Given George is based in far north Queensland, she was fortunate in that she lived in a state where community sport returned much sooner than most other states.

She tried her hand at netball and suggests she got a tough time because she was an international basketballer.

But that didn’t stop her from being named MVP of the league and helping her team win the A-grade state championship in Cairns.

George also tried her hand at pilates for the first time.

“Pilates has changed my life and I wish I had started earlier.

“I feel so much more agile and not as stiff, so if anything, thanks to COVID-19 for giving me the time to start pilates, it might just have prolonged my career.”

George is a testament to staying positive through challenging times and she has been rewarded, being named in the Opals’ squad for Tokyo.

This is a proud moment for George. She considers her teammates her sisters and will also be playing alongside Tess Madgen at her first Olympic Games. Madgen and George have been playing together since under-12s at the Eastern Mavericks in Adelaide.

Despite the challenges of the last year, for George it’s made her selection even more meaningful.

“It’s felt like a long time coming because of the delay from last year, but it is a really special moment,” said George.

“I never thought dual Olympian would be a title that I would have.

“My goal as a kid was just to make an Olympic team, so to make two is something that makes me incredibly proud.”

Apart from personality, George is focused on ensuring all her Opals teammates are in a position to be successful on and off the court.

“I want to make sure that from numbers one to 12, we are all solid mentally and in a good headspace, because come game time if we are all on the same page and everyone is feeling good then we are solid,” said George.

“I know that if my teammates are feeling strong and confident, we are going to be as successful as possible because we are a group that is there for each other and excited to celebrate each other’s success.”