Your club's underrated performer: Round 12

The first bye round is in the books and with a shortened fixture this week, you’d think the good performances would be rewarded more?

Well, the board room at Underrated Incorporated are in disarray after not seeing some elite performances get the love they deserve. As a humble slave to the underrated arts, I’ve put my hand up to take control of this ship and have done so.

Adelaide – Harry Schoenberg
Sometimes, you need players in your squad who aren’t the most gifted, but are the epitome of the phrase ‘blood, sweat and tears’. Now, don’t get me wrong, Schoenberg is a gun footballer who oozes skill, don’t get that incorrect, but his most adoring trait is the fact he looks like a guy who would die for his footy club.

He had 19 disposals on Saturday afternoon for the Crows, six score involvements, 15 pressure acts, 392 metres gained and an elite nine inside 50s.

Brisbane – Hugh McCluggage
The former number three pick has gone to new levels this season and is in All Australian contention for certain. When the going got tough on Friday night, he got his hands dirty.

Like most of his teammates, his ball use wasn’t as pristine as it could have been, but McCluggage was consistently around the contest and doing a bit of everything: 23 disposals, 342 metres gained, 22 pressure acts, seven marks and three inside 50s and rebounds.

Carlton – Will Setterfield
Carlton’s season has again gone to waste and they have way too many B-grade players. Setterfield does fit that category but with more solid performances like the one on Sunday, he isn’t the problem.

He gathered himself 17 disposals (13 kicks) and used it really well at 82 per cent efficiency with half a dozen contested possessions as well, along with nine marks, five score involvements, three clearances and three tackles. Tick.

Collingwood – Caleb Poulter
How good is this kid? He’s a wingman, who actually plays on a wing! In this modern game? Are you kidding me? That’s a thing? If I didn’t see it for myself I wouldn’t have believed it but a man with a gorgeous mullet is playing an outside role who is composed, has a footy brain and has talent! My goodness.

He got himself 20 disposals (16 kicks), took ten marks, half a dozen score involvements, had three inside 50s, three tackles, kicked a lovely set shot goal and led Collingwood with metres gained with 482. Collingwood have done a lot wrong lately but with especially Poulter and Trent Bianco, they’ve done okay with the youth.

Essendon – Nik Cox
Alright, the cat is out of the bag and I’m going to gush over my favourite draftee of the 2020 draft, which is strange considering I’m not an Essendon supporter, but Nik Cox is my man.

The young star and 33 per cent of Essendon’s resurgent draft haul, Cox played a ripper of a game with 23 disposals (nine contested) at 73 per cent, took eight marks, had seven score involvements, four clearances (yes, he’s two metres tall, had clearances and isn’t a ruckman) and is just showing the youth future of Essendon is a bright one. 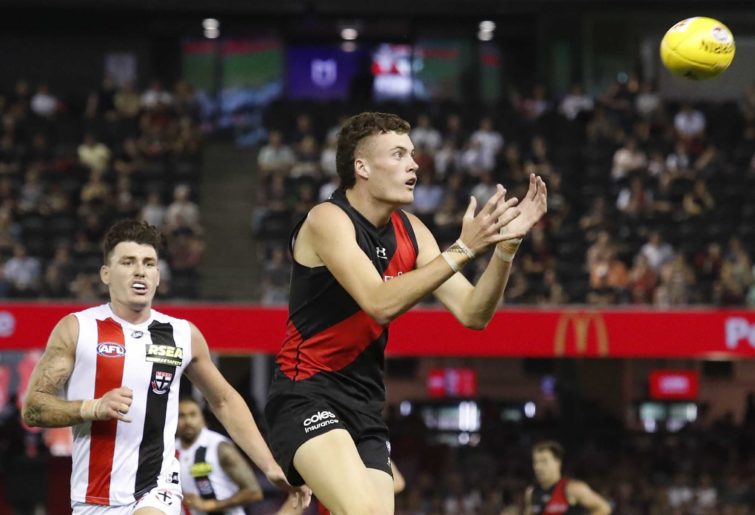 Fremantle – Darcy Tucker
Fremantle are an interesting case for study this season, given a wide range of fan and expert expectation, which is in contrast with the results they’ve produced, now being 5-7 for what seems like the umpteenth time.

Tucker has had an up and down year with his half a dozen games but 21 disposals, four score involvements, four marks and 16 pressure acts is a tick for sure.

Melbourne – Tom Sparrow
Barring your obvious half dozen to ten players, there are still positions up for grabs at Melbourne so every fringe player needs to be at their best and Sparrow flew magnificently on Friday night.

On a good night for the Dees, Sparrow had 19 disposals at 73 per cent, five score involvements, laid five tackles, had four inside 50s, took four marks and kicked a goal from just inside 50 at a crucial stage.

Richmond – Liam Baker
It’s pretty fortunate that there is some self appeasement here, given my love for this man is at a very high level. However, it’s men like Baker that make Richmond as good as they are given he’s versatile, tough, plays his role fantastically and always gives it all.

Take Saturday night for example. Look on Instagram and it’s the Dustin Martin and Shai Bolton show, with Darcy Parish highlights but for goodness sake, acknowledge the other guns. Some 19 touches, seven marks, five rebounds and four score involvements for the WA stallion was a very good evening.

St Kilda – Jack Sinclair
It’s not often that a 29-disposal game makes onto this segment but alas, here we are. St Kilda were the Jack Steele, Brad Crouch and Jack Higgins show but Sinclair was simply outstanding.

He had 29 disposals at 72 per cent efficiency and continuously got his hands dirty (11 contested possessions), had eight score involvements, six rebound 50s, four marks and three inside 50s. Again, outstanding.

Sydney – Harry Cunningham
Often maligned by Swans fans, Cunningham always seems to be on the fringe and as much as he’s gone missing in the past, he was one of many very good Swans players on Saturday.

He had an insane 92 per cent efficiency from his 25 touches and took nine marks as he played an outside role and was involved in five scores. A cheeky 332 metres gained doesn’t go amiss either.

West Coast – Jack Redden
The former Lion is the forgotten man in the West Coast midfield but on a day where injuries were ravaging the list, the Eagles stepped up as did he on Sunday night.

Western Bulldogs – Taylor Duryea
The former Hawk has featured in this segment before and he is back with a vengeance, as are the Western Bulldogs, after the footy world thought they were imploding with losing to Melbourne.

Duryea had 22 disposals (16 kicks) at 86 per cent efficiency, took seven marks, had five rebound 50s, had four inside 50s and even had a clearance. You need more than superstars to win a flag and Duryea is a very good piece.