It was the theme tune for one of the Hollywood blockbuster movies back in the day, The Jewel of the Nile featuring Michael Douglas, Kathleen Turner and Danny de Vito, who provided background support in white suits for the video. It was so good, it even returned to number one in the charts for a second time in 1999, when the track was re-recorded for Comic Relief by Boyzone.

If the song was infectious, its banner headline was even more so. What do the tough do when confronted by a new challenge? The Kathleen Turner character in the movie was not too sure.

“When the going gets tough, the tough, well… I don’t know what the tough do.”

Despite the lopsided nature of the scorelines, Wallabies head coach Dave Rennie will have a far better idea of what the tough do after Super Rugby Trans-Tasman. The higher level of competition will have been a great help in sorting out the wheat from the chaff in the jostle for Test places in July.

If he didn’t know it already, it will also have reaffirmed what works and what doesn’t against teams from New Zealand. The Force, even with such limited scoring power, can stay in games with their Kiwi opponents because they know how to keep the ball and limit the number of tackles they have to make.

The Westerners have made the lowest number of tackles per game at the highest completion rate (85%) while conceding the fewest points (117). Teams that are far more dangerous on attack but not so good at maintaining possession (like the Reds) have had to make 20 more tackles per game at a very modest 77 per cent success rate while conceding 51 more points than their brethren in the west.

The Reds scrum, which looked world-beating during Super Rugby AU, has not enjoyed the same impact against Kiwi opponents, and some of its front-rowers have been exposed by the higher tempo of play in defence. These are all new lessons that were previously masked by the lower standard of play.

Within the success or failure of a team, there are always individuals who rise to the new challenge. They are resilient and have the mental toughness to confront adversity head-on.

From this perspective, events in the back row have made for compulsory watching, and especially so in the problem positions of numbers six and number eight. These have proved to be a conundrum for Wallaby selectors over the past few seasons.

At the end of Super Rugby AU, the key Australian options at these spots had posted the following stats:

Harry Wilson and Lachie Swinton were work-rate headliners, but in domestic competition Wilson was struggling to make an impact (especially as a ball-carrier) while Swinton still had discipline issues to resolve (in the “T/O” column). Rob Valetini was the toughest on the gain line in both attack and defence, and Tim Anstee had flashed some promise as a game-breaker for the Force.

With limited experience in the 15-man game, Tim Anstee has obviously struggled to get himself involved at the higher level of competition. Wilson and Swinton post even greater workrate on both sides of the ball, with the latter showing definite improvement in the discipline department.

Perhaps the most interesting stat is the change in Harry Wilson, whose decisive outcomes (breaks, assists etc) have exploded while his gain-line dominance remains unchanged. Rob Valetini is still the most powerful inside ball-carrier in the Australian game.

There were some hints of a different, and more creative, usage of Harry Wilson by the Reds towards the end of their game against the Crusaders:

In the first example, Wilson is the man on the edge in attack, in the second he is defending wide in defence. In both cases, there is evident comfort playing in space, with the Reds number eight delivering a crowd-fooling dummy for the first try, and delivering an over-the-shoulder offload of which David Campese would have been proud of for the second five-pointer.

The following week versus the Chiefs, there were signs of a growing recognition of what kind of ball-carrier Wilson really is:

In American football, a clear distinction is made between the type of running back who is a hole-runner, and a power back who wins collisions. The hole-runner is an expert at identifying and penetrating the gap quickly, while the second is happy to accept contact and win his metres after it has occurred.

It is becoming evident that Wilson belongs squarely to the first group. In the instance against the Chiefs, he steps off his right foot and angles his run in between two forward defenders to make the break.

The weekend match against the Blues added further fuel to the fire. If you run the Reds man straight at people, there is much less probability of a positive outcome:

Wilson runs straight into Akira Ioane without any attempt at deception, and the result is predictable: no gain, but quite a lot of pain.

Compare that with this creative set-up with Hunter Paisami in the middle of a pod and Wilson running the hole outside him:

Wilson sees the hole and the angle he must take to penetrate it from way, way back. As a consequence, Akira’s compadre at the salon, Patrick Tuipolutu, is left flat-footed and gets nowhere near making a stop.

Having Harry Wilson run late into a hole beside the ruck off Tate McDermott is an excellent masked use of both his running ability and work rate: 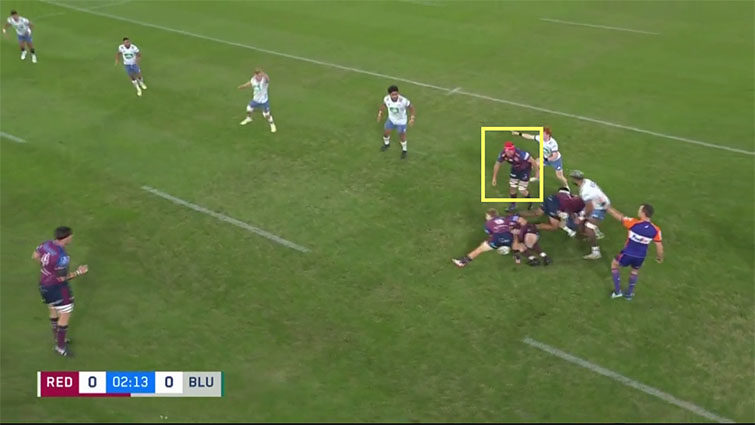 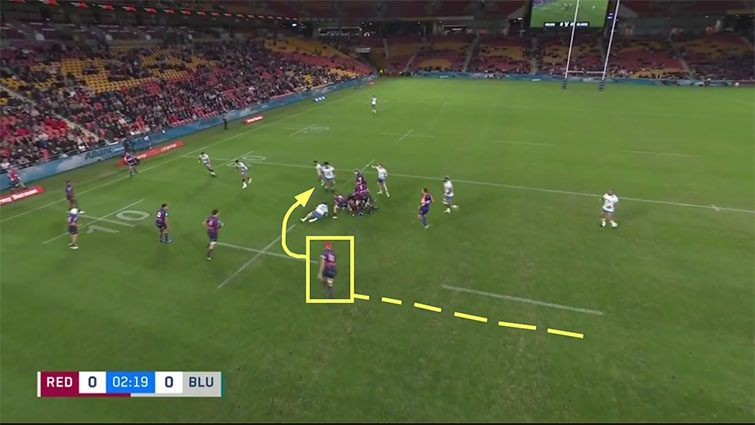 Wilson starts the play next to the breakdown, then runs across the width of the field to make the extra man in attack.

The game against the Blues also furnished further evidence that Harry Wilson is well able to handle the demands of the wide channel on offence:

Okay, maybe keep the ball in hand next time, Harry.

Summary
Super Rugby Trans-Tasman has proved a rough ride for the Australian teams. But slowly, the cream is rising to the top, and the tough guys are getting going – even if they did not know quite what to do at the start of the tournament.

Dave Rennie will already have a much better idea of who is a genuine Wallaby contender with four rounds of the competition gone. He will also have an even clearer understanding of what works and what doesn’t against opponents from the shaky isles.

In the back row, Michael Hooper will be an automatic choice as captain-designate, what with Fraser McReight falling so sharply out of favour in Queensland. But who will join him in the cursed spots at blindside and number eight? 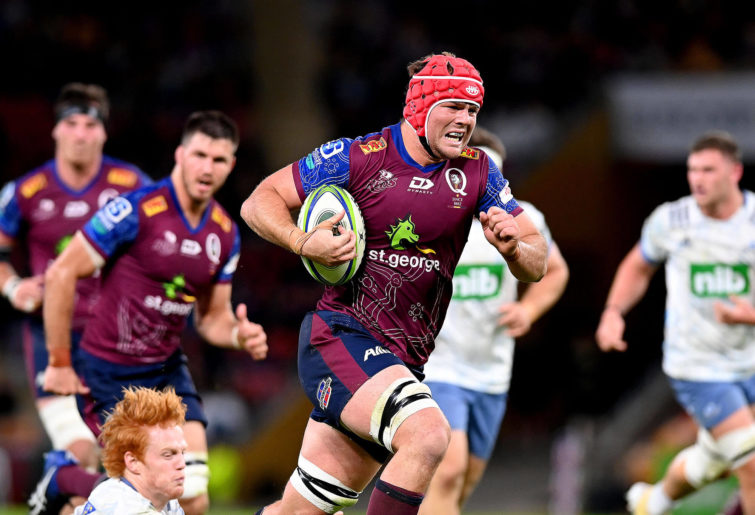 A strong case is building for Rob Valetini to start at number eight for Australia, if he can handle the chores at the back of the scrum. He is by far the best first-wave ball-runner in the country, if Isi Naisarani remains out of the selectorial equation.

At blindside flanker, Lachie Swinton looks to be responding well to the demand for more discipline to add to his physicality and strong work ethic, but he may find himself under unexpected challenge for the spot from the Reds’ Harry Wilson.

Wilson is really a hole-runner and a second wave ball-carrier, not a straight-ahead power merchant. So why not let Valetini handle the load on first phase, and then find an angle for Wilson thereafter? Why not play Rob inside during phases, and let Harry roam on the flank?

It will take time to play the All Blacks on an even field, but maybe not as much as expected at the beginning of Super Rugby Trans-Tasman. As the Kathleen Turner character says in the movie:

“In my last novel, Angelina and the Savage Secret, Angelina used a nail file to chip away at the bars of her cell to remove them and escape to freedom.”

“How long did this take?”