The Roar
9th June, 2021
9
Join the conversation
Advertisement
Write for The Roar

They say State of Origin 1 will kick-off at 8:10pm (AEST) tonight. However, if you’ve ever watched the Maroons and Blues do battle over the years, you’ll know that simply won’t happen.

It used to be a complete and utter punchline, with kick-off times sometimes being off by 20 minutes, but recent seasons have seen the players and referees get their act together and bring kick-off times closer to schedule.

However, Origin still regularly kicks off roughly three to four minutes later than it’s supposed to.

This year could be different. Given the hasty change in venue from the MCG to Townsville’s Queensland Country Bank stadium, the Origin full-day schedule looks a bit thinner than usual.

The Veronicas are the only listed pre-match entertainment and, while their set doesn’t have a listed end time, the fact it begins a full 45 minutes before kick-off surely means it can’t interfere with the game starting.

No curtain raiser match also puts a lot less pressure on the rest of the evening.

It all comes down to when the Welcome to Country and National Anthem take place. The NRL hasn’t listed them on the official run of events at the time of publishing, but they will absolutely happen.

So, with all that in mind, will Origin 1, 2021 make history as the first ever State of Origin match to actually kick-off at the listed time?

Or will rugby league fans again be made to suffer as the minutes tick past 8:10pm without the ball being kicked?

Be sure pop your predicted start time in the form below and comment below with your thoughts. We’ll publish the results of the the State of Origin kick-off bingo poll roughly and hour before kick-off and, once the game does eventually get underway, we’ll pop the actual kick-off time in here as well. 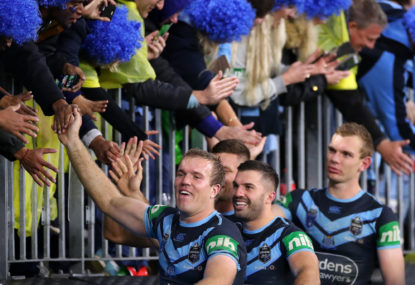