The New South Wales Blues have racked up 50 points for the second time in their State of Origin history, embarrassing the Queensland Maroons in Townsville. Here are my talking points from Game 1.

More Origin 1
» REACTION: Maroons are headed for a 3-0 Blue-wash after insipid Game 1 display
» MAROONS PLAYER RATINGS: Queensland struggle all across the park
» BLUES PLAYER RATINGS: Turbo stars but all NSW players dominate
» AS IT HAPPENED: Game 1 scores, highlights, result and blog
» Team news for NSW and Queensland ahead of Origin 2

The Blues spine is something special

Fifty points in an Origin game isn’t something that happens all that often.

Brad Fittler will more than likely want to talk about how good his team’s defence was throughout the game and, don’t get me wrong, it was exceptional.

But their attack was on another level. Given the way the Blues imploded in Origin last year despite being heavy favourites, fans and punters alike could be forgiven for having serious question marks over the team coming into this year’s series.

Those questions were answered emphatically across the 80 minutes, however, with James Tedesco, Nathan Cleary, Jarome Luai and Damien Cook all having excellent games and, more importantly, being leaps and bounds ahead of their opposite numbers in maroon.

While Tedesco and Cook have proven themselves previously at this level, Cleary had his best game in sky blue, shutting down his doubters after some sub-standard performances previously.

More importantly for New South Wales, he managed the game and got through tough periods and despite playing with a severe cut to the face. He also had an excellent combination with debutant Jarome Luai, who took to Origin as well as any rookie we have seen in recent history.

Maybe it shouldn’t be a surprise given how good Cleary and Luai have been in guiding the Panthers to 12 straight victories to start the NRL season, combining for 26 try assists, but neither of them put a foot wrong.

The Maroons have a lot of homework to do defensively if they are to stay in the contest next time around. 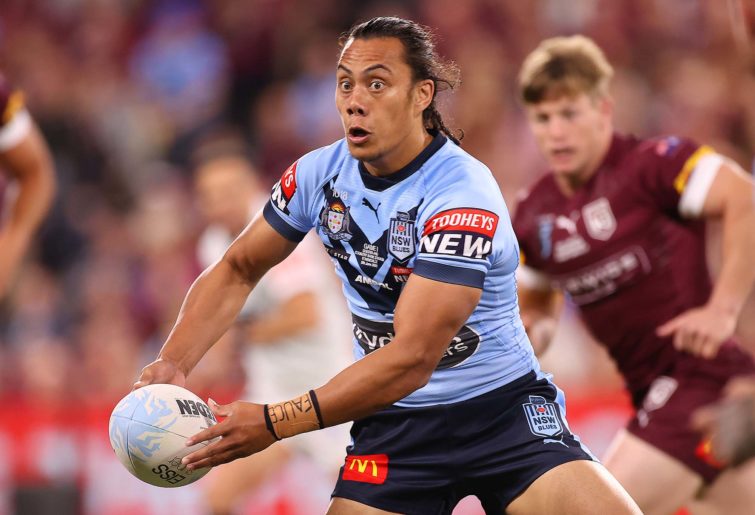 Queensland’s back five have to be better in Game 2

It goes without saying that the Maroons will have to be better in every element of their game come the next instalment of this series at Suncorp Stadium.

While there were differences all over the park, the biggest one was in the outside backs – in both attack and defence.

In this new era of rugby league, with six agains and a fast style of play, possession, territory and minimising errors are absolutely everything.

The Blues were able to do that by getting their sets off to good starts on a consistent basis, with four of their five outside backs running for almost or over 200 metres.

The only member of the Queensland back five to clear 100 metres was fullback Valentine Holmes.

The Blues back five almost acted like an extra forward, while the Maroons’ back five, in a throwback to Game 2 last year, failed to get their team onto the front foot at any point.

That lumped pressure onto the forwards and, in turn, halves Daly Cherry-Evans and Cameron Munster – who failed to deal with it at any point.

More than that though, the Maroons’ back five were atrocious defensively. They made 14 missed tackles and nine errors between them.

With numbers like that, especially against the potent outside backs of the Blues, it’s going to be near impossible to win a game of rugby league, let alone in the Origin arena. 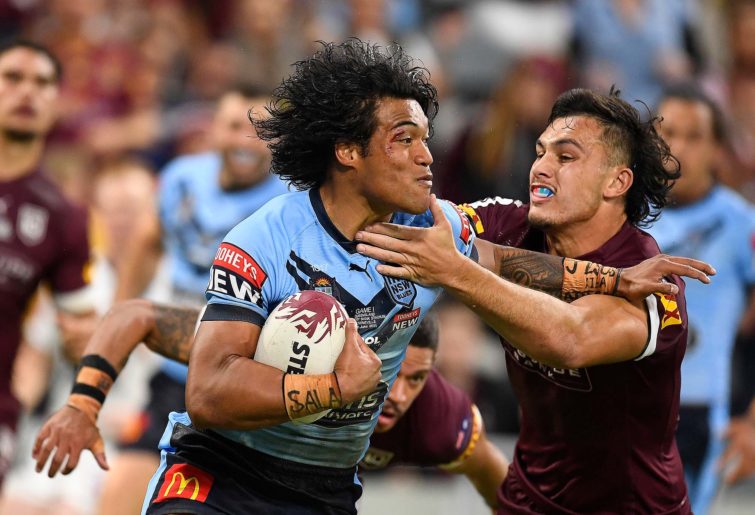 It’s not every day your potential starting front rowers are coming off the bench, but for the Blues, that is exactly the situation they found themselves in.

While the Blues had been good early in the contest, the Maroons certainly weren’t out of it. But just as the home side attempted to turn the momentum around and make their own way into the game, Payne Haas and Junior Paulo rocked the game again.

Paulo was solid in his job, almost as you’d expect a bench forward to be, but Haas showed everyone why he is regarded as one of the best props in the game.

In a monster 57-minute stint, he made 132 metres from just 13 runs and added 33 tackles without a single miss. Not only that, but his footwork, ball playing and four tackle busts added time and space for Cleary, Luai and Tedesco to work with through the middle.

While Liam Martin and Jack Wighton didn’t have quite as much impact, they were never going to, and simply didn’t need to given the outstanding efforts of Tariq Sims and Cameron Murray in the second row, and the entire backline in the 44-point thumping.

The bottom line for New South Wales is that Haas, Paulo, Saifiti and Jake Trbojevic, as well as the elusive Isaah Yeo in the middle third, make for an excellent rotation that Queensland will struggle to match all series, even when Josh Papali’i makes his likely return for Game 2.

Christian Welch proved his importance to the Maroons

You could almost hear the collective groan from Queensland supporters when Christian Welch was taken out of the game with a head injury assessment (HIA) in the first ten minutes.

That groan only got louder when it was confirmed he wouldn’t return.

While Welch wasn’t able to have a great deal of involvement for the Queenslanders during the opening minutes, he has fast become one of the best props in the competition within the Melbourne system. It’s been clear to see playing under Craig Bellamy has allowed his development to go from strength to strength.

He has made just a tick under 150 metres per game, tackles with great efficiency and has had 32 offloads in 11 appearances for the Storm so far in 2021, and it was that influence the Maroons desperately needed at times.

Of course, losing a starting prop is going to impact the rotation whichever way you look at it, particularly in a brutally fast-paced Origin game, but the loss of Welch stung just a little bit more.

Granted, Moeaki Fotuaika stood up and led the way in his absence, but he didn’t get the help he needed, and it showed on the final scoreboard. 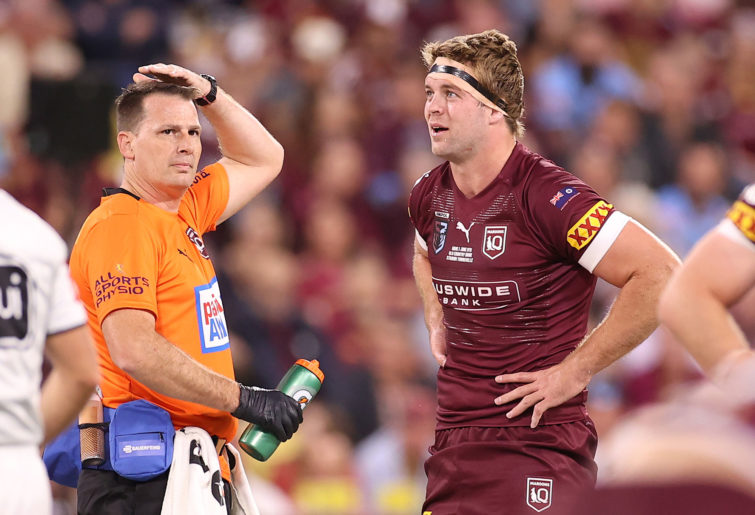 The Blues nailed their centre pairing

One of the more pleasing elements of the Blues’ game was the centre pairing of Latrell Mitchell and Tom Trbojevic.

The duo both had outstanding games, with Trbojevic setting the bar from the opening minute by taking two of the first four runs, while Mitchell, once he got into the game, was absolutely impossible to stop.

The only blemish on centres’ game was Tom Trbojevic missing a simple one-on-one tackle to allow Kurt Capewell to stroll over for the only Queensland try.

Both centres approached the 200-metre mark, combined for three try assists, three line breaks, five tries and 14 tackle busts, while they were both also defensively solid, as the entire Blues team was from start to finish.

That goes without saying when the opposition only breaches the line once, but it was Trbojevic and Mitchell in attack who were a major part of the reason New South Wales were able to skip away with the game almost as if doing it easily. 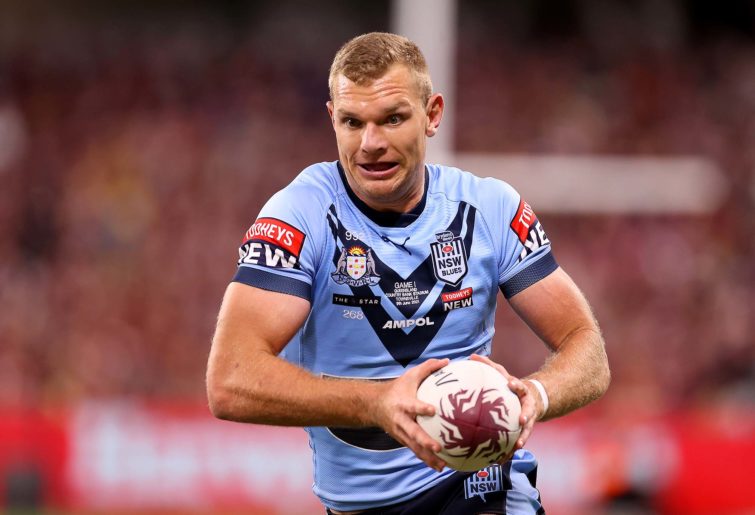 That shouldn’t be the last Origin in Townsville

The ground might be a bit smaller, and the problem surrounding money will be an issue unless the Queensland government decide to play ball again, but Origin in Townsville is an experience that should be repeated in the future.

It’s not something that’ll happen every year, but the crowd were parochial, particularly early before Queensland were blown off the park.

The atmosphere of the crowd was hardly a surprise – for the North Queensland region, it’s an experience which they have never had before, and is possibly one of the biggest ever events to come to Townsville.

The Cowboys in the NRL have one of the most hardened supporter bases, travelling from places as far away as Mount Isa just to get a look at their team run around, and having Origin in the region is almost a reward for the efforts and often sacrifices they make to give the Cowboys and game in the region more generally the dominance it has.

The atmosphere in Townsville also more generally makes the argument that Origin should never be played outside of New South Wales and Queensland. The balance of keeping rugby league’s biggest showcase in the two states against expansion areas is an important one, but it shouldn’t be one neutral game per year.

Origin means too much to fans in New South Wales and Queensland to turn it into something mirroring an exhibition game in non-rugby league heartlands.

Roarers, what did you make of Origin 1? Drop a comment below and let us know.