I took a Norwegian exchange student with me to see the first Anzac Day game between Collingwood and Essendon at the MCG in 1995.

I could not have chosen a better game to advertise the skills and emotion of Australian Rules football to an unvitiated teenager, who went on to play the game at a local level during the remainder of his time in Australia.

Nathan Buckley was superb that day, as he was many, many, times during his 260-game career at the Magpies. He had 30 disposals that day and narrowly missed out on winning the Anzac Medal that was awarded to Saverio Rocca, the club’s champion full forward at the time.

As I did many times during Buckley’s career, I loved his high skill level and his ability to impose himself on the game but even at this early time in my worship of him, I held a grudge against him for being too much the perfectionist.

That is not the way that most players make their mark. It is with grunt and clever one-percenters that can change the course of a game and it always stayed in my mind that Buckley had the chance to do this on Anzac Day, 1995.

The scores were level, with very little time left on the clock and Buckley – in typical Buckley fashion – streamed out of the middle of the MCG with control of the ball.

Reaching the half forward line, he honoured the lead of Rocca with a bullet-like pass to the big Italian.

The Inspector Gadget-type arms of the brilliant Bomber full back, Dustin Fletcher, spoiled the mark, and the subsequent scrimmage meant the game finished in a draw.

It remained my conviction from that day forward that Bucks should have taken a shot for goal!

A magnificent kick, he would have likely nailed it but a point would have done, anyway!

Even in the unlikely event that the ball fell short of the goal-line, the battle between Rocca and Fletcher would have resulted in a U-turn by these players with the momentum all Collingwood’s way!

As you can see, I never forgave Bucks for not playing ugly football at that time, and this feeling remained with me all through his magnificent career as a player and coach.

Bucks did it all at Collingwood, including winning a Norm Smith Medal in a losing team, sharing a Brownlow Medal, winning more Copeland Trophies than anyone and captaining the Magpies in more games than anyone until Scott Pendlebury came along.

His coaching – although it never delivered the ultimate reward – was also above average.

He never lost a game to two of the most iconic coaches around – Mick Malthouse and Kevin Sheedy – and had the better of highly regarded coaches such as Brad Scott, Chris Scott, John Worsfold, Ross Lyon, Simon Goodwin and Chris Feagan in win-loss ratios.

Despite having endured the single-digit grand final losses of 1964 and 1966 (Bob Rose), 1979 (Tom Hafey) and 2002 (Mick Malthouse), I will never concede that 2018 (Nathan Buckley) was not the cruelest, most heartbreaking, and most undeserved of them all.

Thank you, Bucks, for ten years of roller coaster rides and honest assessments at the end of each game.

As not one who judges success by premierships only, I rank you up there with the best players and coaches I have ever had the pleasure of seeing at the Collingwood Football Club.

Eddie McGuire accuses the media of trying to 'get Collingwood'

Eddie McGuire thinks the media are blowing things at Collingwood out of proportion. 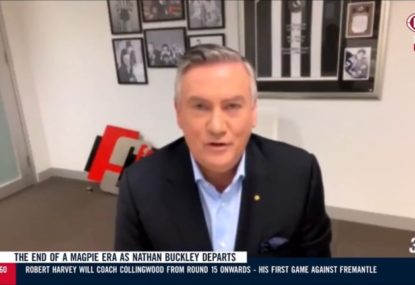 Eddie McGuire accuses the media of trying to 'get Collingwood'

The carnage at the Collingwood Football Club continues unabated. They have owned several news cycles since the end of the 2020 season, none of them for positive reasons.

Outgoing coach Nathan Buckley will bid farewell to Collingwood fans in unusual circumstances with Monday’s game against Melbourne to be played in Sydney.

Buckley stepping down as Collingwood coach

Collingwood coach Nathan Buckley has officially announced he is stepping down from his role at the club.

Buckley stepping down as Collingwood coach