1. James Tedesco – 8/10
Tedesco has had plenty of outstanding Origin performances in the past, and while he wasn’t best on ground as he has been plenty of times before last night, he certainly didn’t let anyone down.

212 metres, a try assist, eight tackle busts, three offloads and he was popping up in attack everywhere. As the entire Blues side was, the Roosters’ custodian was also superb in defence at the back.

2. Brian To’o – 8.5/10
One of the best Origin debuts you’re ever likely to see. Two tries will be the highlight for most, but the running game Penrith’s star winger possesses was expected to be one of the key advantages for New South Wales, and he didn’t disappoint.

He topped the count with 220, but impressively, it came with 90 post-contact metres. In short, he was impossible to handle.

3. Latrell Mitchell – 9.5/10
He may not have officially been awarded man of the match, but he certainly was for mine.

Mitchell had a slower start than his centre pairing Tom Trbojevic, but once he got into the swing of the game, Queensland simply had no answers to the storm which was coming their way. A try-scoring double helps his cause, but Mitchell also had two try assists and double-digits in tackle busts. 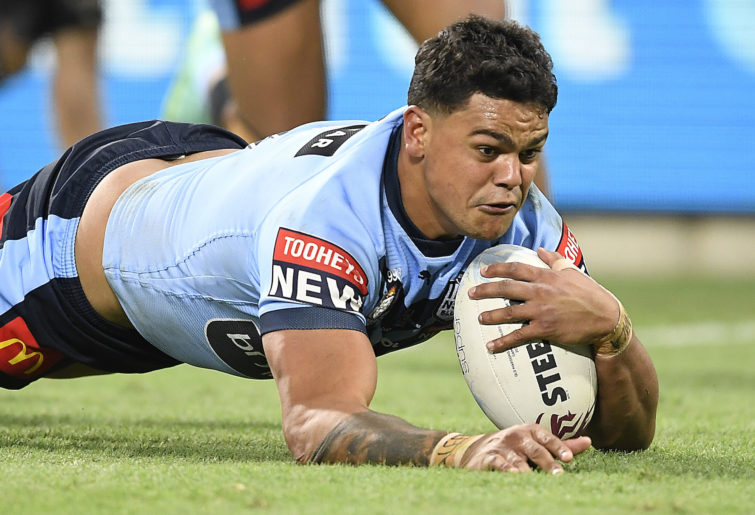 His performance was off the charts, and the only factor marking him down was letting in the only try as Kurt Capewell ran around him. Other than that, Trbojevic was absolutely faultless, involved at every possible moment in all the right ways and generally proving a thorn in the side of the Maroons.

5. Josh Addo-Carr – 6/10
The quietest member of the Blues’ back five, but it’s not as if Addo-Carr had a poor game. It’s simply that the Blues constantly attacked the other edge, not allowing the Melbourne winger a chance to do what he does best.

He still managed to crack 100 metres though, which is more than can be said for any of the Maroons’ back five, while he was also solid in every asking on the defensive end. He made some outstanding takes under the high ball as well.

There were (rightly) plenty of questions over Luai, particularly given his last club performance was very underwhelming against Canterbury, but he was phenomenal for the Blues.

The combinations he built across the field worked from the first minute to the last, and the line break his opportunistic nature in running the ball created was outstanding to watch.

He will play in tougher matches than that, and it’s easy to star when the team is so far ahead, but it’s a promising start at this level.

7. Nathan Cleary – 8.5/10
Cleary too had his best game in sky blue in Townsville despite suffering an ugly looking laceration to the face which, at the time of writing, was rumoured to potentially be a fractured cheek that could rule him out of Origin 2 – although scans will be needed to confirm.

His kicking game was outstanding, and so too was his running of the ball. Maybe the biggest praise that can be directed towards Cleary was the fact New South Wales seemed to lose their edge when he went off, only to gain it when he returned alongside Payne Haas and Junior Paulo.

8. Daniel Saifiti – 8/10
Saifiti set the tone early for the Blues, starting the game in fine fashion, and was the best of the Blues’ starting forward rotation.

With 142 metres from his 15 runs, he had the Queenslander’s backpedalling at various times, creating time and space for Cleary, Luai and Tedesco to go to work.

9. Damien Cook – 7/10
Cook was almost noticeable at times among the carnage dished up by the Blues, but as a hooker in a performance like that, it means it’s a case of job done.

No defensive issues, good service to the forwards and halves and the only two times he did run the ball both were successful.

10. Jake Trbojevic – 6.5/10
Trbojevic was used in an odd fashion by Brad Fittler, playing just the first 22 minutes and then not being sighted again until the final quarter of an hour.

He was solid in both attack and defence while on the park, but it wasn’t a performance that will be causing Queensland sleepless nights. Of course, they have plenty of them to worry about elsewhere.

11. Cameron Murray – 6/10
Murray was a little bit of an unseen player for the Blues, and while he only had five runs of the footy, his defence was rock solid out of position.

It’s a credit to the Rabbitohs lock that despite limited opportunities with the ball, he kept turning up and did the job required of him in a monstrous victory.

12. Tariq Sims – 8/10
The surprise packet of Game 1. Sims was one of the few selections in the Blues’ side which raised eyebrows, but the Dragons second-rower made his spot count.

A superb offload for one of Brian To’o’s tries was just the tip of the iceberg, with Sims making numerous excellent defensive efforts and also running the ball strongly. He has confirmed his spot for the remainder of the series.

13. Isaah Yeo – 7/10
In an 80-minute performance, Yeo was solid without being fantastic. He ran the ball well and tackled hard as he does week in and week out for Penrith. His tackle efficiency was impressive, and on the occasions was able to do a bit of ball-playing, his skills looked crisp.

More Origin 1
» REACTION: Maroons are headed for a 3-0 Blue-wash after insipid Game 1 display
» MAROONS PLAYER RATINGS: Queensland struggle all across the park
» All the talking points from State of Origin 1
» AS IT HAPPENED: Game 1 scores, highlights, result and blog
» Team news for NSW and Queensland ahead of Origin 2

14. Jack Wighton – 5/10
It’s hard to rate someone who barely played a little over a quarter of an hour, but for what it’s worth, Wighton ran the ball efficiently and had enough involvement to let those watching know he was on the field.

With no defensive lapses, you can’t ask for much more than that in the time allocated.

15. Junior Paulo – 7/10
Paulo might have only played 34 minutes, but some of his runs helped to stop any semblance of momentum Queensland were beginning to gain at various points.

Averaging almost 15 minutes per run, no matter how few he had, shows exactly what impact he had in the middle third, while a pair of tackle busts also had the Queensland defence backpedalling.

16. Payne Haas – 8/10
The influence of Haas playing from the bench was always going to go a long way towards determining the outcome of the game, and it’s exactly the way it played out.

While he came on in a leading position which allowed some time to adjust to the pace and ferocity of the contest, the Brisbane-based enforcer made 132 metres from just 13 runs and defended strongly in a 58-minute stint.

17. Liam Martin – 5/10
Like Wighton, Martin didn’t get a prolonged run on the field, but in half an hour put on some good hits in defence which would have rattled the Queenslanders.

He did nothing with the ball in hand though, so it’s hard to rate him any higher.