Gutted up the middle, beaten out wide, having a half-century run up on them, no time, no spark, no energy. Paul Green’s Origin coaching debut could not have gone much worse.

Can the Maroons get themselves back in shape for round two in Brisbane?

8. Christian Welch – N/A
He failed an HIA in the 12th minute after a head clash with Brian To’o and was subsequently ruled out.

10. Tino Fa’asuamaleau – 3/10
Not a lot of impact with the ball in hand, either for yardage, breaking tackles or creating anything for support players into the game with offloads.

He got through a lot of defensive work, but missed a few tackles that kept the blue wave’s momentum going. He really needed to lift after Welch was done for the night, but he didn’t.

9. Harry Grant – 5/10
It’s tough to score Grant for this one. He battled as hard as he could and gave decent enough service to the halves, but aside from a few short bursts from dummy half he had no opportunity, time or space to create anything in attack.

As usual, he got through a stack of defensive work but you can’t ignore eight missed tackles including a whiff on Nathan Cleary late which led to a try, but the game was well and truly cooked by then.

More Origin 1
» REACTION: Maroons are headed for a 3-0 Blue-wash after insipid Game 1 display
» BLUES PLAYER RATINGS: Turbo stars but all NSW players dominate
» All the talking points from State of Origin 1
» AS IT HAPPENED: Game 1 scores, highlights, result and blog
» Team news for NSW and Queensland ahead of Origin 2

11. Felise Kaufusi – 3/10
Kaufusi offered very little in attack and missed a key tackle on Damien Cook which ultimately led to Brian To’o’s first try, then he whiffed on Jarome Luai which ended up being Tommy Turbo’s second score.

Errors didn’t help his night, especially when he lost the ball after the maroons had back to back set restarts and were in a position to do something when the game was still alive.

12. David Fifita – 5/10
He went off for an HIA in the 30th minute and came back for the start of second half. Fifita drove hard but was swamped every time he took the ball which limited his impact. It was almost as if New South Wales had a plan to handle him… 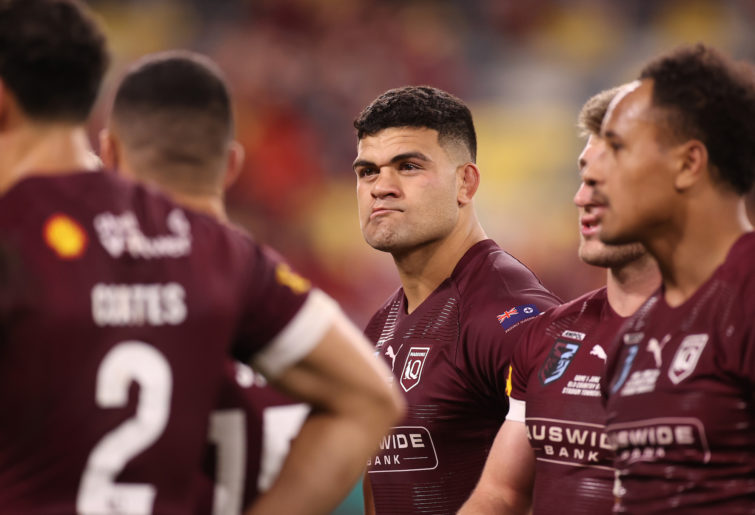 He hit well in defence and couldn’t really be faulted overall.

13. Jai Arrow – 4/10
Attended to his defensive work well, but as the story goes for Queensland, he delivered very little to push his team forward. A nondescript performance when his side needed much much more.

7. Daly Cherry-Evans – 4/10
DCE had absolutely no time to act all night with defenders in his face and alongside that, Cherry-Evans didn’t organise the attack well enough. Too many times there were players all over the place and set plays didn’t seem possible. He only got more room to move when NSW got tired from scoring so many tries.

For what it’s worth, his long kicking game wasn’t bad, with the shorter stuff and aerials pretty much left to Cameron Munster.

6. Cameron Munster – 5/10
He tried to provide the spark for the Maroons but was swamped every time the ball was in his vicinity.

Depending on the whims of the judiciary, Munster might have some issues after being placed on report for a sneaky kick to the midriff of Liam Martin after Martin took him down after a kick.

4. Dane Gagai – 2.5/10
A horror night for Gagai, given an absolute bath by Latrell Mitchell, and anyone else who came his way for that matter, which ended up in seven missed tackles and a comedic defensive partnership with Xavier Coates.

He barely touched it in attack and did even less when he did get it.

3. Kurt Capewell – 4/10
He had a miss on Tommy Turbo for the first try of the game, but if that’s not a mismatch I don’t know what is.

Capewell got his own back with a great try to get QLD on the board, showing some slick sleight of hand to fool the defence and go himself.

Other than that, he ran it pretty hard, broke a few tackles and certainly wasn’t the worst out there, which unfortunately tonight isn’t much of a compliment.

2. Xavier Coates – 2/10
There were some good things for Coates. Let’s get them out first. He ran strongly, broke tackles and was the obvious aerial target for the Maroons.

But let’s not sugar-coat things. Coates had a stinker. Tormented all night by the Blues on the ground and in the air, he learned what Origin is all about.

He got caught dawdling in the line which allowed Tariq Sims to throw a pass to a completely unmarked Jarome Luai and Brian To’o, which ended up as To’o’s second try.

That was compounded by a dropped bomb which led to a Latrell Mitchell try. Coates has plenty more in him than what we saw, but Origin 1 wasn’t great.

18. Kyle Feldt – 2/10
It was quite an interesting night for the Townsville local. Kyle Feldt’s game consisted of giving away a stupid escort penalty from a harmless kick, which led to New South Wales scoring the game’s opening try down his side.

Feldt then started a ‘fight’ with Cam Murray right on halftime, and his second 40 was basically invisible apart from being put on report for a dirty shot on the same player.

5. Valentine Holmes – 5/10
Holmes ran strong and led the Maroons for metres gained with 126, but he was under siege all night and barely got a chance to show what he was capable of. 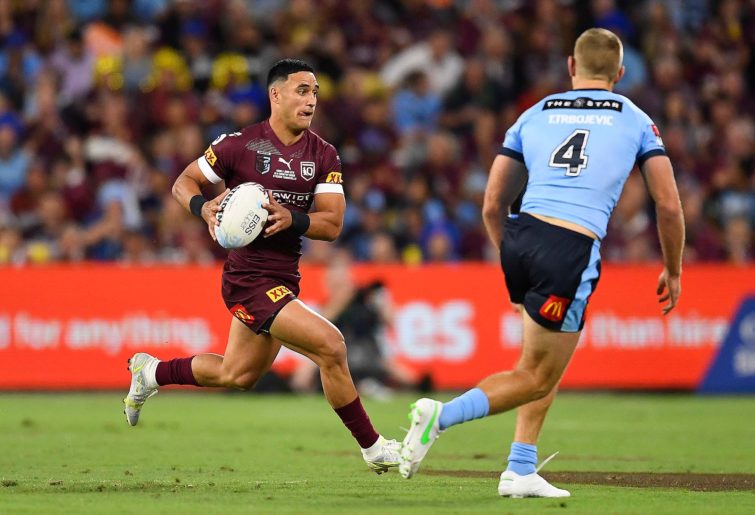 Holmes battled under the high ball, which was drawing a crowd all night and didn’t leave much room to move, but at least he looked like he was trying to make things happen even under that immense pressure.

14. AJ Brimson – 3/10
I feel bad about this one. AJ Brimson is a dynamic attacking fullback who can break lines, feed support players and score points.

So what did Maroons coach Paul Green do? Kept Brimson on the pine for 50 minutes and brought him on with the score 26-6 and the game done and dusted.

Not only that, Brimson was played at hooker, where the only thing he did was get himself squashed by Daniel Saifiti as the NSW prop scored and the floodgates well and truly opened.

Brimson only played 16 minutes and was completely wasted. What’s going on, Green?

16. Moeaki Fotuaika – 7/10
Fotuaika came on for Welch in the 12th minute and threw himself into everything. He was easily Queensland’s best player.

He made the third-most metres of any forward on the ground behind Saifiti and Haas, pushed forward with intent and stuck his tackles hard in defence.

The one cross on his performance was being placed on report for a late hit on Latrell Mitchell as he set up To’o’s first try. 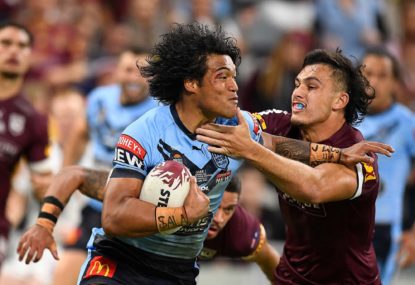 17. Joe Ofahengaue – 4/10
An innocuous game from Ofahengaue, nothing great or horrible. He was late to react on Daniel Saifiti when the NSW prop scored from in close late on.

He at least looked like he was trying to push ahead and get his team going, whether that was successful or not you can judge by the scoreboard.

15. Jaydn Su’A – 3/10
Came in after 30, only played 35 minutes, got bugger all of the ball and only made 11 tackles. There’s not much else to say here, Su’A like his teammates just couldn’t create anything in attack or hit hard and stick in defence.

21. Ben Hunt
Possibly the best performance by an 18th man in Origin history. Hunt did very well to steer clear of the carnage.