How the Hawks are planning their return to relevance

The Hawks are setting themselves up for another sustained attack on Premiership contention.

A popular narrative flying around the media circles coaching uncertainty, trading star players and hierarchical volatility, yet the way in which Alastair Clarkson and his staff a putting together a squad is cause for concern for the rest of the competition.

Of course, the level of patience will dictate the coaching future, and the buy-in of the supporter base.

But if last week’s mid-season draft and trade murmurings are anything to go by, things won’t be bleak for too long at the Hawks.

When introduced, the mid-season draft may have been designed to cover injuries, and to give opportunities to star state league players, but some clubs have been able to use it to their long-term advantage.

Of course, Hawthorn’s first pick in the draft, Jai Newcombe, fits the bill of an overage player who excelled in the VFL, while Jackson Callow was one of the unlucky players to miss out on selection in the 2020 draft. If developed and used properly, Hawthorn have found two 200-game players for free that fit perfectly into the squad they want to build.

At 20 years of age, Newcombe has taken strongly to the VFL under Sam Mitchell, averaging 23 disposals, seven tackles and six marks a game. It has earned him an AFL debut immediately.

The beauty of Newcombe is his exposure to senior footy growing up, and the powerful nature of his extraction game can perhaps be exploited better than James Worpel’s in recent seasons.

In Callow, the Hawks land a strong key forward that can have an immediate impact at just 18 years of age at time of writing, that won’t be outmarked and is one of the smarter forwards at his age aerially and with his leading patterns.

For Tasmania in the NAB League in 2019, he averaged 14 disposals, six marks and kicked 24 goals in 14 games. By now, many would have heard of Callow’s SANFL performance for Norwood against the Crows’ reserves, where he finished with 24 disposals, 11 marks and 3.7.

Adding these two encouraging talents to the list has been another big step in the right direction of a team that already has the skeleton in place of what the Hawks want from their squad.

At their best, Hawthorn had the best kicking team in the competition, one of the stronger clearance units and a forward line that was as damaging in the air as it was dangerous at ground level.

Intercepting was a key feature of the game and the rotation of players between both flanks and the midfield allowed them to be strong runners and to get the ball forward well.

It was a group that had been built on smart recruiting and values, with a clear identity. Players like Paul Puopolo, Isaac Smith, Ben Stratton were mature-age recruits, while the likes of Brian Lake, Brent Guerra, Josh Gibson and Jack Gunston were recruited cheaply and with an intent to fit straight in.

There’s an eerily familiar feeling to the recruitments of Newcombe and Callow, and to a lesser extent Lachie Bramble as a supplementary player in the preseason.

2020 was the first time the Hawks had taken a top-10 pick in well over a decade and 2021 will have the team seeking further opportunities to select elite talent.

For a number of seasons, it looked like Hawthorn were trying to hold on for one last onslaught, hence the staggered recruitments of Jaeger O’Meara, Chad Wingard and Tom Mitchell.

Indeed, O’Meara and Mitchell are now being spoken of as potential assets to flip for draft picks, but in the meantime, they have acted valiantly as pieces that have kept the team afloat for a while, although it may have been to their own detriment.

Of course, 2021 looks quite grim for the club, who will no doubt be fighting for the wooden spoon.

Considering Hawthorn are extremely guilty of over-possessing the ball, ranked fourth in the competition for disposals, it’s actually quite impressive that they’re ranked sixth for disposal efficiency, going at 74.5 per cent.

Ranked 13th for intercepts and 17th for metres gained however, it’s clear that there is an overall disconnect from a team that is trying to blood young talent while the elder statesmen still try to play relevant football.

Obviously, the Hawks are undergoing a transformation that every single club tends to go through, where the strengths are minimal and the playing group, ultimately, needs to be adaptable and willing to learn through disappointment, a trait that is instilled in any winning culture.

Established players need to be pushing this narrative too, instead of fighting against it, and having the captaincy on Ben McEvoy is the right way to go about it.

It does seem that overall, we have finally reached where Hawthorn are ready and mature enough to capitalise on their situation in a manner that could see development fast-tracked, particularly if they can land a first-round pick for a Mitchell-type of player.

Hawthorn do, in fact, have solid young talent in each area of the ground, despite allegations suggesting otherwise. Many hold enormous grudges against the Hawks due to their successful era, which can lead to biases being the main reasoning for criticising the team in some areas.

The Hawks have strong potential players in each key area that you’d want from your team, and have senior players, albeit some maligned, that are excellent role models to assist, which is the ideal formula for building a squad.

Ned Reeves has broken into the team and unlike perhaps any ruckman the Hawks have had in the past decade, is monstrous in stature with a clear hitout advantage and good attack on the ball.

Early VFL signs in particular are somewhat comparable to an early Max Gawn, who took a long time to get going, and the fact Reeves has a mentor like Ben McEvoy is a blessing.

We will get to see Denver Grainger-Barras soon, and when we do, it will become quite obvious that Hawthorn secured an elite prospect with their first pick.

Grainger-Barras is the perfect player to build future defences around, with the way he defends reminiscent of Jacob Weitering, in that his 19-year-old slighter frame is only disadvantageous in the sense that he will need to purely rely on his elite reading of the play and closing speed to win against the stronger key forwards early in his career.

He’ll fill out, and the Hawks will have their centrepiece.

Throughout the backline, Hawthorn will have a mix of Will Day, James Sicily, Blake Hardwick, Jack Scrimshaw, Changkuoth Jiath and Jarman Impey, all of whom are young and have unique strengths to quickly eradicate the current issues in interception and metres gained.

Prospects in attack look brighter already with Callow’s addition, thanks to the early season form of Mitch Lewis and Jacob Koschitzke, while the VFL form of Emerson Jeka will excite many. 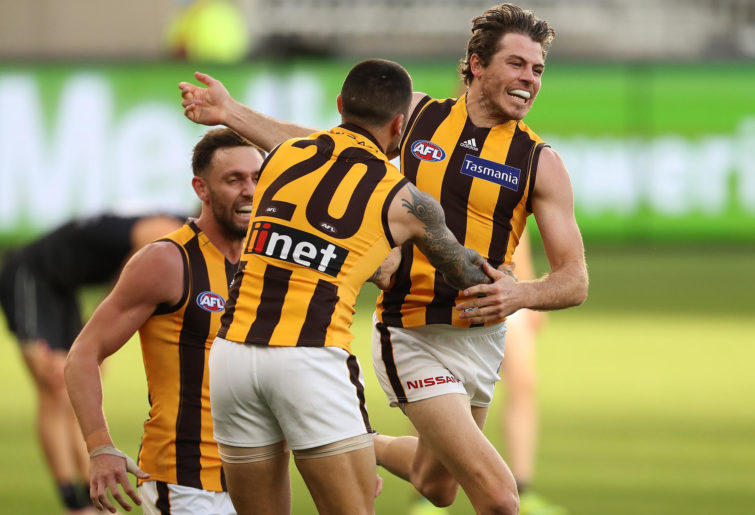 Having Jack Gunston and Luke Breust as stalwarts with success in different roles and an understanding of team chemistry only proves to assist development.

Fans of the Hawks will know that the club needs to improve the variety of midfielder at the club, but the aforementioned there are young players that can develop into strong contributors like Newcombe, Worpel, Finn Maginness and Connor Downie.

Pending natural development and perhaps rapid or even unexpected growth from rookie listed players and other fringe types, the current Hawthorn squad isn’t as devoid of talent as many will want, and even wish you to think.

One would suspect that as the young players look to develop together, Hawthorn will look to bolster their midfield from within, and the explosiveness of Impey and Jiath will give that extra edge.

Chad Wingard is the perfect mentor to guide Tyler Brockman.

When assessing rebuilding squads, it’s important to realise the potential for high turnover among the fringe AFL players, but the Hawks currently have a few playing across the forward line who are tackling hard and getting enough of the ball to show signs of future relevance as depth.

Also crucial to understand is that, much like in the past, building the future can still involve recruiting from other clubs, and scouring the state leagues for ready-made players seeking opportunities.

Because to be successful, there must be a balance, and the Hawks have been the best exponent in left-field recruiting.

It behoves coach Clarkson to keep the veterans around during these trying times.

McEvoy turning into a forward/ruckman is perfect to assist the development offensively, perhaps it could allow for flexibility with Jacob Koschitzke, if the Hawks want to flip him back into defence.

Gunston and Breust have been heroes who hopefully stick around but could be moved.

Mitchell feels more expendable than O’Meara in terms of a return and the fact the latter could well be another captaincy option in the future, and at the very least can be versatile in his role within this midfield.

A lot will rely on Sicily’s return to full fitness, whether it needs to be in attack upon immediate play to action remains to be seen, but as the club’s best player, he will set the standards for the future.

Frost is more than just the writer’s favourite. He has proven to be a spark out of defence and posting quite good key defensive numbers, enough to hold the tide while Grainger-Barras develops. 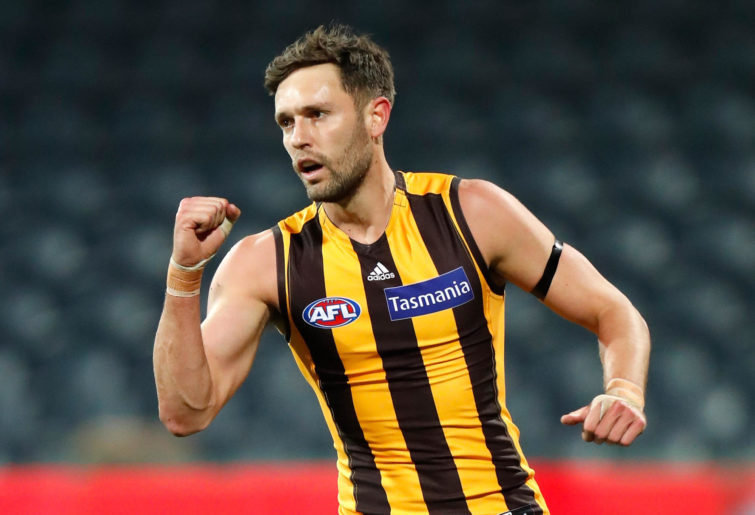 Truthfully though, 2021 will be dire the whole way through, and there’s potential for 2022 to be similarly difficult.

Yet the way in which Hawthorn is building its squad, and the fact there’s a greater focus on youth, it feels like the rise will be more than just a gradual progression from bottom four to top eight.

A top three pick in this stacked draft is excellent, which is why grabbing another first-rounder or couple of second-rounders would be ideal.
Having high picks for the next couple of drafts rights the wrongs of the stagnance of the past couple of years, without the middling out faze to head into.

Many have defaulted to thinking this Hawthorn team will commence a prolonged stint at the bottom of the ladder, without great hopes in sight.

Whether it’s Clarkson, Mitchell or another up-and-coming type of coach, Hawthorn are building nicely, irrespective of people’s opinions on the club.

It’s an unfamiliar feeling for Hawthorn fans to be down the bottom given modern history, but the followers of the brown and gold should remain positive, holding out hope that the right moves are being made.

But it won’t be long until the Hawks are back in contention, much to the dismay of the opposition fan.

By 2024, it wouldn’t surprise to see this team back in the finals fold and push for greater glories.