The Blues have secured their place in the inaugural Super Rugby Trans-Tasman final with a 31-21 victory over the Western Force in Auckland.

But the win wasn’t as pretty as it could have been ahead of next week’s title decider against the Highlanders back at Eden Park.

The Blues were unable to score a second-half try after taking a 28-0 lead into the break.

Despite enduring a winless campaign, the Force were Australia’s most consistent outfit and displayed their resilience once again on Saturday night.

“It was a hard-fought game and when you’ve got a home final you’ve got to look forward to that,” said Blues captain Patrick Tuipulotu.

“We were happy with the first half. It’s fair to say we didn’t turn up for the second half.

“We knew the Western Force were a team that fight to the end and it’s quite disappointing for us to finish like that.

“But we can’t dwell on it too much. We’ve got to look forward to next week and be grateful that we have another week together.”

Tuipulotu said another half-hearted effort wouldn’t be good enough to win the title.

“We’re always struggling for a perfect day, 80-plus (minutes) and against the Highlanders we know they’re a dangerous team.

“They go 80-plus as well. Look, it was a hard-fought game and we get a home final and we’ve got to be happy with that.” 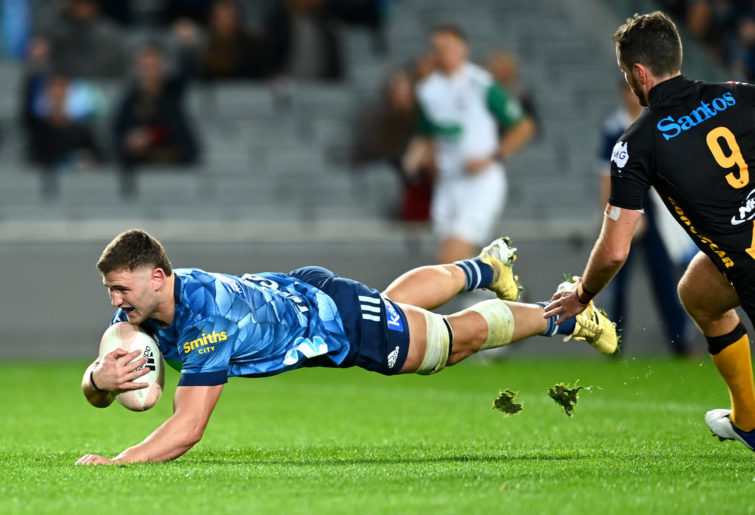 Dalton Papalii dives over to score a try. (Photo by Hannah Peters/Getty Images)

Force captain Ian Prior was proud but disappointed.

“I’m really proud of the fightback,” Prior said.

“They’ve been pretty special, this group this year. I think we’ve earnt a bit of respect across the ditch.

“But you can’t give away 28 points in the first half and expect to get the win.

“Really proud of the fightback but we’ve got a lot of areas to work on.”