The Czech world No.33 paid an emotional tribute to her late mentor Jana Novotna after defeating another first-time finalist, Russian Anastasia Pavlyuchenkova, 6-1 2-6 6-4 in Saturday’s showdown.

The 25-year-old looked to the skies to honour former Wimbledon champion Novotna – who died of cancer aged 49 in 2017 – after her victory.

“When Jana was passing away, pretty much her last words to me were ‘just enjoy, and just try to win a grand slam’,” she said.

“I know that from somewhere, she’s looking after me from up there.

“She was such an inspiration for me. I just really miss her but I hope she’s happy right now – I’m extremely happy.”

Krejcikova, the first Czech woman to lift the French Open title since Hana Mandlikova 40 years ago, was also thrilled to collect the Coupe Suzanne Lenglen from another of her heroines, Czech-born legend Martina Navratilova.

And her historic weekend could get even sweeter on Sunday when she seeks her third grand slam women’s title with partner Katerina Siniakova, in a final against last year’s singles champion Iga Swiatek and Bethanie Mattek-Sands.

No woman has completed the singles-doubles set at Roland Garros since home favourite Mary Pierce in 2000. 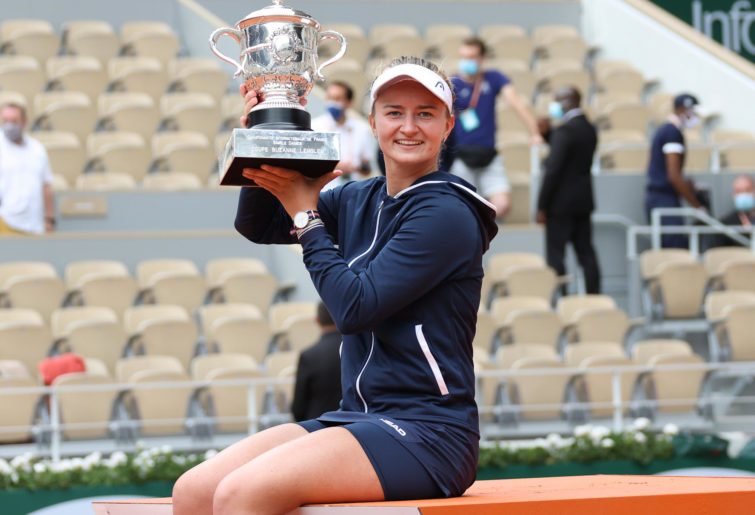 Playing in only her fifth main draw singles, having 15 times failed to get through qualifying, Krejcikova eventually took control of a see-saw contest against Pavlyuchenkova, who needed treatment for a leg injury that she later revealed had been troubling her all tournament.

Pavlyuchenkova, hoping to complete her own tortuous journey from wunderkind to 29-year-old champion in her 52nd grand slam, picked up a thigh problem, connected to longer-standing left knee issues, at the end of her victorious second set.

Krejcikova, ranked 115 when she came to Roland Garros nine months ago for the 2020 edition, regrouped brilliantly, reprising her masterful first-set form.

The pace and angles of her elegant groundstrokes allowed Pavlyuchenkova no rhythm and it was hard to imagine it was the same woman who had suffered a tearful panic attack before her last-16 match against Sloane Stephens, thinking she was not good enough.

Yet Krejcikova’s sports psychologist put her in the perfect frame of mind this time.

“We spoke about it a lot and I just knew that when I’m going to enter the court, I’m just not going to be panicking anymore.

“It’s something I have always dreamed about. I was just telling myself it would be really nice if I can get a grand slam in women’s doubles, mixed and singles.

Pavlyuchenkova was much more aggressive in the second set but when serving on set point at 5-1, she jarred her left leg during a rally.

She needed a medical timeout after saving that game and resumed to seal the set, but the knee trouble had taken its toll.

“In the third set during the (third round Aryna) Sabalenka match, I said to myself, ‘if I win this, I’m going to cry’,” she said.

She battled on and saved two match points at 5-4 and another when Krejcikova double faulted on the verge of victory but she sealed victory when the Russian’s backhand flew long.