Seven talking points from NRL Round 14

Even the round after Origin couldn’t bring more than a single upset, with the NRL season rolling into the second half. Here are my talking points from Round 14.

Josh Papalii will walk back into the Queensland Origin team
As much as I want to sit here and rabbit on about the dreadful decision to send off Kobe Hetherington, talking about referees is something I don’t love doing, so let’s get on with the real footy talk.

On a freezing cold night in Canberra, the Raiders proved they could still win rugby league matches and attack as they did last year against teams like the Broncos.

But Josh Papalii also made his return, and for most, that was the key storyline to follow out of the clash.

Following Queensland’s destruction in Origin 1, where they were outplayed in all areas, it’s clear they need a lot more go forward, and Papalii resuming as if he never left will give Paul Green an excellent alternative when the series shifts to Brisbane.

Papalii had 178 metres in 50 minutes on Saturday, but with three offloads, three tackle busts, a line break and a try, it’s the extra impact he can bring to the Maroons which has the potential to flip the momentum of the Origin series.

Particularly if Christian Welch can play bigger minutes in Game 2, a front row rotation of Papalii, Welch and Moeaki Fotuaika looks far more fearsome than what the Maroons dished out in Game 1.

With a slightly easy run of games coming up as well, the Raiders will be keen on Papalii staying fit and doing what he did to the Broncos on Saturday. A march up the table could follow with off-field issues starting to sort themselves out.

Jake Averillo and Matt Burton will take Canterbury in the right direction
The Bulldogs were able to record just their second win of the season on Monday afternoon over the woeful St George Illawarra Dragons, in the process going past 20 points for the second time.

While the return of Jeremy Marshall-King had plenty to do with it, his service, spark and creativity out of dummy half putting the Bulldogs on the front foot time and time again, it was Jake Averillo who stole the show.

After kicking for over 700 metres last time out against the Panthers, he had over 500 metres off the boot again on Monday, while his running game was also on point, coming up with a couple of tries and plenty of hands in the lead-up to tries for teammates.

It wouldn’t be hard to call it the Bulldogs’ best performance of the season to date, and if Averillo continues that level of form, to go with Marshall-King’s performance and the added influence of Josh Jackson back in the middle third, things could continue to turn around for the Bulldogs ahead of 2022 and the arrival of Matt Burton.

While Burton hasn’t shown a whole lot in the halves over the last fortnight at Penrith while Nathan Cleary and Jarome Luai sat out, a full pre-season in the position and in the Bulldogs system, working on a combination with Averillo could bear fruit for the blue and white next season.

Both Averillo and Burton have elements of control and running in their game, and it will make the Bulldogs an equally difficult prospect on both sides of the park.

It’s certainly difficult to see them playing finals footy next season given the speed that turnaround would need to happen, but Averillo and Burton are a halves combination the Bulldogs can build around, and the proof is there as the men from Belmore ran over the top of the Dragons on the Queen’s Birthday yet again.

So, Manly can play without Tom Trbojevic
Who would have guessed?

The Sea Eagles came crawling out of the blocks on Friday without Tom Trobjevic, who was rested following an unbelievable Origin performance against Queensland, but once they found their groove, it was one-way traffic.

Now, it must be noted they were playing the Cowboys who have won just a single game away from Townsville so far this year, but it doesn’t really matter who the Sea Eagles are playing.

A win without Tom Trbojevic was about as likely as pigs flying before Friday.

Not only did the Sea Eagles win, but their attack, playing with real confidence, ran up 50 points on the hapless men from Townsville. It should go without saying that Daly Cherry-Evans and Kieran Foran were both exceptional, but they had tries all over the park and never took a backward step throughout the contest.

The fact Reuben Garrick ran for over 300 metres is testament to the Sea Eagles’ willingness to spread the ball and play with that confidence, while the forwards dominated the Cowboys’ pack.

It was a complete performance, and while you’d like to see them do it without Tom Trbojevic against a stronger opposition or even away from home, it’s a start.

And Manly desperately needed a start without their star, given the chances of him being injured or not playing over the coming weeks due to Origin. 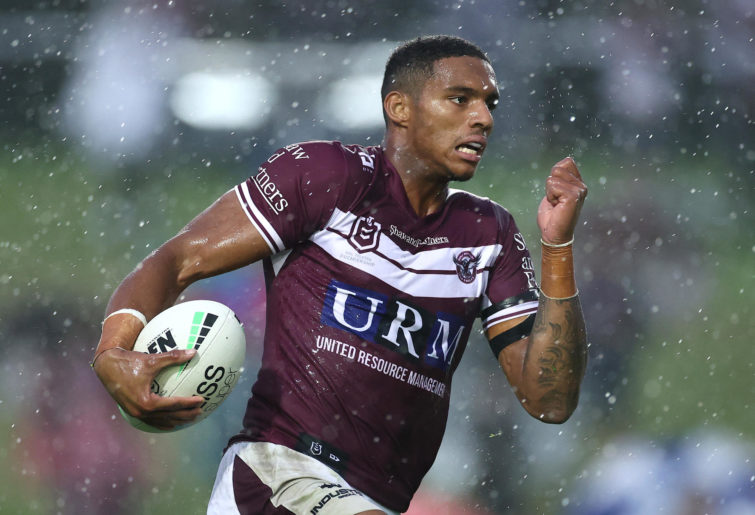 But he is exciting, and even coming back from a horrid run of injury, he is still a game-winner on his day, as Sharks fans were reminded yet again on Friday in a tight, exciting victory over the Panthers.

While the Cronulla side as a whole deserve credit for the way they went out to an 18-0 win against a fired up Penrith side looking to hit back from the embarrassment of a loss to the Tigers, it was Johnson who led the attack.

With a try of his own and a couple of line break assists, it won’t come as a surprise to anyone to find out the Sharks are at their best when Johnson is.

However, he is just the latest in a line of talented players who have been told they won’t be getting a contract at their current club next year, and plenty could use a man with the talent of Johnson.

Put him in the right halves combination alongside a game manager, and it could see Johnson able to play the way he did during some famous performances during his time at the Warriors.

Alongside a player like Adam Reynolds at the Broncos, Ben Hunt at the Dragons, Daly Cherry-Evans at the Sea Eagles or even Mitchell Pearce in Newcastle, it could be the missing link those clubs are searching for.

It would be mad, and frankly quite disappointing, to see Johnson not land a contract in the NRL next season.

Ken Maumalo will be an enormous assistance to the Tigers
It’s something of a surprise to see Ken Maumalo shipped off to the Tigers mid-season, but fans of the joint-venture will be excited after being given a reminder of Maumalo’s immense talent in his final game for the Warriors.

Formerly a one club player, Maumalo has been a part of the fabric at the Warriors for some years now, and while he has fallen out of favour substantially, his late call-up for Sunday’s game against the Storm saw him run more metres than any other Warriors play and score all three tries for the club.

In what has been a difficult run with so much time on the road for the Auckland-based club, Maumalo has often been one of their consistent lights, this being his second hat-trick (funnily enough against the same club) after crossing for five tries in his eight games last year.

During the years prior, he was often touted as one of the best wingers in the competition, albeit flying slightly under the radar due to playing across the ditch.

At 26 years of age, Maumalo should be entering the prime of his career, and a move to the Tigers, who currently are relying on James Roberts to play on the wing, may be exactly what he, and the club, needs.

Latrell Mitchell is hitting his potential, and fullback is becoming his best position
Two unreal performances in four days for Latrell Mitchell. That would be the best way to sum up his slightly chaotic week, with a (in this columnist’s opinion anyway) man of the match performance in the opening Origin match, followed up by a big game for the Rabbitohs back in the number one jumper on Saturday.

The Rabbitohs might have gotten the better of the Knights, but it’s disputable they would have without Mitchell, who had the most run metres for his side, but has also had his combination with Alex Johnston on the left-hand side explode in the past month. 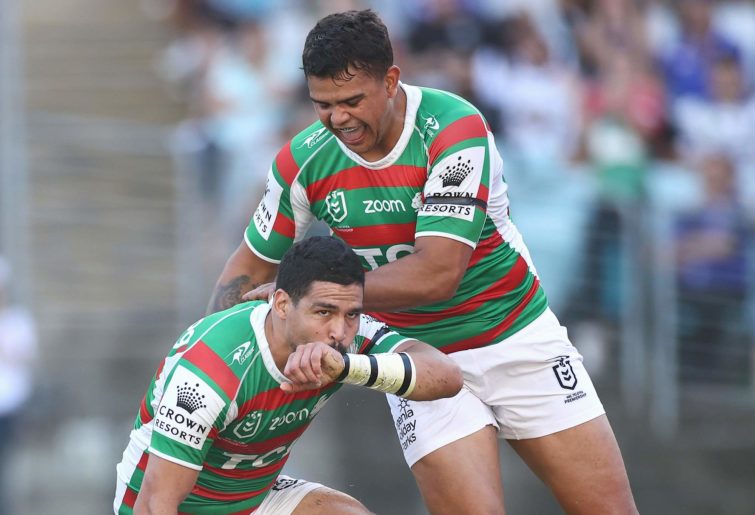 His return from injury seemed to spark something in the Rabbitohs, and while it started with a loss to the Panthers, their victories over the Eels and Knights have been nothing short of outstanding.

The question will always follow Mitchell about where his best position is, and performances at Origin level will only keep them running, but his efforts for Wayne Bennett’s side go to show he is now fully in control of playing fullback.

While at times he is still out of defensive position, or fades out of games, that wasn’t evident backing up from Origin, and that level of performance will see him continue to improve his status as one of the game’s best players.

The sky is the limit for Mitchell at fullback.

Jared Waerea-Hargreaves must continue to lead the Roosters
New Zealand international prop Jared Waerea-Hargreaves doesn’t always get the greatest wrap from the media. A hard-hitting, old-style forward who has no problems getting into a scrap and dishing out aggression, he is the sort of player every premiership-winning team needs.

While his performances aren’t always top-shelf, and he does sometime bring the Roosters unstuck with a lack of discipline, he was absolutely superb on Saturday.

In what ended up being a thrilling one-point win over the Titans in a very high-scoring game, Waerea-Hargreaves made more tackles and running metres than any player on the paddock, churning out a full 80-minute performance.

It’s the second game in a row he has played the full 80, and while his fitness allows him to do it, it’s not by any stretch easy for a prop in this fast-paced era of the game to play that amount of minutes, and to do them with such efficiency.

The Roosters have plenty of youth in key positions thanks to injuries, and someone like Waerea-Hargreaves cleaning up his discipline and churning out big minutes like that can keep the tri-colours in the premiership picture, even with their casualty ward.

Roarers, what did you make of Round 14? Drop a comment and let us know.