It took me a while because I was trying to come up with a good opinion about the subject, given that opinions are, generally, regarded as an integral part of opinion pieces.

And I certainly had an opinion on him when it was reported he had declined induction to the AFL Hall of Fame.

Whether my opinion was interesting enough to justify an article… Well that’s a different question.

While trying to sort out my own opinions on Adam Goodes, my mind started to drift. It drifted to many times and places, but one in particular: Adelaide, 2003. The qualifying final.

That day the Swans – a scrappy young bunch of bouncy upstarts fast-forwarding their club’s rebuild – were given next to no chance against the imposing Port Power, the minor premiers who seemed destined for even greater things. On their home ground, the Power were expected to overwhelm the brave young Bloods.

But they didn’t. In fact, in the first half, Sydney absolutely brained Port. They ran over the top of them like a steam train over a stoat. The lead ballooned to over 40 points at one stage. The Power came back hard late, but the exhausted Swans hung on desperately in the final quarter to record an astounding victory.

From that day, two images stick indelibly in the mind, as strong now as they were in the moment. The first was Brett Kirk being ironed out by a fearsome bump from Byron Pickett in the centre square, and immediately bouncing back to his feet like an invincible mop.

The second was Adam Goodes being… Everywhere.

His game that day was football at a level to which few human beings can ever aspire. He flew spring-heeled in ruck contests, he leapt and dived for marks, he hurtled into contests like a reckless pinball, and came gliding out like a swallow with the ball in his hands.

He swept back to repel enemy attacks, he bobbed up in the forward line to split the defence, he flew through the midfield and bounded out of the back half to spearhead Sydney’s assault on the minor premier’s fortress.

He won the game and then he saved it and he did it all with the breathtaking grace that he brought to 372 games across 17 years.

He won the Brownlow that year, and another three years later. In 2005 he won a premiership with the Swans, and in 2012 another. He won three best-and-fairest awards, four All Australian guernseys, and a Rising Star medal. He was chosen for Victoria in 2008, and for the Indigenous Team of the Century in 2005, before his career was even half over.

His statistics are monumental: you don’t need to have seen Adam Goodes play to know that he was some kind of footballer.

But if you did see him play, ah, you were lucky. He played with such freedom, such joy. He did things small children dream of doing in their backyards. His athleticism was phenomenal, his touch with the ball sublime. That final against Port Adelaide was just one occasion when he astonished with his ability to make everyone else on the ground seem slow and dull-witted by comparison.

For 17 years he gave the AFL not just talent but commitment and love. He was preternaturally skilled, yes, but also as wholehearted as anyone could wish from a footballer. Nobody could run as far and as long as he did that day in Adelaide – and so many other days – without total and utter dedication to the game. 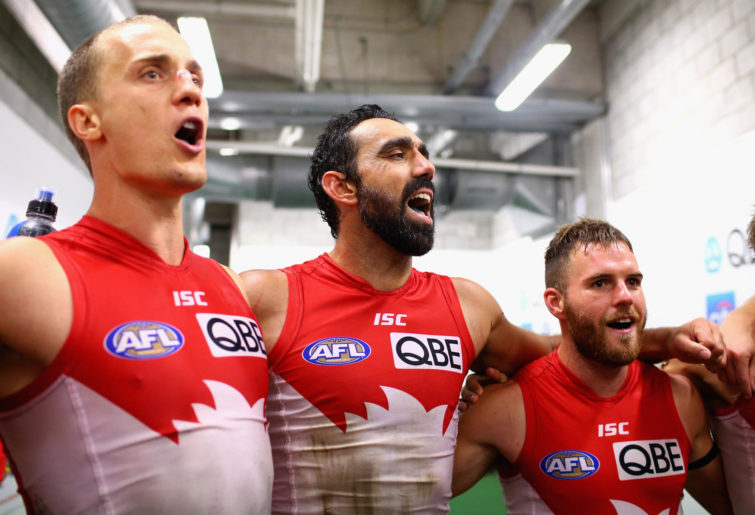 Other people have, and have always had, different opinions on Adam Goodes. When he was playing, when he retired, when he starred in those docos, when he turned down the Hall of Fame, different people thought different things.

But when I let my mind drift, and I see him sprinting down the SCG, ghosting through the packs, soaring over his opponents’ heads and threading the goals, I can’t help thinking our opinions don’t matter much. And I don’t want to argue with anyone whose opinion differs from mine.

All I would ask of those people is to think, like I am, about the man we watched put an unforgettable mark on the game of football. Remember the way he played, the way he threw himself into every game, the single-mindedness with which he chased excellence.

Remember him lifting his team to win games off his own boot, remember him celebrating premierships, remember him sinking to the ground, spent and shattered, after just missing out.

Think about that man, and what you saw him achieve. And now think about the fact that is the same man who has now declared the game he played for the better part of two decades holds no joy for him. He wants nothing to do with it. He doesn’t want to revel in the glory days or be celebrated for his accomplishments.

I won’t argue with your opinion on Adam Goodes. I’ll just ask you to think about that, and what it means for a man who did what he did as a player to be doing what he’s doing now.

I’ll ask you to think about what it means for all of us, and whether, when this happens, the world might not be a colder place than we always thought it was.