The much-awaited final of the inaugural World Test Championship between India and New Zealand is set to commence at the Rose Bowl in Southampton from 18th June.

The two teams have contested 59 Test matches so far, with India winning 21 to New Zealand’s 12. As we look forward to the battle royale, here is a look back at ten memorable moments from the 65-year-old Test history between the two teams.

A record opening partnership – Fifth Test, Madras, 1955-56
The first series between the two teams ended in a 2-0 win for India. The final Test at the Nehru Stadium featured a new record for the opening stand in Tests, as Vinoo Mankad (231) and Pankaj Roy (173) raised a mammoth 413 (the record stood for 52 years).

India’s first overseas series win – Fourth Test, Auckland, 1967-68
The 1967-68 tour of New Zealand was pathbreaking for India. In the first Test at Dunedin, they registered their first overseas win. Coming into the final Test at Eden Park, they were ahead by 2-1 and went on to notch a clinical 272-run win for their first series success on the road.

New Zealand were bowled out for 140 in the first innings and 101 in the second, with off-spinner Erapalli Prasanna taking four wickets each time.

With India left to chase 277, Howarth took another 5/34 to bowl New Zealand to victory by 167 runs. The three-match series was drawn 1-1.

The Bracewell and Hadlee show – Second Test, Bombay, 1988-89
New Zealand were reduced to 158/8 before John Bracewell scored 52 from number nine to steer the total to 236. The great Richard Hadlee built on this with a haul of 6/49 that gave his team a two-run lead.

Smith sets Eden Park on fire – Third Test, Auckland, 1989-90
Leading the three-match series 1-0, New Zealand had slipped to 131/7 when Smith joined Hadlee (87) for a stand of 103. But it was during his ninth-wicket stand of 136 with Martin Snedden that the wicketkeeper went into overdrive.

By the time he was last out at 391, he had hit a blitzkrieg 173 (the highest Test score by a number nine) in 136 balls with 23 fours and three sixes, an effort that was crucial in securing a draw.

India’s first-day disaster – First Test, Mohali, 1999-00
When Stephen Fleming decided to field first, no one would possibly have foreseen the drama to follow, even though the conditions were conducive for New Zealand’s seamers. As it happened, Dion Nash (6/27), Chris Cairns, and Shayne O’Connor combined to roll India over for 83 in just 27 overs – the score read 38/7 at one point. However, India fought back to draw, putting up a contrasting total of 505/3 in the second innings.

Four innings in one day – Second Test, Hamilton, 2002-03
A seaming track in this wet affair (the first day was washed out) provided only the second instance of parts of all four Test innings in a day – the third day saw the fall of 22 wickets.

Moreover, in a Test first, both sides were dismissed for under 100 in the first innings. India were bowled out for 99, to which New Zealand replied with 94. The Black Caps had the final say, chasing 160 to win by four wickets and seal the rubber 2-0.

Gambhir leads a great escape – Second Test, Napier, 2008-09
New Zealand signalled their intention of drawing level by amassing 619/9 (Jesse Ryder 201). When India were made to follow on 314 in arrears, more than two days still remained. Southpaw opener Gautam Gambhir dug in and battled for 643 minutes in compiling a gritty 137, which, together with VVS Laxman’s 124*, guided India to the safety of a draw. India went on to win a series in New Zealand for the second time.

Harbhajan Singh came in at this stage and put on a match-saving 163 with Laxman (91) en route to a defiant 115, his maiden Test century. For good measure, the off-spinner scored another ton in the second Test.

McCullum’s monumental magnum opus – Second Test, Wellington, 2013-14
When captain Brendon McCullum was joined by BJ Watling (124) after lunch on the third day, New Zealand were behind by 152 with five second-innings wickets left.

By the time they were separated, they had added 352, a sixth-wicket record. McCullum proceeded to score 302 – the first Test triple for New Zealand – after having batted for nearly 13 hours. His marathon spurred his team to 680/8 and a series-clinching draw. 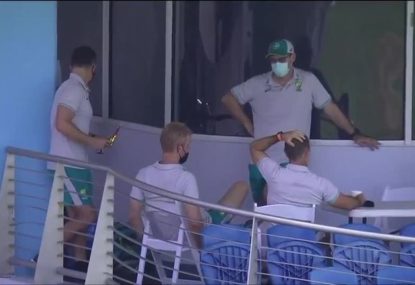