When I look through the list of the 217 players who have represented Queensland in Origin since it kicked off in 1980, I see three types of Queenslanders emerging.

First, there are those who have been adopted by the Deep North, either because the Queensland selectors felt that they needed a home, or perhaps for reasons of expediency.

You know the usual suspects here – Greg Inglis from the NSW northern rivers, Billy “Queenslander” Moore from Tenterfield, PNG’s favourite son Adrian Lam, and throw in a couple of Kiwis including Brad Thorn and Tonie Carroll.

They have now all passed into Queensland origin folklore, and represented their adopted state with pride. Anyway, I hear you say, NSW can’t complain, as they’re just as carefree when it comes to origin eligibility. No argument there.

The second, and by far the largest group, are those Queensland Origin players who left their home state at some point in their careers for fame, glory and dollars.

They not only built successful careers for themselves either interstate or overseas, but also have greatly contributed to the success of their destination clubs.

Players like Cameron Smith, Billy Slater and Cooper Cronk were the heart and soul of the Melbourne Storm, Dale Shearer was a success wherever he went, the immortal Queenslander Arthur Beetson was a Balmain legend, and Queensland stalwarts like Gorden Tallis and Johnathan Thurston got their first grade starts in Sydney.

Come Origin time, though, they were all in maroon jerseys, dishing it out to NSW.

Some even tried their hand at other codes, like Israel Folau and Karmichael Hunt in AFL, Valentine Holmes in NFL, and players including Peter Ryan and Willie Carne in rugby union. 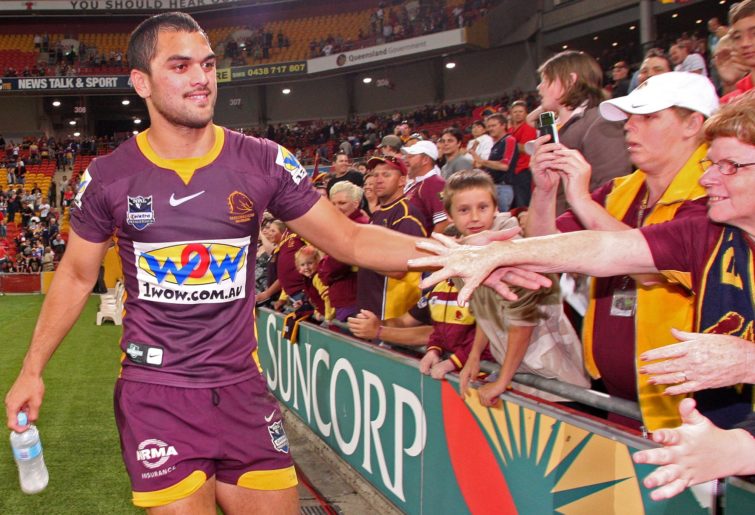 The third group is more interesting, though.

These are the State of Origin players who spent their whole careers in rugby league north of the Tweed River.

Not for them the bright lights of Sydney, the bleak weather of Melbourne, or the chilly winters of the UK.

Born and bred in Queensland, they saw no need to leave their home state, and their careers flourished in the warm northern climes.

They also stuck firm to rugby league, the greatest game of all, and resisted the temptation to ever switch codes to rugby union, AFL, or some other minor sport.

I call this group the ‘true blue Queenslanders’. They are Queensland’s State of Origin elite, and there weren’t that many of them. Less than 20 of the 217 Queensland Origin players satisfy the following criteria:

Just to illustrate the quality of the players in this group, here’s a team made up from their number:

1. Brad Backer: born in Maryborough. 3 Origins. Played his senior football with Brisbane clubs Wests, Easts Tigers and Wynnum Manly. A strong performer on the wing who could also play fullback and centre.

2. Ty Williams: born in Innisfail. 3 Origins. 151 games for the Cowboys. A prolific try scorer with great speed and footwork.

3. Bruce Astill: born in Brisbane. 1 Origin. A Souths Magpies stalwart. A powerful runner who was equally at home in the backline or the back row.

4. Michael Morgan: born in Townsville. 12 Origins. 168 games for the Cowboys. A very clever player who could play with distinction anywhere in the backline.

5. Jharal Yow Yeh: born in Brisbane. 3 Origins. 60 games for the Broncos. Outstanding player with freakish skills whose career was cut short by injury.

6. Darren Lockyer: born in Brisbane. 36 Origins. 355 games for the Broncos. A brilliant fullback who became an even better five-eighth. No better player in the game.

7. Mark Murray: born in Brisbane. 15 Origins. Played his senior football in Brisbane for the Norths, Valleys and Redcliffe clubs. A skilful player who always seemed to get under the opposition’s skin.

8. Matt Scott: born in Longreach. 22 Origins. 268 games for the Cowboys. One of the best forwards in the game who always made the hard yards for his team.

9. Greg Conescu: born in Brisbane. 20 Origins. Played for Norths (Brisbane), Brothers (Gladstone), Redcliffe and the Broncos. A skilful hooker who was always in the game.

10. Shane Webcke: born in Leyburn in the Toowoomba region. 21 Origins. 254 games for the Broncos. Tough, resilient, and one of the greatest front rowers of all time.

11. Corey Parker: born in Brisbane. 19 Origins. 347 games for the Broncos. One of the best forwards of the modern era who combined grit with skill.

12. John Buttigieg: born in Townsville. 3 Origins. 101 games for the Cowboys. One of the biggest forwards going around and built like a brick outhouse.

13. Rohan Hancock: born in Toowoomba. 5 Origins. Played with the Toowoomba Wattles and the Easts Tigers. A solid performer who loved the tough stuff.

So, there they are.

Roarers, can you think of any other true blue Queenslanders who meet this criteria?