It was part of a workplace transition plan to take over from head coach Mick Malthouse in 2012. Malthouse then moving into director of coaching, affording a graduated transition over four years.

The aim: to ensure Buckley could learn as much as he could from one of the best coaches in the game.

When asked how Buckley’s transition would proceed, journalist Bruce McAvaney reported Malthouse offered: “Nathan will be given latitude and be accepted by the players initially, because of who he is and who he was… as a player!

“But as time goes on, the players will ask: ‘how is Nathan going to help me get better?’ It’s how Nathan answers that question, will determine if he will transition from great player to great coach!”

Ex-players gifted professional coaching roles without doing the ‘yards’ can be problematic. One reason is the way professional programs are structured – players seldom have to think too far outside of their role.

Yet even assistant roles at professional level require interdependent understanding.

“The problem with coaching now is that players are being taught by ex-players and not teachers.

“You see a lot of guys from my era that were ex-teachers, it definitely gave us a head start as we knew how to organise a group.

“Knew how to speak to them… you go into any classroom, and you try to work out the three or four kids who are either going to make the class good or disrupt the class and you try to establish a relationship with them.

“It was the same at the Brumbies, understanding which players were going to be influential, establish a relationship with them and which players maybe I needed to move on, and getting those mechanics right.”

While directly referencing teachers, looking at his mentors, he is also referring to coaches who ‘teach’.
For example, Bob Dwyer, whose career was in real estate. Jones (as did Dwyer) had another mentor – himself a great teacher despite not being formally trained in the profession.

Cyril Towers is regarded as the ‘father’ of Randwick rugby.

The 1977 Matraville High rugby team was a fine example of Australia’s multiculturalism. An eclectic mix of ethnic and first Australian backgrounds.

“When I watched the two teams come out, it looked like a scene out of an American movie. We were seeing kids from the wrong side of the tracks trying their hand against the superstars.

“One team ran out beautifully attired, fit, strong and healthy. The other – skinny legs and socks around their ankles.”

Five players in the Matraville team have since gone on to change the face and fortunes of Australian rugby. The Ella Brothers, Mark, Glen and Gary; Lloyd Walker and Eddie Jones.

For ex-players who successfully transitioned to enjoy long-term coaching careers, there are some common themes:

1. They started coaching either in school or club rugby and worked their way through to professional ranks
2. They were coaching while they were playing:
a) Rod Kafer was the first player-coach to win a Super Rugby title and Heineken Cup with the Brumbies and Leicester. Further, Phil Kearns in 2000 stated that Kafer was pivotal in Australia’s World Cup win in 1999, despite not featuring as a player during the playoffs.
b) Dan Palmer and Ben Mowen both coached the Brumbies scrum and lineout, respectively, while still playing between 2012 and 2014
3. They were part of environments where significant ‘workplace learning’ was a feature.

Similarly, Laurie Fisher further recognised and enabled the same in Palmer and Mowen.

Emotional quotient is an attribute common among the ‘great’ coaches.

Why? Because the best coaches don’t have to be the smartest in the room. They recruit, develop and enable world-class expertise where gaps are in their programs.

But first, they need to be generalist enough to know where the gaps are. Then they need appropriate expertise to coordinate all interdependent variables in one direction.

Why then would Buckley not want one of the great all-time coaches around? Was it insecurity?

The Brumbies have been gifted a massive opportunity, in the future development of their people, through Dan McKellar’s deserved promotion to the Wallabies.

McKellar is one of the great stories of resilience and having an optimistic mindset.

He started as a country rugby player with Burdekin Canetoads, progressing to colts, then premier grade at Souths in Brisbane.

From Souths and at the ripe old age of 29, he received a contract with the Reds.

When transitioning to coaching, McKellar didn’t take the easy option.

Instead, he started back in club rugby to learn the trade, initially as an assistant under Souths legend and mentor, Ian Cameron.

He led Souths to a grand final in 2009, before transitioning to full-time head coach with Tuggeranong Vikings, Canberra in 2011.

Won two premierships and an Australian Club Championship with Vikings (defeating both Sunnybank and Sydney University).

Laurie Fisher, intrigued as to whether Vikings’ success was recruitment or coaching-based, watched them train in mid 2012.

He returned a McKellar fan, estimating that they moved around the field at around 20 metres per minute faster than other club sides. McKellar’s athletic performance coach, Ben Norcott, was a big part of this, as well.

In late 2013, Fisher’s first act as Brumbies director of rugby was to poach McKellar from Japan.

Under the banner of ‘workplace learning’, I have previously highlighted the importance of head coaching at Premier Club level as a contextual steppingstone to becoming an elite rugby head coach.

Another part of McKellar’s effective transition from assistant to head coach at Super level was Stephen Larkham occupying dual roles with the Wallabies and Brumbies from 2015.

This afforded opportunity, in conjunction with athletic performance guru Ben Serpell, to coordinate the Brumbies program in Larkham’s absence.

The key being through the off-season and without ‘game’ pressure that can overwhelm and affect decision-making.

Serpell’s influence during this period can’t be underestimated.

While head of athletic performance from 2016 until the end of 2019, the Brumbies were able to achieve two seasons where player availability for training and games was above 95 per cent.

Additionally, during the season, individual players improved across all physiological markers. Arguably the world’s best metrics across any sport, let alone a heavy collision sport.

This is a key measure (outside of traditional win-loss) of ‘programming’ effectiveness.

The other is injuries. During this period, the Brumbies were the best prepared and least injured.

Larkham recognised he had a world-class coaching team (others included John Pryor – consultant, athletic performance, Peter Ryan – defence and Dan Palmer – scrum) and while setting the structure for responsibility, he trusted each, to interdependently contribute. 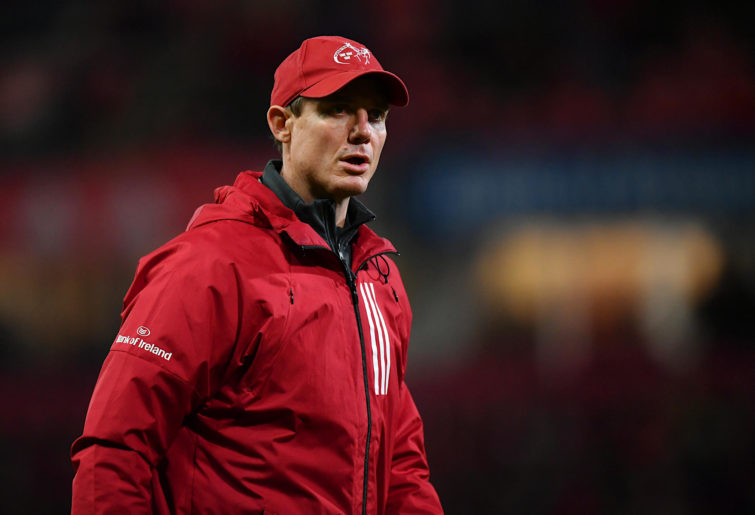 In leading the Wallaby forwards, McKellar will be afforded the opportunity to experience the requirements at that level and take the learnings back to the Brumbies at completion.

McKellar’s world-class expertise is matched by the other coaches within the Wallaby setup, all bringing an eclectic mix of variety in strengths:

There will, however, be greater diversity of views of effective player and team preparation within this group than Dan has been used to in recent years.

Post the 2007 World Cup, Robbie Deans was favoured to take over as All Blacks head coach.

Stating he was happy to play under either (head coach), he expressed concern (to the board) that Deans would surround himself with support staff who wouldn’t challenge him.

Under Henry, the coaching group challenged each other constantly – always in search of the best result. McCaw felt it was one of their strengths.

Deans, on the other hand, had a history of falling out with and then replacing his assistants.

History shows that New Zealand Rugby Union’s strength in supporting that coaching group led to the All Blacks becoming one of the greatest teams in the history of all sport.

I am a massive fan of Dan McKellar. I hope that this change of scenery will propel him to the next level in his coaching.

There is an argument that they could be one voice in a coaching room which may drown out others, particularly with a talented, but relatively young coaching group.

With McKellar’s Wallaby appointment, the Brumbies have a wonderful opportunity for workplace growth in their high performance staff.

It’s inevitable that being an assistant again will bring (slightly) less pressure.

With a little more room ‘upstairs’, my hope is that McKellar is able to reflect on the benefits of an eclectic environment where shared ideas and debate is a feature, then encourage more of that from his less experienced assistants on return to the Brumbies.

Laurie Fisher, aside from being one of the world’s best coaches, has also been an incredible mentor to many. Mowen and Palmer are examples. The one thing missing from his career at the moment is international coaching.

If McKellar continues his improvement, he is in pole position to be the next Wallaby coach. That potentially forbids opportunity for Fisher to cap off a remarkable coaching career, by finally realising that dream.

If there was ever a time that bucking the trend of hopelessly short term thinking in rugby (in general), this is it for the Brumbies leadership!

The easy option would be to say, “Lord, you run the program while Dan is away.”

What is the pitfall of that? A potential disaster in IP dissolution post the 2023 World Cup (if both Fisher and McKellar move on).

What is the alternative and what are the potential benefits?

With no NRC and effectively five months before the start of the next pre-season, there is opportunity to provide each member of the coaching group with extra responsibility without the suffocating stress and decision limiting, week-to-week game pressure.

Allow them to develop appreciable voice and contextual experience that will more greatly serve the organisation, both within the coaching room moving forward and also two years down the track when change is more than likely.

It will allow Rod Seib to step up with relevant contextual program management experience, similar to that of McKellar in 2017.

What else can potentially be gained?

With Fisher in an over-arching avuncular role, the ability to look from the outside in.

Innovation has always been at the heart of the Brumbies:

They have the personnel, and the time is right for the next evolution.