Four talking points from AFL Round 14

Five games in a round – all but one of them a bit meh – made for a particularly slow weekend of football.

There’s nothing better than a win after the siren – and now Gary Rohan has done it twice
I’ll admit, I’d missed the first half of Friday’s epic and then spent much of the second half only half paying attention to the game playing on a TV screen above the table of the restaurant I was in. It is fair to say I was absolutely engrossed for those final minutes, as a Toby McLean goal looked to have sealed it for the Doggies.

A desperate Zane Cordy kick out of defence fell into a dangerous open space, allowing Cam Guthrie and Isaac Smith to combine and send the Sherrin into the marking hands of Rohan. For the second time in his career – the first as a Swan against the Bombers – he had a chance to put his side ahead. And he did, with a perfectly weighted kick that sailed through.

It was the perfect complement to a really good game, which could very well have been a grand final preview. The week before last, it was Geelong’s strength up forward – the Tom Hawkins, Rohan ‘n Jeremy Cameron trio – that was the difference between themselves and Port Adelaide. Up against the Bulldogs’ second best-in-league defence, it was unlikely that trio were to have the same effect – Rohan obviously excluded. Hawkins and Cameron kicked just three goals between them.

The Doggies’ would be pissed with the loss, but any sane observer would be foolish to discount their performance. A messy first term (for both sides) excluded, the Dogs played strongly enough to manage to hold extended leads throughout much of the game, but McLean’s late goal failed to be the definitive nail in the coffin they had hoped for.

It’s just a pity there were only 6000 odd fans in the house to see it play out.

The Giants may just lead the pack of teams gunning for finals – if they survive a tough fixture
There are a few teams in the running to sneak into any potential finals spots that could be vacated; some legitimately, some more hopefully.

There’s Fremantle who, with a run of easier games in the next few weeks, might be able to accumulate some ground. There are the Bombers, who are still two games outside the eight but have a reputable claim to make finals if they continue their form. There are, technically, the Crows and Saints duo – but I’d sooner expect to see Freo win a premiership than either of those two teams make the finals this year.

But it’s very evident at the moment that it’s the Giants who are the best side not in the top eight at the moment. No side deserves too many plaudits for defeating a dreadful Carlton. But their results over the prior fortnight see them sit narrowly outside the eight, and despite an indifferent beginning of the season, the Giants are well primed to challenge for a finals spot.

If you’re looking at their schedule for the remaining rounds, they face more finals teams than non-finals teams. Games against Melbourne, Sydney, Port, Geelong and Richmond – while also having to navigate an encounter with fellow contender Essendon – leave them with only three clashes they should be winning easily (Hawks next weekend, the Suns and Carlton in their last home-and-away encounter). That is an undoubtedly difficult fixture for the side.

The fact that Port ‘only’ won by 50 points is a problem
At the end of the third term of Saturday’s match at Metricon Stadium, the Suns had kicked just 16 points, and their opponent’s score read 74 points. That’s a 58-point lead with another quarter to play, and given how horribly the Suns were playing, it should’ve been as easy as pie for the Power to dominate the final term.

Instead, they put the cue in the rack and kicked just a single extra goal, allowing the Suns – who had, for much of the game, been stifled by a sublime Port defensive unit – to essentially double their score in the final term.

It does sound pretentious to even be criticising a team’s 50-point win, but it isn’t the first time the Power have let a dominant lead slip – just look back to wins against the Dockers and Blues earlier in the year where Port seemingly switched into a kind of perseveration mode rather than staying ruthless and going for the kill. The team regularly gets itself into dominant situations before settling for just enough to be considered a comfortable win – and no more. 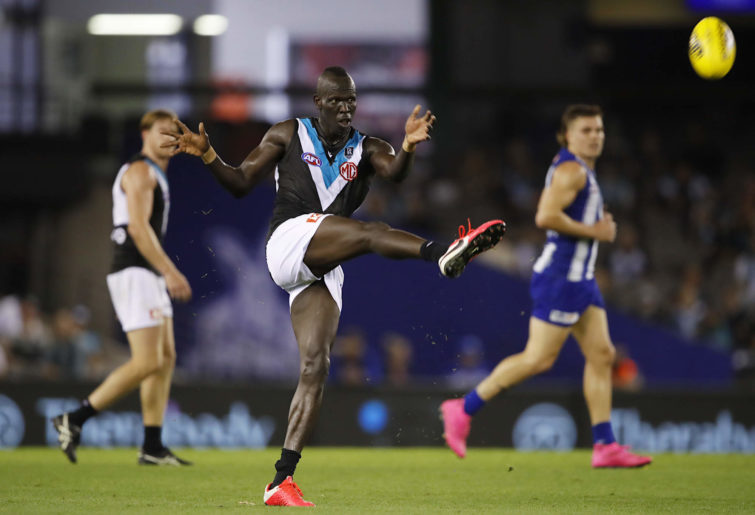 Given the win, it goes without saying there was plenty to like: Aliir Aliir has rapidly become a stellar defender, Connor Rozee remains a delight to watch and Robbie Gray was deservedly playing his 250th game (prior to his injury). I cannot say as much for the Suns though who, despite Port’s late fadeout, looked horrendous.

Keeping the foot on the accelerator is something that does not only affect the Power, and it has not precipitated disaster as yet, but they’ve simply got to be more ruthless if they want to be known as an authentic contender.

For the Kangas, troubling teams without winning is their apparent specialty
If the term ‘honourable loss’ has been the near-exclusive domain of a certain other Victorian club over the last few years, it is certainly fast becoming the Kangaroos’ 2021 trademark. The difference here is that despite the moniker generally being used as a cover for poor performances, the Kangas are legitimately producing performances that punch above their weight.

They certainly did that against the Lions, leading the Queenslanders by two points at half time and continuing to pester them right up until the fourth term, where they faded out a little. It wasn’t as complete a performance as their draw against the Giants last week – those two premiership points as good a warning as possible at the moment to the competition to not be complacent – but even Chris Fagan managed to acknowledge North’s impressive game and needed to urge his team to respond after halftime.

It isn’t just the last two weeks. The Kangaroos led at the final break against the Crows in Round 4, briefly worried the Cats a week after that, infamously were leading the Demons at half time in Round 7, were competitive against the Pies in Round 8, defeated the Hawks in Tassie and prevented the Saints from garnering a truly pressure-relieving win three weeks back.

They might not be winning – which is, ultimately, the most integral part of the sport – but the club are losing no admirers for the way they’re steadily improving as the season goes on.

Everybody gets a turn
Brisbane Lions
Is there a nicer man in footy than Chris Fagan? Actually asking here.

Carlton
Not for the first time, there isn’t much to say. I genuinely struggle to pick a game in the rest of the season they’d be more than a slight chance at winning – now that I’ve said that, watch them beat the Dockers by a goal in two weeks’ time.

Essendon
Jake Stringer looking in the form of his life. Loving his stuff and loved his game yesterday – 29 touches and four goals.

Geelong Cats
Games against the Lions and the Bombers in the next fortnight, if they’re anything like Friday’s game, should be fantastic to watch. And who honestly knows who’ll win them.

Gold Coast Suns
North up next. I’m not backing them to win it, but they really, really need to if they want to salvage a season rapidly spinning out of control.

GWS Giants
Toby Greene is perhaps the best example of a controversial yet fantastic player. Glad he was only fined for his hit, ecstatic at witnessing that 67-metre torp. I maintain he should be the team’s permanent captain.

Hawthorn
The effort was undeniably there, but the polish was missing.

North Melbourne
A second consecutive game in the Apple Isle coming up next Saturday – and they should be winning against the Suns.

Port Adelaide
Sydney, Hawthorn and Melbourne in the next few weeks. They’ll beat the Hawks, but something worries me about the other two – regardless of the fact they’re both in Adelaide.

Western Bulldogs
Oh so close. It was nice to see the Toby McLean back in the red, white and blue after a long injury layoff – and he was almost the hero.