The popular Darwin Triple Crown was given a warm welcome, amidst the typically summer-like conditions – which saw some great racing unfold across the three-day weekend. Here are the talking points from Hidden Valley Raceway.

Mostert rewards new contract with win
Coming into the weekend, there was confirmation from Walkinshaw Andretti United that they had retained 2014 Bathurst 1000 winner Chaz Mostert’s services going into the future – with a fresh multi-year deal being inked.

The 29-year-old then rewarded this renewed faith from the Victorian-based squad, with a sensational win during Race 12. This ended up being the first time that the Walkinshaw outfit had won in Darwin since 2008 and Mostert’s maiden since 2015.

Adding to his Race 8 win in Tasmania earlier in the season, Mostert shot up from eighth on the grid as the leaders befell drama on the first lap of the race. Pole sitter Anton De Pasquale was wiped out at Turn 1, with Mark Winterbottom also involved after a shaky start.

Championship leader Shane van Gisbergen made a lunge for the lead on the first lap into Turn 1 and cleared the field after the carnage. It wasn’t until his mandatory pit-stop on Lap 22 that misfortune ended hopes of another victory – as the left-rear wheel nut became stuck.

This allowed Mostert to inherit the lead which he extended to a mighty 12-seconds over Cameron Waters, as van Gisbergen re-joined the race at the rear of the field and eventually raced back to 13th. 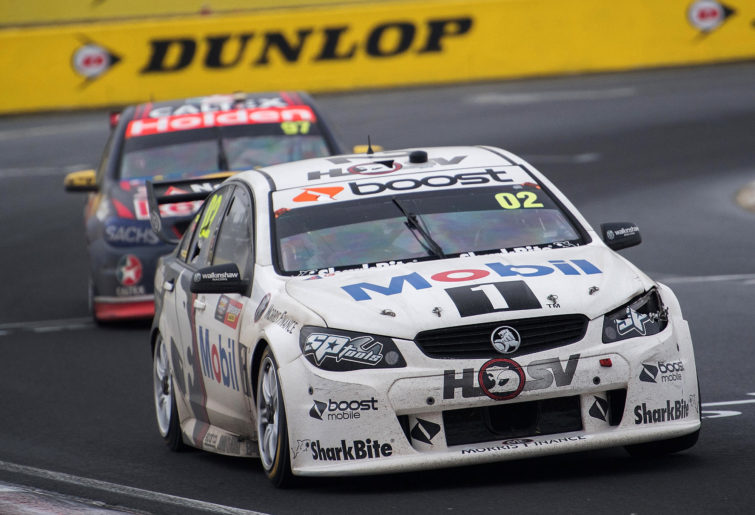 When does Bathurst 2018 get underway? (Photo: Daniel Kalisz/Getty Images)

Nick Percat ended up completing the podium, despite being under a cloud over an investigation into minimum tyre pressures on his Brad Jones Commodore. This investigation was cleared heading into the first of Sunday’s doubleheader, allowing the former Bathurst winner to retain third.

Staying within touching distance of the championship-leading Red Bull Commodores, Mostert did state during the telecast that a more balanced car between qualifying and the race is still needed. Though it is incredibly pleasing to see this partnership yielding wins, which would have been their goal when Mostert was lured away from Tickford in 2019.

Mostert also was declared the overall round winner, claiming a fourth and fifth-place finish on Sunday to complement his Race 12 win.

Polesitter Anton gets torpedoed
De Pasquale’s raw speed in 2021 cannot be faulted, though it has been an incredibly difficult season for the race winner from The Bend, in his maiden campaign for the legendary Dick Johnson Racing.

Claiming pole position for Race 12, the 25-year-old made it no further than Turn 1 as he was hit twice by not only one Team 18 Commodore, but both of them. Another non-classified result meant that De Pasquale slumped to as low as tenth in the standings.

It all started when Winterbottom from the front-row of the grid pulled second gear on the start, with the Irwin Tools Commodore struggling with electrical gremlins pre-race. Van Gisbergen made a rocket start from third to leapfrog De Pasquale, who ended up leaving the door open for Scott Pye to turn the Shell V-Power Mustang before Winterbottom made the finishing contact.

The pole-sitter was then in the immediate path of the collateral damage in the form of Todd Hazelwood, who collided head-on with the De Pasquale Mustang. Jack Smith and both Tekno Team Sydney cars were also impacted as the safety car sought to have the carnage cleared.

Pye was handed a drive-through penalty and ended up at the rear of the field, with only his devasted teammate Winterbottom classified behind. Hazelwood, Smith and Fabian Coulthard all also had their races ended with the subsequent damage.

Another fast start for van Gisbergen
The championship leader in Race 13 started up on the front row alongside polesitter Will Davison and once again like Saturday, made a great start to lead the race coming out of the first corner.

Even though the initial start was even with Davison, van Gisbergen stamped his authority on the Shell V-Power Mustang early enough. All before Winterbottom from fourth sought to go bold around the outside of Turn 1 and challenge the Kiwi for the lead.

Frosty, unfortunately, got a tap from his old rival in Jamie Whincup and had slight oversteer in the middle of the corner, which saw the 2015 Supercars champion then fall behind both the Shell V-Power Mustangs of De Pasquale and Davison.

Van Gisbergen enjoyed a healthy lead as he did during Race 12, before the mandatory pit-stop on Lap 14 which unlike Saturday went routinely, allowing him to emerge back at the front of the pack.

The fast-starting Kiwi found the chequered flag 1.5 seconds ahead of polesitter Davison, while the final spot on the podium was closely battled over by Mostert and Whincup, with the latter prevailing to have two Red Bull Commodores on the podium.

Mostert from eighth on the grid elected to undercut the field and did make some initial gains, while Whincup did the opposite by pitting on Lap 20 and then utilised the great race pace from his Commodore. The pair swapped paint and provided some spectacular images.

Tale of woe in the Top End
While there was a lot to celebrate during the Darwin Triple Crown for the Red Bull team and Mostert, there was plenty of not so memorable moments across the weekend. It seemed that the tales of woe took the highlights this round, with many driver and team combinations having miserable runs. 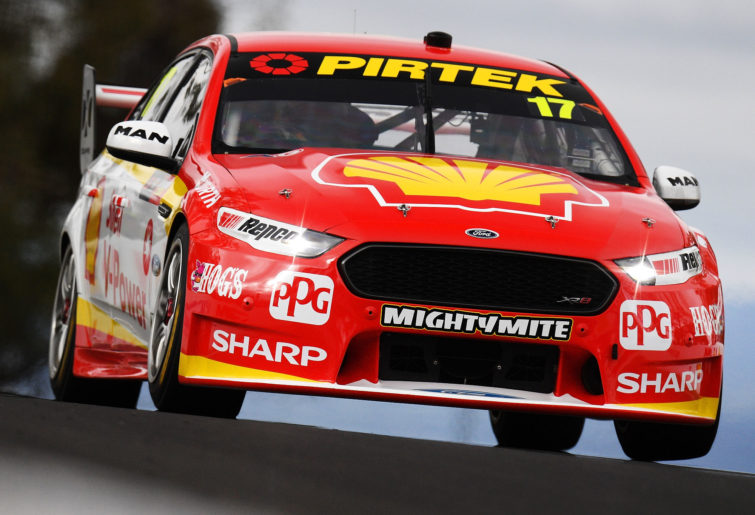 De Pasquale takes the cake with his weekend of misfortune and mistakes. Whilst it was unfortunate that Race 12 saw the Shell V-Power racer taken out of contention by his rivals, a stall in the pit lane in Race 14 and then running wide later in the race was all driver error.

A shame, as the commentary team also remarked as De Pasquale boasts such great speed and has been excellent in qualifying. Though converting those starting positions into solid race results, has been something lacking in the youngster’s repertoire.

Even his teammate Davison, despite finishing twice on the podium, failed to execute his starts from pole position in the way van Gisbergen was able to in order to win the races. A trend hopefully the Shell V-Power outfit can rectify in the coming rounds.

Hazelwood’s weekend for Brad Jones Racing didn’t improve either from the Race 12 first lap incident, with salt being applied to the wound in Race 14 – where he was slapped with a 15-second time penalty for turning David Reynolds around, while wrestling for position.

As was the case for Pye, who claimed Team 18’s maiden podium finishes at this event last year. 2021 unfortunately saw a complete opposite in fortune, with a pit-stop drama in the final race laying waste to a weekend in which Team 18 had plenty of potential to secure top three results.

Even for the Kelly Grove Racing team it was a complete 180-degree contrast to their successful weekend at The Bend Motorsport Park last month, where Andre Heimgartner secured his first career win to Hidden Valley where they failed to qualify in the top ten and also fail to achieve a race result higher than 15th. 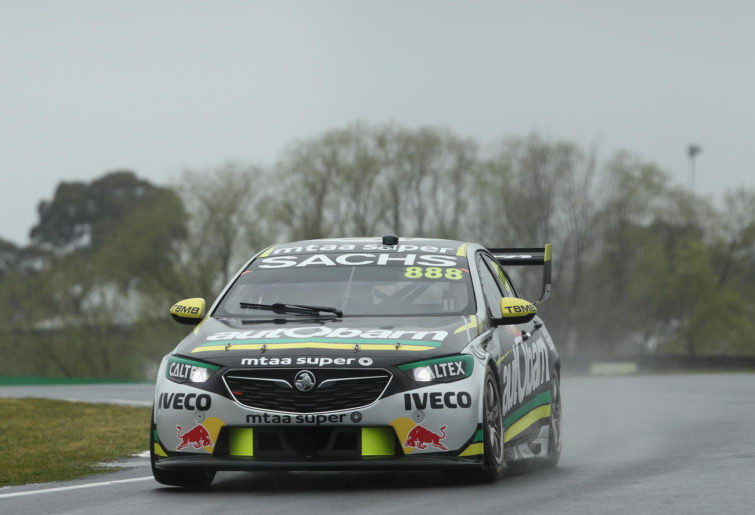 A fortnight’s turnaround until the next event on the hybrid street circuit in Townsville will surely see these outfits do some soul-searching. As motorsport teaches us one thing, is that you can easily be left behind and this where the consistency in execution from a team such as Red Bull in 2021 should be used as an example.

SVG still looking mighty in the championship
Mostert may have been declared the overall round winner, but a pair of wins for the championship leader on Sunday sees the lead in the points standings stay quite healthy for van Gisbergen.

221-points is the margin now between the 2016 Supercars champion and his seven-time championship-winning teammate in Whincup. Mostert is only nine points behind the second of the Red Bulls and between van Gisbergen at the top and Waters in fifth there are 297 points.

Still, the total gap is within a round’s worth of points, being under 300. However, with a performance like van Gisbergen’s on Sunday, having bolted from the start to eclipse polesitter Davison again for the victory, more will be needed from his rivals.

Davison attempted to undercut the leading Red Bull, however, on Lap 17 they pitted van Gisbergen and sent him back on track with a lead of almost two seconds over the two-time Bathurst 1000 winner.

An eighth win for van Gisbergen in 2021 also sees the Kiwi equal the record of total wins of the late great Peter Brock with 48.