For those who were too busy nursing a Boxing Day hangover to notice the story, Fifita “breached the NRL Rules when he entered the premises of a home, which he did not reside in” on December 27 last year.

The Australian reported at the time that “he was invited to the home by a woman he knew but accidentally went to the wrong room with a different woman inside”.

So a case of wrong room, wrong time – which is an error plenty of people have made innocently enough, particularly after they’ve had a few post-Christmas libations.

The outcome was Fifita getting arrested but released without charge – so, again, pretty tame as far as off-field incidents go.

As for why we’re still talking about it some six months after the fact, that’d be because the governing body only came down with a punishment for Fifita last week.

“Although it was accepted that Mr Fifita believed he had been invited to the home, his conduct in immediately entering on his own showed poor judgment and fell significantly short of his obligations as an NRL player,” the governing body said in a statement released last Wednesday.

For “breaching the game’s Alcohol Code of Conduct and bringing the game into disrepute”, the Queensland backrower was slapped with a $20,000 fine, of which $10,000 has been suspended for 12 months.

All of which is probably fair enough – given Fifita has form in this department, having spent time behind bars for another confusingly reported incident in Bali, a five-figure fine was about what he deserved.

But what caught my attention was the final two paragraphs of the statement (which, based on the fact they were at the bottom, was the part the NRL likely hoped most people wouldn’t take note of):

“The Gold Coast Titans have been cautioned for not promptly disclosing the club’s payment for a security system which was installed in the home after the incident. Fifita is paying for the cost of the system personally, in addition to his fine.

“There are no salary cap implications relating to this matter.”

So the club made a payment to a third party on behalf of the player and didn’t report it to the governing body? That, my friends – despite the NRL’s protestations to the contrary – is a fancy way of saying the club breached the salary cap.

No, the money didn’t go directly into David Fifita’s bank account or wallet, but the club paying for players’ expenses – say, by paying for their boat, car or home renovations – in part saw the Melbourne Storm stripped of two premierships.

And the NRL have acknowledged that there was an issue on the Gold Coast, because you don’t receive a caution for doing the right thing.

Now, obviously a home security system isn’t a massive cost but the problem isn’t the bottom line, it’s the action. And there is no way a club in the NRL thinks paying a few grand for a player’s expense isn’t a salary cap issue – it’s not quite a brown paper bag full of cash in a Macca’s carpark, but it’s at most one step below that level of clear-cut.

Like, this is an obvious financial incentive – Fifita got in trouble and the Titans pulled out the chequebook to make it go away – all for a guy who’s getting well north of a million bucks a season, so it’s unlikely this was a case of him being a bit short of cash when it came time to buy the security system.

And that Fifita has ultimately footed the bill is part of the problem – the NRL spent six months investigating the issue to simply get the outcome that should have occurred in the first place, which is why the club needed to be slapped with an actual punishment.

Jobs at the NRL have been slashed as a result of COVID, yet resources – seemingly significant resources, given this was an announcement half a year in the making – were spent getting to the bottom of what should have been an open-and-shut case of drunk bloke making amends for his foolishness.

So how about the Titans payback the governing body the salaries of whoever had their time wasted chasing up a small but clear breach of the salary cap? 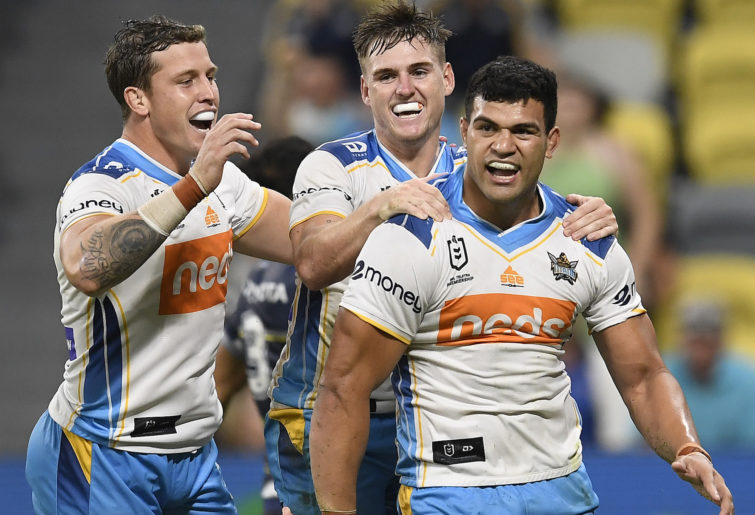 It’s not completely without precedent in the NRL, with the judiciary offering reduced penalties for players who take an early guilty plea – basically, admit you’ve done the wrong thing and don’t waste our time with a process proving that’s the case, and you receive a lighter punishment. Surely that opens the door in the inverse situation?

But if asking clubs to pay for the time they waste is seen as opening a can of worms – and, let’s be honest, it’d wipe out half the clubs’ annual grant if implemented seriously – let’s take a far more cynical view towards the Titans’ actions.

At best, this was a level of naivety that is reflective of poor corporate governance, which suggests they may have done something of this nature before without realising it, which warrants further investigation.

At worst, they wilfully circumvented the salary cap, which suggests they may have done something of this nature with complete awareness of it, which requires further investigation.

Or we simply say that the Gold Coast Titans made a small-scale breach of the salary cap for which they are required to pay a financial penalty that acts as a stick against them doing it again.

You know, like how the NRL treats other salary-cap breaches.